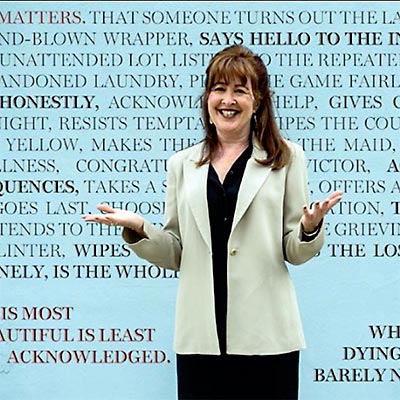 Successful authors know it is imperative to hone their craft through continuing education, to network with industry professionals and to stay abreast of the ever-changing publishing landscape. For 27 years, the state’s longest-running writing event—the TMCC Writers’ Conference—has consistently delivered relevant training and networking opportunities. This year’s conference will be held Saturday, April 8 from 8:30 a.m. to 4:30 p.m. at Truckee Meadows Community College, 7000 Dandini Blvd., in Reno.

Writers’ Digest Books Editor (and past TMCC conference speaker) Chuck Sambuchino said this about the TMCC Writers’ Conference: “I’ve taught at more than 90 conferences over the past 9 years and the TMCC event holds up as one of the finest. It’s large enough to pull in quality presenters who can help writers get the best instruction, but not so large to feel like a cattle call. At the event, it feels personal. The organizers recognize it’s the little things that matter—i.e. the connections, the pitching and the instruction people need.”

The TMCC Writers’ Conference offers a casual atmosphere where interaction between the speakers and participants is encouraged. Participants can attend a full day of instruction for $129. This event offers:

“Creating Believable Characters” by Laura McBride, literary novelist
Laura’s first novel We Are Called to Rise (Simon & Schuster) has received accolades from Library Journal, Entertainment Weekly, Redbook, Kirkus Review and more. Booklist wrote, “Without question, McBride is truly a commanding literary presence.” Her book was a Discover Great New Writers selection for Barnes & Noble. Round Midnight, her second book, will be released May 2.

“Building Dialogue from Real Stories” by Cathy Scott, true crime author
Cathy, a Los Angeles Times bestselling author, has won dozens of awards. She’s written more than 10 books including The Killing of Tupac Shakur and Murder of a Mafia Daughter. Author Ann Rule described Cathy as “a star writer in the crowded field of true crime.” She’s been interviewed on “Dateline NBC” and the “Today Show,” and her work was included in Vanity Fair’s crime series. Journalistic assignments have taken her from Somalia to Panama.

“Transforming Nonfiction into Fiction” by Celeste León, novelist
Celeste’s debut novel, Luck Is Just the Beginning, was inspired by a true story and earned the Mariposa Award for Best First Book in the 2016 International Latino Book Awards. She’s also been named one of the “Ten Latina authors to read and watch by the Latina Book Club of New York.” Her short stories have appeared in Chicken Soup for the Soul and The Preservation Foundation.

“From Idea to Execution: Crafting a Novel or Series” by Tracy Clark, young adult novelist
Tracy has written four novels including the paranormal Light Key Trilogy—Scintillate, Deviate and Illuminate (Macmillan)—and the YA thriller, Mirage (Houghton Mifflin Harcourt), which came out in 2016. Her work has been praised by Booklist, Kirkus Review and the School Library Journal.

In addition to successful authors, the TMCC Writers’ Conference presents the “Agents Panel Discussion,” an opportunity for the audience to ask about the latest developments in publishing and how to pitch to a literary representative. This year’s agents are Jen Hunt from the Booker Albert Literary Agency, Jennifer March Soloway from the Andrea Brown Literary Agency and Jennifer Chen Tran with Fuse Literary.