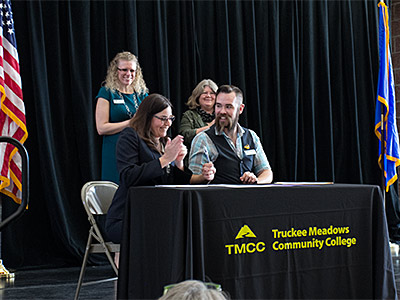 Karin Hilgersom, PhD, TMCC President, and David Turner II, President of Student Government Association (SGA), will be signing the Resiliency Commitment on behalf of the College.

“Dr. Hilgersom is a vocal champion of equitable sustainability,” said Jill Atkinson, Director of TMCC's Equity, Inclusion and Sustainability Office. “She is well versed in the subject and perceptive of the power that higher education can wield in cultivating and shaping a long-term view of a sustainable society.”

The Resiliency Commitment is a pledge to build a sustainable global future through leadership networks in higher education. Second Nature's climate leadership commitments are made by higher education officials toward positive changes at their institutions and beyond.

“Signing this commitment helps support the College's work to build greater community capacity to adapt to the changing climate and progress toward carbon neutrality,” Atkinson said.

“I hope that future prospective students will see the steps we’ve taken into sustainability and becoming leaders in this effort,” he said. “Along with the variety of classes, the diversity of students, and the compassion of our faculty for students—these are the reasons why we’re the better choice of where to attend college. TMCC is trying to be at the forefront, ahead of the game in being carbon neutral."

“This commitment is a public acknowledgement of the power TMCC has to increase its flexibility, adaptability, inclusiveness, and capacity in cultivating a healthier, more resilient and sustainable campus, community and world,” Atkinson added.

Since 2004, TMCC has established procedures toward greater sustainability:

“In the last ten years we have reduced our grid-based energy consumption by 20 percent, started a recycling program and practically eliminated use of chemical insecticides on campus grounds,” said Dave Roberts, Executive Director, Facilities Operations and Capital Planning.

Chemical insecticides are no longer sprayed on landscaping at TMCC, but occasionally organic products and methods, including the release of lady bugs, are used to control insects.

TMCC has also been one of the first colleges in Nevada to participate in a NV Energy study comparing TMCC’s energy usage to other buildings nationally.

The energy benchmarking report by NV Energy states that TMCC is using less energy than many other institutions in the same climate conditions. The study compared overall energy usage from 2013-14 for 53 colleges and universities in similar climates, and rated TMCC at number 10, lower in energy usage than 43 other institutions.

Retrofitting lights and appliances with newer energy-saving models has cut the College’s power bill, as well. TMCC replaces or retrofits appliances, HVAC systems and lighting when they become old and need replacement. Power-efficient LED lighting was installed at the new east parking lot prior to Fall Semester.

Due to generous rebates from NV Energy, TMCC installed solar panels in 2012 and 2013 on the rooftops of the Vista and Sierra Buildings at no cost to the College. The arrays can be tracked on the Web for the amount of energy they produce. Online dashboards for solar arrays may also be viewed for the panels installed in 2009 at Applied Technology Center and in 2014 at Meadowood Center.

During the first two weeks of Fall Semester, 1,000 refillable BPA-free plastic water bottles were passed out to students. The bottles can be reused at 11 filtered water bottle filling stations located on four of the five College sites.

“There’s a counting feature in the stations that lets us know how many single-use bottles have not been added to the landfill,” Atkinson said. “The stations will minimize the water that goes down the drain—in contrast to the use of a water fountain.”

With this latest commitment, TMCC is renewing its ACUPCC pledge that was first signed in 2008, along with almost 700 other colleges between 2007-2010. For information about sustainability at TMCC, please contact TMCC Equity and Inclusion at 775-673-7027.