The Boy Who Spoke With Animals, a Musical 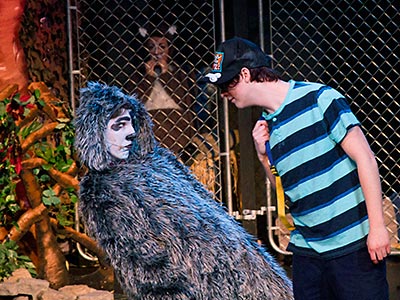 "The Boy Who Spoke with Animals," by Colin Ross is showing on Dec. 2 and 3, and is presented by TMCC Theater.

Feathered, whiskered and fleecy animals scamper into a huddle on stage and ask each other “Do humans see in color,” and “Do they have a sense of humor?”

The bemused squirrel and crow and black sheep of TMCC Theater’s production of “The Boy Who Spoke with Animals” wonder, “Do humans have a sense of smell … it doesn’t seem like they have a very good one.”

They speculate about other characteristics of humanity with thought-provoking perspectives. This highly visual show is fast-moving—choreography and songs flow throughout as each animal expresses its own colorful spirit in song. The musical’s tagline is “A musical for young audiences and young minds alike” and is a show for the entire family.

“The Boy Who Spoke with Animals” is written and composed by Colin Ross of Reno. This is the premiere run of the show and presentations are now underway to about 2,000 local elementary school students. There will be only two public performance dates.

Chase Carney, a theater major at Truckee Meadows Community College is working the spotlight for this production.

“It was challenging keeping up with Kiba because he’s the bunny and he’s running around all over the place,” he said. “The tech part is an important job in the cast, so it’s great to be a part of the big family.”

The cast has rehearsed twice a week for three hours at a time since August.

Kiba Walker, fellow theater major, portrays the character of Poopsie the Bunny. He said it is hard work to dance the lively choreography for an hour and a half at a time in a heavy costume.

“It’s challenging dancing that much in this bunny suit plus singing the notes while in the full costume, which is really hot,” he said. “It’s fun to work with all the new people in the cast and find how they react off each other. It makes each performance different. Rick, Ted, Carolyn, Mig and Ty are awesome, a really great team.”

All cast members are students.

“I haven’t had much experience yet dancing and singing in a theater show before, so I didn’t know much about choreography, but Mig O’Hara is phenomenal and I learned so much from her and gained a lot of confidence,” said Jenny Carr, who plays Phyllis the Spastic Quail. “The kids in the audience; they’re just so into it, they eat it up and think we’re real animals.”

Under the moon, a rap number is vocalized by Bandit the Raccoon, who had made sure The Boy and the audience know for absolutely sure that she is nocturnal.

“Memorizing the rap was the challenging part, the tracks are already there and I have to keep the timing perfect,” said Jessica Towery, AKA Bandit.

She said that performing in musical theater has helped her develop more facets of critical thinking.

“When you’re on stage, you learn to act calmly when you need to multi-task, think out of the box and troubleshoot, moving really fast,” she said.

Other animals in the cast include the dog, love-ducks, turtle, and red-tailed hawk. Human characters beside The Boy are his parents, and a bully who sets a trap next to the tree one evening.

Matinee performances of the musical have been attended by classes of students in Washoe County School District (WCSD) since Nov. 15. After each show, the cast remains on stage and children have a chance to ask the actors and staff questions about rehearsals, costumes, dancing, props and other aspects of the performance.

“The Boy Who Spoke with Animals” is a show for all ages. For more information, please call the TMCC Visual and Performing Arts Department at 775-673-7291.