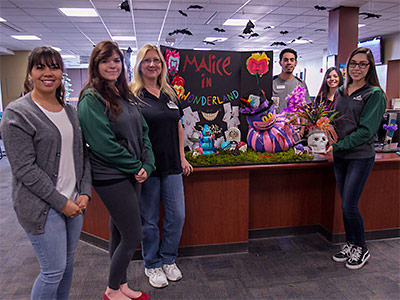 FLAMES mentors Caitlin, Paige, Sara and Karla receive their award for the contest, and credit their advisor with support and help. Victor and Samantha, fellow FLAMES members stand behind the desk.

Faculty advisors many times encourage and push forward their students to shine—watching the bright light from a few steps back, whispering once in a while, "you’ve got this."

This is especially true at Truckee Meadows Community College.

For example, student mentors in the Financial Literacy and Money Education by Students (FLAMES) decided to enter a staff and student competition that happens each year around Halloween.

Karla Ayala, Sara Pearson and Paige Richard won first place in TMCC’s 6th Annual Pumpkin Decorating Contest. Their entry, “Malice in Wonderland” topped 17 other entries and gathered the most votes from among the more than 300 student, faculty and staff votes cast on Oct. 26.

The teammates were asked whether a staff member assisted them, and at first, there was a short period of silence. But then, a stream of brisk responses instantly followed, listing specific tasks with which their advisor, Program Officer Shari Mathieson, helped them.

“We told Shari about the theme and she supported our idea and gave us the budget,” Pearson said. “She helped us buy the supplies.”

Richard immediately added that Mathieson helped her with the display’s moss, because it was sticking together and didn’t want to stay put.

“She suggested we start at the front where it shows the most and move backwards, and that worked,” she said.

Ayala agreed that Mathieson was a strong and resourceful shoulder to lean on.

“She really supported us by taking into consideration how important it was to us to get it done well and on time,” she said. “She worked with us on our FLAMES job duties to fit them around the project.”

Richard added that their advisor even helped them bring the large display down two floors to the V. James Eardley Student Center on contest day.

“She’s like our backbone,” Richard said. “We did get a lot of confidence from this project. It showed our artistic side, creativity, ability and how we worked together.”

“It was a really good team-building activity,” she said.

The dedicated pumpkin artists sometimes worked on the display beside the FLAMES desk where passersby could view the collaboration. They said that their fellow FLAMES teammates also kept encouraging them and offering praise that it was “looking good.”

When Richard initially found out about the contest, she told her teammates that she’d like to paint or decorate pumpkins. Pearson explored the idea with another staff member.

“Jen in Re-Entry had an idea for a title based on ‘Alice in Wonderland’ and we started to think about fun Halloween twists like Alice’s head cut off, the cat attacking the queen and cards being thrown at the pumpkin like they are slicing him, impaling him,” Pearson said. “With the art; that’s where Karla came in.”

“I’ve always liked the book ‘Alice in Wonderland,’” she said.

“Then I had to make it evil for the contest,” she added.

They made the “Malice in Wonderland” scene complete with bad characters eating Alice and the Queen of Hearts, making sure they included every creature from the original story. The Cat, caterpillar, teacup and Mad Hatter’s hat were all carefully built.

“A lot of my friends liked how the faces looked realistic,” Ayala said. “The colors of the cat and caterpillar were used for the flowers. The pansies filled the background. They were made out of tissue paper, construction paper and pipe cleaners.”

Richard explained that it took persistence to construct all of the flowers for the display.

“When Alice entered Wonderland, the pansies were the first things she saw,” she said. “When people at TMCC saw our board and how big it was—they could see how much effort we put into it."

Olga Katkova, Chair of Recognition and Activities Committee for TMCC Faculty Senate congratulated the winners and participants of the 6th Annual Pumpkin Decorating Contest. In addition to the FLAMES first place entry, the following prizes were announced:

Many other departments and offices also created contest entries:

Pictures of the contest may be viewed on the TMCC main Facebook page as a video slide show. And since Ayala, Pearson and Richard will be sophomores next year, they said they definitely plan on entering next year’s competition.

For more information about the Recognition and Activities Committee, please contact the TMCC Faculty Senate Office at 775-674-7912.