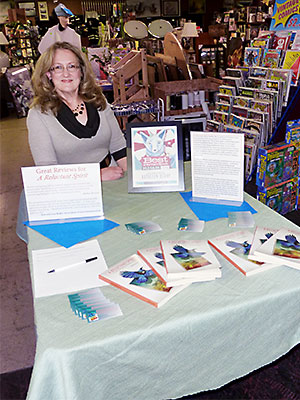 Kathy Berry, Marketing Manager, WDCE, at a signing for her book, "A Reluctant Spirit: A True Tale of God, Ghosts and a Skeptical Christian".

Part One in a Series

Just reading the titles of works by faculty and staff authors at Truckee Meadows Community College draws a person in to want to read their novels, short stories, poetry collections, articles and texts.

Jeff Griffin, TMCC English instructor, began exploring the back roads of the Mojave Desert in 2007 and found abandoned trailers and improvised shelters. The drawings, long letters, legal documents and journal entries that were left in the forgotten structures gave a detailed record of surprising expressiveness—of the occupants’ religious, economic or sexual feelings. His book, "Lost and" was published in 2013 and is available on Amazon.

"Lost and" is made up of unaltered reproductions from the found materials. At the core of the work is a collection of poems, mostly handwritten verses that recognize the dignity of the book’s collective group of anonymous authors.

Kathleen Berry, Marketing Manager, Workforce Development and Community Education, has written a true story entitled "A Reluctant Spirit: A True Tale of God, Ghosts and a Skeptical Christian", published in 2013, available on Amazon and at the TMCC Bookstore.

Berry is chosen as an impartial observer in an investigation by a TV news crew and paranormal experts of Nevada’s long-closed Goldfield Hotel.

She is at first skeptical, but discovers eerie activity on every floor of the shuttered old four-story hotel. The group’s psychic informs her that her "third eye" has been opened to hear and see spirits, and they do not resemble the ghosts in Hollywood movies. Berry shares insights into why there are no coincidences and ways intuition can be a trustworthy and useful tool.

"Berry’s intriguing debut memoir suggests that belief in the paranormal, including ghosts and psychic experiences, can be reconciled with orthodox Christianity...present-tense narration and convincing dialogue make for a gripping account," writes Kirkus Reviews.

John B. Reid, History, Political Science and Law Professor at TMCC, has written a textbook "Uncovering Nevada's Past: A Primary Source History of the Silver State". It is offered at University of Nevada Press and is co-edited by Ronald M. James, Adjunct Assistant Anthropology Professor at UNR.

Reid is also currently editor-in-chief of the Nevada Historical Society Quarterly, the only peer-reviewed journal focusing on Nevada history.

Henry Sosnowski, English Professor, has been a part of the Reno poetry scene for more than 20 years and is a founding member of the group Inversely Poetic. He has written a poetry book called "Love, Lust & Lunacy".

A review can be found on LeRuePress.com, and it can be purchased directly from the publisher 3 Leg Dog Press.

Ray Scow is an accomplished technical reviewer of automotive texts

It is the first book-length study of female military auxiliaries in the French Army, with emphasis on marriage, family life, business practices, origins, pensions and retirement, and combat activity, Cardoza said.

Cardoza also has completed literary book reviews on H-Net: Humanities and Social Sciences Online, tandfonline.com, and other publications, has been a contributing editor, and has written journal articles, including:

He has also completed a book, "A Boy Soldier in Napoleon's Army" to be out in 2016, and is working on a project about women soldiers for Oxford University Press to be published in 2017.

Lambert and Damien Ennis, Mathematics Professor, co-authored a journal article published in Performance Measurement and Metrics Vol. 14(2) in 2013. The work is "A Comparison of Academic Libraries: An Analysis Using a Self-Organizing Map". A self-organizing map is a type of algorithm—a set of steps the computer program uses to complete a task—to cluster complex data and represent it as a visual image. Similar data will end up at similar locations on the map, and relationships between data are then easier to visualize.

"This paper analyzes the relationship among measures of resource and service usage and other features of academic libraries in the U.S. and Canada through the use of a self‐organizing map," Ennis said. "This paper demonstrates how a self‐organizing map can be used in the analysis of large data sets to facilitate library comparisons."

Another article by Ennis about clustering data on self-organizing maps was posted in November by tandfonline.com.

Susan Henneberg, English instructor, has written books for teens including:

"I write books that give teens opportunities for thoughtful reflection, asks them to consider a variety of points of view, and challenges them to make informed decisions," Henneberg said.

Tamara Anderson, WebCollege Support Specialist, has written a 2015 children’s book, "Fuzzy Bunny". The book is available for order on Barnes and Noble and Amazon.com.

The central character of Anderson’s book learns how his extra-long ears are something unique, despite being teased by his peers. The book is positively reviewed by parents and teachers as a story that helps kids better understand differences and self-esteem. Reviewers also praise its illustrations by Gabrielle Bachand.

"As we all know, social media can be both a positive and negative experience," Anderson said. "Because we now have a great deal of cyber-bulling, and pressure to achieve physical perfection, I wrote Fuzzy Bunny as a gentle and positive way to introduce children to the concept of accepting our physical differences and viewing those differences in a constructive way. This book celebrates diversity and helps children understand that they are special and appreciated for their unique characteristics."

"’Sara Lost and Found’ is about two sisters, Anna and Sara, who find themselves caught up in the foster care system, and is told in first person from Sara's point of view," Castleman said. "It's a story of survival, sibling love, courage, and hope as the girls struggle to stay together in a world that tears them apart."

The book is listed on Simon and Schuster. Her other books include "Erosion (Perfection Learning)" and "Mommi Watta: Spirit of the River". Castleman will be a featured speaker at the TMCC Writers' Conference in April.

In Parts Two and Three