Students Encourage Each Other to Finish Degrees 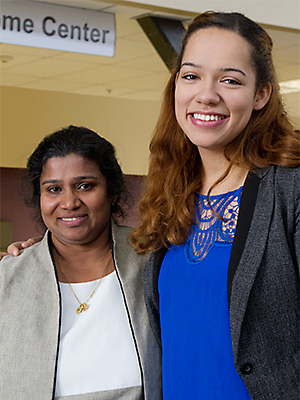 Truckee Meadows Community College students have brought a national movement to the local level and have encouraged fellow scholars to complete their courses, certificates and degrees.

“Completing on time is important,” said Cheril Gabbidon, Alpha Pi Gamma President and Student Government Association Vice President. “Some people with jobs and children need to go part-time, but we want to support students completing even if it takes a little longer. ‘Fifteen to Finish’ is the best way to do it – to finish your degree in two years.”

Gabbidon said that there are two major reasons to aim for a two-year completion time.

“It's important to meet with your academic adviser,” Gabbidon added. “It’s more than speed – it’s important to know what courses to take. You have to take the right prerequisites and only take the classes you need. That helps prevent running out of financial aid or borrowing more loan money than you have to.”

PTK representatives formed a committee and first met with TMCC’s president, Dr. Maria Sheehan. They were aware that student success was a focus of the College’s strategic plan. In addition to Gabbidon, the committee includes Kraig Mickey, Vice President of PTK and the Entrepreneurship Club (E-Club), and Jennifer Grove, PTK Alumna Director.

The committee then joined with TMCC Student Services representatives to continue the initiative. Faculty and staff volunteering in the effort are:

“I met with Dr. Sheehan, Vice President Gutierrez and Vice President Buchanan,” Gabbidon said. “I went to the Board of Regents meeting at UNR on Sept. 10 and to the TMCC President’s Advisory Council to speak about our initiative.”

The C4 committee of staff and students met to plan out a series of events to take place during October and November.

“The point of this drive is to support college completion, and to make students more aware of the student services we have at this campus,” she said. “Students don’t finish because they’re underfunded, overwhelmed and there are a lot of resources they might not know about that can really help them.”

The team created a pledge drive to create awareness and support for college completion. Members of the C4 committee gave class presentations to Educational, Career and Personal Development (EPY) classes.

They also attended the Tutoring and Learning Center Open House, staffing a table there to promote the pledge drive.

C4 members set up a booth in the V. James Eardley Student Center from Oct. 12-23. Academic Advisement and the Tutoring and Learning Center helped staff the booth collecting pledges from students and staff.

“Some instructors brought their entire class down to the Student Center to sign,” Gabbidon said. “Dr. Sheehan came down to say a few words. There was a big C4 banner that the deans, directors and students signed.”

Faculty, students and administrators completed pledge cards to encourage and support all students finishing their courses and programs. Students completing cards received a bracelet or button and were entered for a chance to win a free three-credit class at TMCC.

The total number of signatures was announced at a press conference on Nov. 17 – 274 students and 22 faculty members signed the pledges. A randomly selected student pledge card was chosen to win a free three-credit class.

In Gabbidon’s speech at the press conference, she noted two special mentors that have encouraged and inspired her; Blisin Hestiyas, Math Professor and Phil Smilanick, Accounting Professor.

She said that student pledge cards included college identification numbers, and the outcome of the pledge drive will be tracked for effectiveness of those completing their certificates and degrees.