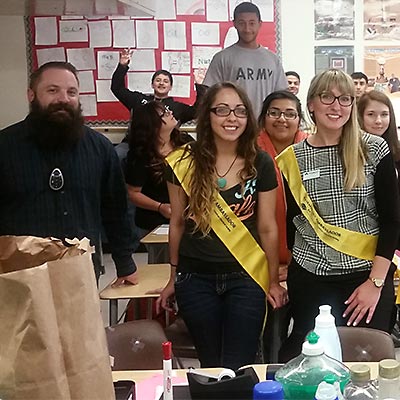 Olga Katkova, Chemistry Instructor at Truckee Meadows Community College, is enthusiastic to share her love of science with young people.

In addition to her teaching and committee responsibilities at TMCC, Katkova is a volunteer science coach active in the American Chemistry Society’s “Chemistry Ambassador” program. During the spring, she visited Wooster High School, presenting interesting chemistry demonstrations to about 250 students separated into groups for 50-minute sessions. This fall, her volunteer work is with about 55 students in two sections at the Honors Academy of Literature, a charter middle school for grades six-eight in Reno.

“I try to reach the students who aren't enrolled in advanced science programs at their schools, the ones for whom chemistry is new to them,” Katkova said. “I show them that chemistry is fun and is a part of everyday life.”

She hopes to inspire them in their educational goals. Before Katkova leads the chemistry experiments, she mentors the groups in how valuable their classes are to reaching life goals.

“I would like to convey that nothing is impossible, that education is so important to be able to follow their dreams,” she said. “Part of what I teach is that it’s OK if a student doesn’t know where they want to be in the future, and to just continue in their education. Unfair things happen in life. I let them know that they have a choice to be a victim or a victor when unfair events like sickness or other troubles occur.”

Hands-on activities excite the students about chemistry. One favorite experiment that Katkova leads is the “Density Tower.” Students discover what density is, and learn the density of common everyday items by submerging them in water. The students are animated to find that an egg will float in water if you add salt to the water, and that an orange will float only if you leave the peel on, because the peel contains trapped air. Their eyes are wide to see that a Coke can will sink, but a can of Diet Coke will float.

The American Chemistry Society (ACS) is a nonprofit organization that is known internationally. It sponsors the Ambassador program and also donates $500 in lab fees to the schools for the semester. The Science Coach volunteer instructor can use these lab fees toward the materials used in their presentations and donate the remainder to the school.

Katkova and a representative from the school apply to the Chemistry Ambassador program, and the ACS then lets them know if they have been accepted. In working with local schools, she also serves as an ambassador for TMCC.

“I’d like the young students to know they have a friend at TMCC,” she said. “I let them know that TMCC is a welcoming place. There is also the opportunity of TMCC High School, where students can receive both a diploma and two-year degree very economically, almost at no cost.”

Bill Doherty, Computer Technologies Professor at TMCC has been volunteering at the Tahoe Rim Trail Association (TRTA) for more than seven years.

He says that he enjoys spending time with young trail builders – that they give him inspiration for a bright future.

“I enjoy working with a very diverse group of volunteers, but one group of teens and young adults were my favorite,” Doherty said. “This group was part of a leadership program in the Bay area, and their desire to learn, their work ethic and their enthusiasm for protecting the environment gave hope that our future is in good hands with our next generation of leaders.

“Bill Doherty is a team player – he has been working closely with us to develop curriculum that is relevant and prepares students for getting that important first job after graduation from TMCC,” Bouweraerts said.

TMCC student Spencer Schultz is a force of good nature, according to his fellow Student Government Association members.

“Spencer does the most volunteer work I’ve ever seen,” said Frankie Talbot. “He has three jobs, takes a full load of classes and does volunteer work too.”

One of Schultz’s three jobs is fulfilling the responsibilities of Student Government Association (SGA) President at TMCC this academic year. SGA Vice President, Cheril Gabbidon said that she respects him tremendously. She added that Schultz doesn’t just volunteer at one organization, but two – Reno Tahoe Rescue Society and We Care Volunteers.

Reno Tahoe Rescue Society is a nonprofit group serving Northern Nevada, helping place small dogs and exotic animals into caring homes. We Care Volunteers provides home-cooked meals and warm clothing to homeless and underserved populations in the community. The group partners with schools, church groups and other agencies to help people in need.

As part of his work with Reno Tahoe Rescue Society, Schultz often fosters animals in his own home, Talbot said. Once, Schultz offered to help Talbot with an oil change, and he said it was clear that Schultz gives a great temporary home to the animals in his care.

All this and he writes for the student newspaper, The Echo, and actively participates in two student clubs, the International Club (I-Club) and Phi Theta Kappa (PTK). A qualification to be a member of PTK is to maintain a cumulative GPA of 3.25 or above.

“Yes, Spencer is a smarty-pants,” Talbot said with a grin about his mighty and intelligent friend.

For more information about the many positive contributions of TMCC staff and students to their school and community, please contact the Marketing and Communications Department at 775-673-7087.