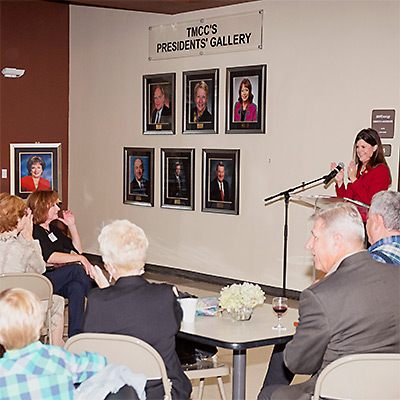 Gretchen Alt Sawyer, Executive Director of TMCC Foundation, speaks at the reception for the Presidents Gallery on Oct. 28.

A newly updated Presidents Gallery of portraits showing all of the College’s presidents can now be viewed in the V. James Eardley Student Center, a facility named after the first president of Truckee Meadows Community College.

New portraits, including interim presidents, have been added to the gallery and unveiled on Oct. 28, making the photographs a complete collection of all who have ever led TMCC.

The Presidents Gallery is open to the public according to the Red Mountain Building’s hours, and is located on the second floor, adjacent to room 256.

V. James Eardley served as lead administrator from 1979-1986. He was a veteran of the U.S. Navy, attended Utah State University, and played semi-professional baseball before becoming a teacher and baseball coach at Carlin High School in Elko County. He taught for more than 10 years in public schools, including Reno High School. Eardley also earned his master’s degree at the University of Nevada, Reno. He became Dean of Community Services for the Nevada Community College Division, and later Executive Dean and Executive Vice President.

When TMCC formed as a split from Western Nevada Community College in 1979, Eardley was named President. Pat Slavin, Associate Dean Emeritus, was there at the beginning, working alongside Eardley.

“We were just trying to figure it out as we went along and move it forward, and we were able to do that because Jim instilled such a strong sense in us of the fact that we were involved in something really important,” Slavin says in a video posted on TMCC’s Library Archives. “That theme that he created early on, where everybody was going to be taken care of continues on to today. If there’s anything that’s his legacy, it’s that he cared about his students and about staff and was willing to do anything to take care of them.”

New to the Gallery

Huneycutt was raised in Kentucky and lived in Arizona before completing her bachelor’s degree at UNR in 1972. She earned her master’s degree at UNR in 1976 and an Ed.D. from the University of San Francisco in 1991. She taught at Reed and Reno High Schools and joined the staff of TMCC as a business faculty member. In addition to serving twice as Interim President, she also held the position of Senior Vice President.

“Rita was a cheerleader for other women and their successes when local women were just breaking into leadership roles,” according to a legacy article in the Reno Gazette-Journal. “She demonstrated that leadership in higher education could be different by becoming the region’s first female community college president. She encouraged all who worked around her to advance the cause of education for all.”

Huneycutt received a Woman of Achievement award from the Nevada Women’s Fund.

“She was always a strong advocate for education and enjoyed participating in organizations that provided mentoring and scholarships to young women in particular,” according to the RGJ article.

“With Delores as VP of Finance and Administration, TMCC was able to excel at achieving its academic mission,” said Chris Winslow, former Executive Director of Information Technology. “Delores expertly navigated TMCC through its seasons of largest student and building growth, balancing student and academic needs with a firm control over administrative and infrastructure costs.”

Sanford oversaw the opening of the first Redfield campus and the Applied Technology Center site, built up financial reserves which primarily sustained the college during years of budget cuts, and provided the human and financing resources necessary to implement the iNtegrate (IT) student system, Winslow added.

She held the position of Vice President for Finance and Administrative Services before and after she led the College as Interim President, and retired in 2011.

John Gwaltney, Ph.D. taught economics and was president of colleges in Illinois and Kansas before coming to TMCC in 1986. He spoke at the Presidents’ Gallery unveiling reception, noting the strong bonds formed by TMCC’s founding staff, and how he remembered Rita Huneycutt as the go-to person when no one else could find a small bit of needed information.

Kenneth E. Wright, Ph.D. served for two years, and with a background in engineering and technology, worked to obtain new members to the Community Advisory Board such as the Nevada Manufacturers Association. He began an Electronic Career Center to assist students with career exploration and resume building. The fund for staff development training was considerably increased.

John A. Richardson, PhD, TMCC President from 1997-2001, had previously served as Interim Chancellor of the Nevada System of Higher Education in 1993-1994. During the 1996-1997 academic year, TMCC increased its enrollment after a two-year decline. Richardson worked to strengthen college-wide strategic planning and student assessment. He formed the institutional effectiveness committee and the planning and policy council to create a better environment for shared governance.

“He led with a steady hand and with expert knowledge of higher education,” said Daniel Bouweraerts, Chair of Visual and Performing Arts.

Philip Ringle, PhD was TMCC’s next president. He graduated from Kent State University with a Bachelor’s of Science in Education, Master of Education in Counseling and doctorate in Higher Education Administration.

Before coming to Nevada, Ringle was Vice President for Institutional Advancement at the Community College of Philadelphia. With experience in institutional advancement and professional development, he understood how expanding departments and hiring key staff leads would fulfill his vision for growing the College, TMCC staff members said.

Dr. Sheehan became the College’s leader in 2008 and has brought TMCC through one of the deepest recessions in U.S. history, including the state budget reformulation starting in fiscal year 2014. (Coming soon will be an article featuring President Sheehan and her many contributions to TMCC, in the community, and to global charitable causes.)

For more information about the TMCC Presidents Gallery, please call the TMCC Foundation at 775-674-7648. Additional historical information can be found on TMCC’s Library Archives.