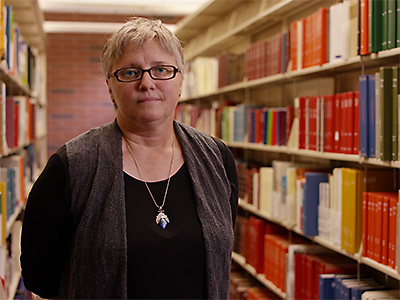 Ana Douglass, Ph.D., English Professor and 2015 Carnegie Foundation for the Advancement of Teaching Nevada Professor of the Year.

Ana Douglass, PhD, English Professor at Truckee Meadows Community College, has been chosen as the 2015 Carnegie Foundation for the Advancement of Teaching Nevada Professor of the Year.

The Council for Advancement and Support of Education (CASE) announced state and national awards on Nov. 19 during a celebratory event at the Ronald Reagan Building and International Trade Center in Washington, D.C.

Winners of the U.S. Professors of the Year were congratulated by congressional representatives on Capitol Hill and at a formal reception at the Folger Shakespeare Library later in the day.

Professor Douglass is the most recent Nevada state awardee since a University of Nevada, Las Vegas associate professor was honored in 2012. Also, Douglass is the first faculty member from a Nevada community college to have ever won the state award, according to usprofessorsoftheyear.org.

In addition to her post on the English faculty at TMCC for close to 19 years, she has also served in positions as Faculty Assistant to the President, Coordinator for Developmental English and Coordinator of the Writing Center. Douglass has instructed English in an intensive summer program and has taught the subject of teaching writing at the University of Nevada, Reno. She holds a PhD from Rutgers University and a Bachelor of Arts in Comparative Literature from the University of California, Santa Cruz.

“This is a huge honor for me,” Douglass said. “We have so many wonderful faculty members here at TMCC. Faculty at a community college have to be so dedicated – our students fight really hard to be in the classroom. You feel an obligation beyond just teaching them – you want to know them, to know each of their stories.”

Armida Fruzzetti, Dean of Liberal Arts, and Jane Nichols, PhD, at the time Vice President of Academic Affairs, nominated Douglass for the Nevada Professor of the Year award. Professor Douglass then submitted the required documents; a philosophy statement, teaching log of her pedagogical methods and uniqueness of instruction, two letters from colleagues and two letters from students.

One of her students is Victor Hugo Mercado. An alumnus of TMCC, he has recently completed his law degree at Lewis & Clark University in Portland, Ore. Mercado wrote a long and heartfelt letter in support of Douglass’ teaching and mentorship.

“I was a 19-year-old Mexican-American student from a small rural Nevada mining town, the son of poor Mexican immigrants,” he writes. “I had barely graduated from high school a year before. I worked full-time doing heavy labor in a warehouse on the outskirts of Reno at night and was going to community college full-time during the day. Most of my teachers in my small town had conditioned me to believe that I was destined for mediocrity … I knew my path.”

He continues his letter noting that this professor changed the course of his life.

“I found in Professor Douglass a mentor and teacher that advocated, challenged and believed in me in a way no other teacher in my life ever had,” he writes. “Professor Douglass was always there, going far beyond her job to remind me of what I could achieve. … Professor Douglass saw possibility in me that I did not see in myself and she always kept me looking forward, not backward. The greatest gifts that Ana Douglass gave to me were faith in me as a student, and instilling in me the value of intellectual curiosity. I carry these with me to this very day.”

Noelle Staggers, who graduated from TMCC in 2015 with an English major, agrees.

“She also has one of the most empathetic and approachable demeanors I have ever come into contact with, making herself available to everyone whether it is during school hours or not,” Staggers wrote. “Her reviews of the essays you submit is thorough and thoughtful making it more than apparent she carefully reads and immerses herself in the work her students turn in. There is little else one can ask for when describing the ultimately engaged and supportive college professor.”

Staggers added that Douglass helped develop her sense of place in the world and the ability to be successful in college and life.

“She introduced these subjects (literary theory, criticism) in a way that lacked intimidation, and allowed me to feel like I had a place in the larger conversations in history,” she wrote. “I now feel like I have the right to have a voice in literary discussions, and that my opinion has significance because I can assemble my view in a way that makes people listen, even the most educated and influential experts. To this day I am often complimented by my other professors on my ability to put together a coherent and meaningful thesis and argument; I have Professor Douglass to thank for that.”

The professor firmly believes that if a student is disciplined and develops their curiosity, they can learn just about anything and do a great job in their chosen career.

“I try to impress upon them how much control they have over their own education, and to demand a good education, taking ownership of their learning,” Douglass said. “I give them challenging tasks and projects, because they inevitably rise to the occasion.”

Douglass credits her own mentors at the University of California, Santa Cruz with helping her development as an educator. Thomas Vogler and Mary-Kay Gamel are now retired, but they still continue to be there for support and mentorship.

“I had two great professors at U.C. Santa Cruz who became my mentors,” she said. “They taught me about how to teach beyond the classroom and to pay it forward. That’s the mentor part.”

Vogler and Douglass also co-edited a book, published by Routledge in 2003, “Witness and Memory: The Discourse of Trauma.” The book is a collection of writings about violence and witness studies, including topics such as the O.J. Simpson trial, issues in feminism, and survivor experiences.

Pedagogy and The Lifeboat

Douglass is a fourth generation Nevadan and returned to the state to teach after completing four years at Rutgers University teaching composition, women’s studies and modernist literature. She found the multi-tiered developmental English instruction in Nevada had fallen behind more intensive critical thinking methods employed in other states. These approaches engaged students and advanced college-level thinking and ideas.

“I was instrumental in overseeing the shift to this curricular approach, and I was very much a part of a campaign at the time to rethink who our developmental students were or should be and how we should be teaching them,” Douglass wrote.

Another remarkable project that Douglass has pioneered in the past three semesters is called “The Lifeboat.”

This project gives students who are not passing English 102 at mid-term a chance to “re-launch” by taking an online version of the class during the last eight weeks of the semester. Her objective is to help students complete the course without having to pay a second time, and to find out more about why students have difficulty and the strategies which help them to be most successful in completing coursework. She said that her project has been seen as controversial because the “real world” does not always provide second chances or safety nets.

“I believe, however, that my students’ ‘real world’ puts pressures on them that exceed anything that I can possibly understand, so I am choosing to move away from the typical value laden response to their poor performance,” she said. “I believe a philosophy of teaching practiced in the absence of context is a philosophy doomed to failure, and I am convinced that the prevailing paradigm for education is no longer sustainable when the social contexts of our students’ lives have shifted so dramatically.”

To date, 37 students have selected the Lifeboat section to complete English 102.

She was named Teacher of the Year 2014-2015 at TMCC, and earned the Service to the College Award for the 2005-2006 school year. Douglass has been a co-recipient of the Eisenhower Grant, Nevada, and developed a course for the College of Education at UNR to teach current and future high school writing teachers.

“For me, this Nevada teaching award is not about my PhD or my book, it’s about who I am in the classroom – that’s why it means so much to me,” Douglass said.