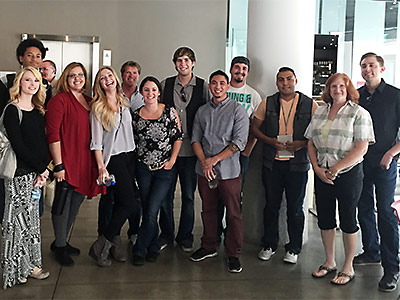 TMCC architecture students attend the Design is Innovation, Creativity & Energy Conference in September at the Nevada Museum of Art in Reno.

This year’s D.I.C.E. Conference was held at the Nevada Museum of Art (NMA) on Sept. 24. Each team’s challenge was to design a creative solution for the ReTRAC lids that cover Reno’s train tracks. Entrants were given the theme of “play” to use in developing their concept.

The TMCC team won in a field of 11 entries – eight TMCC student teams and three professional architect entries. Student teams were two-three members each. For this contest, presentation of the design idea was as important as the concept itself.

“Instead of telling people our idea was great, it was really important for us to show them something fun and playful; and let them see how great the idea was for themselves,” Clark said.

“Our concept involved mountains, rivers and trees, because you play a lot in the surrounding Sierras,” Stewart said. “And the stop-action animation added playfulness to our video presentation. More than 475 pictures were used in the video, but we took even more for testing.”

Clark, Evans and Stewart’s presentation was entitled “Biggest Little Sierra Park.” It is posted by the students on YouTube and on the DICE Reno Community Facebook page.

For the two and a half weeks immediately before the deadline, there were long hours of hard work on the project, including one 9 a.m.-7 p.m. day in a single room doing much of the videotaping. But Stewart added that it was all fun.

“Our video was one of the most energetic, the way we tried to incorporate our surrounding environment,” she said. “You can actually see the mountains from the site. And we realized at one point, ‘our project is the Sierras’ on Sierra Street."

A ReTRAC lid is a large concrete platform covering the train track tunnels in downtown Reno. The two that Stewart’s team focused on are close to the Reno Arch. In coming up with their concept, one priority was to find ways people could enjoy a mostly unused open area.

“We wanted a community space that could be used every other day besides just Hot August Nights,” Stewart said. “It could be a place to hang out and gather. Something more inviting than a blank space that now is just the lid.”

First, the team met to brainstorm concepts for their design.

“We came up with an idea that we all could agree on,” she said. “The tree is a steel beam sculpture with perforated leaves to shade you. Two giant bench swings hang from the tree – two or three people can fit on each swing.”

After completing the main concept and construction ideas, the team worked on drawing them out to scale. They drew a shadow screen park to be constructed with translucent Plexiglas and steel. At night, the shadow screen can turn into a shadow theater for people to watch the shapes created by their movements. The Sierra Juniper tree is a 30-foot-tall steel structure. Areas of playground rubber flooring material are built beside the water feature that runs the length of both lid areas.

“We created a three-minute video,” Stewart said. “It had to be intriguing to people. It turned out to be more interesting and more energetic with movement and details, much more than a PowerPoint.”

Stewart worked on photography and video editing in Windows Movie Maker, a free software. Clark was in charge of creative directing for their project. She also contributed photography and drew all of the illustrations. Evans helped in planning, prepped materials, worked on construction, and assisted with filming.

A majority of TMCC architecture students attended the conference at NMA – each team had one or two representatives taking part.

“D.I.C.E. ’15 brings together creatives, artists, and designers for a series of talks by speakers whose work explores ideas about play in design, including award-winning public artist Roman de Salvo, design thinker and Pinterest Brand Design Manager Everett Katigbak, and landscape architect Kevin Conger,” according to the NMA website.

The 11 videos were shown during the conference and everyone in attendance voted for their choice of best entry. The winner was announced at the end of the event.

There wasn’t a cash prize, but Stewart says that the bragging rights are awesome.

“It will really help when networking, and filling out application essays for transferring to architecture schools,” she said.

For more information about the Architecture and Design Technology program at TMCC, please call 775-856-5300, or email Kreg Mebust, Architecture Instructor.