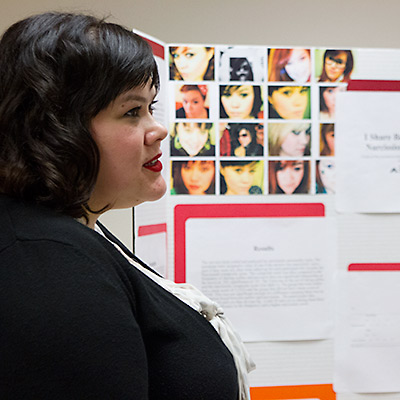 Sarah Penner researched self-confidence in her study, "I share because I care: Narcissism and selfies" for the capstone Psychology 275 course during Spring 2015.

At an October meeting of the Psychology Club (PSYC), officers and about 20 members brainstormed a coming movie event, and engaged with a guest presentation on the topic of clinical career pathways.

Juli Anne Baines is a local marriage and family therapist intern who spoke to the club about different career choices as a psychologist, marriage and family therapist (MFT) or licensed clinical social worker (LCSW). She also covered types of internships and degrees available, state exam requirements, career trends, licenses, and what a typical day is like for an intern.

Club members asked many interested questions at the conclusion of the talk, and PSYC officers expressed enthusiasm about the presentation and their club’s growth.

Officers of PSYC are James Wolfe II, President; Madison Deming, Vice President; Sarah Botts, Secretary; and Allyssa Robidoux, Treasurer. At the beginning of the semester, they took turns stopping by Psychology 101 classes to spend a few minutes with new students and talk about how the club accepts and appreciates new members.

“You don’t have to be a psychology major to join the club – everyone is welcome,” said Wolfe.

Students need to be enrolled in at least one credit at TMCC to join the organization, and membership is free.

When the club began last year with three members, they decided to try and build it up, said Haley Orthel-Clark, Psychology Instructor and the club’s advisor. The classroom visits were successful and membership now numbers 34. Officers also participated in the Student Government Association Club Fair on Sept. 1 in TMCC’s plaza.

PSYC’s movie event is a showing of “The Stanford Prison Experiment". It is open to all college students in the community – from TMCC, the University of Nevada, Reno or to those enrolled in online programs.

The film will be followed by discussion and refreshments. To be released in November, the movie is groundbreaking because it examines current laws and practice standards that have resulted from what is now considered to be unethical research methods, Wolfe said. The discussion will be led by Orthel-Clark.

“In 1971, the Stanford University Psychology Department created a simulated jail using students as prisoners and guards,” according to the movie’s official trailer. “The results shocked the world.”

In the movie, Stanford students are chosen during an experiment to act as either prisoners or guards. They adapted to the simulated prison so realistically, that the research spiraled out of control into violence. This film won two major awards at the 2015 Sundance Film Festival, and is reviewed by the New York Times as “stark and riveting.”

Club Meetings Are Held Each Month

The club meets the first Wednesday of every month, from 3-4 p.m. in Red Mountain Building, room 307. New members can join at any time.