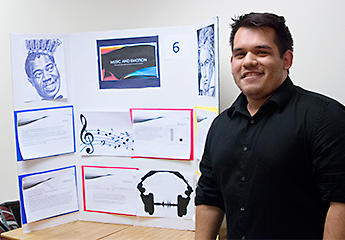 Jonathan Luna was curious about what types of emotions would be drawn out by different types of music; his study participants listened to jazz and classical excerpts.

Guests, faculty reviewers and student judges observed the presentations in Sierra Building, room 204, and posed questions to the 11 student social scientists at their poster stations throughout the room. Student researchers are working toward the Associate of Arts degree, Psychology Emphasis. In this final course of the four major emphases classes, they learn how to develop a testable hypothesis, design a study, collect and analyze data and summarize their findings.

“The students ensure that their study methods align with IRB guidelines by submitting a subject recruitment proposal to their instructor as well as the Liberal Arts Dean, Dr. Armida Fruzetti,” said Haley Orthel-Clark, TMCC Psychology instructor.

At the beginning of the semester, students collectively decided to conduct individual projects instead of a group experiment. Orthel-Clark said this strategy worked well for the group.

“They commented and collaborated on refining each other’s processes and helped class colleagues evolve their projects,” she said. “Students used each other for pilot projects to further refine the work before conducting the actual research.”

In one of the approved projects, Donna West studied the correlation between the amount of reality television that participants watched, to the amount of empathy they felt toward the characters in clips from a show. Study participants were surveyed about the amount of reality television they watch during a typical week. They also watched video excerpts from “Jackass,” “Dance Moms” and “Toddlers & Tiaras,” and were asked if they enjoyed the show, thought it was funny, were saddened by it, and whether they felt empathy for the actors or contestants.

The results were definitive.

“The more reality television you watch, the less your empathy score, on average,” West said. “They’ve been desensitized by watching dramatic fighting, alcohol consumption, and other behaviors. You can see broken hearts almost every day on U.S. television now.”

Corinne Thompson found less statistical significance in her study of the influence of race on decisions of guilt or innocence when participants acted in the role of a jury member.

Her 60 participants read a one-page story about a crime, which contained no descriptive words about physical evidence presented in a case, and with no references to ethnicity. Twenty were shown a picture of a white male; 20 saw an image of a black male; and the control group did not view a picture. The caucasian and Hispanic participants in the group who saw the black male showed a slightly greater bias that the verdict should be guilty, but not enough so to be statistically significant.

“They were also less sure, or confident about their vote, but still voted that way,” Thompson said.

Sarah Penner decided to research self-confidence in her study, "I share because I care: Narcissism and selfies". She also found patterns, but not a clear association.

“People didn’t share their images enough days a week to get a definite correlation, but 35 out of 47 people surveyed did take selfies, so this shows it’s an important part of life now,” Penner said.

Korrin Skaggs was interested in the question of whether sleeping patterns affected motivation in all areas of life. Based on tabulated written surveys, she found that students who nap more show decreased motivation for school and other pursuits; less need for achievement.

“They are probably not getting good quality of sleep at night or stay up too late,” Skaggs said.

She found that she enjoyed the research process and liked stretching out of her usually shyer comfort zone by asking people important questions. Her classmate, Sarah Leo, also felt that conducting a study was rewarding.

“This is my favorite day,” Leo said. “It’s exciting to present my results because I was able to find a statistically significant relationship in my study.”

In Leo’s comparison of perceived anxiety to physiological symptoms, she asked 40 respondents whether they experienced sweaty hands, gastrointestinal symptoms, reluctance to leave home, and reluctance to engage when they felt anxiety from difficulties in relationships. Leo found there was a positive correlation between stress in romantic, platonic friendship or family relationships with physiological problems.

Tyler Crill was also interested in stress and anxiety. His question was whether people who exercise or are more physically fit have a higher tolerance for stress. Crill’s results were inconclusive, but he did find a moderate correlation between enjoyment of exercise and how often people exercise. There also was a moderate correlation between people who are stressed at either work, home or school with anxiety also felt in one of the other two arenas.

Carlos Gomez also looked into physical fitness, but in relation to self-esteem. His hypothesis was that more physical activity would link to higher self-esteem. Gomez used the Rosenberg Self-Esteem Scale to rate written surveys of study participants. He found no significant correlation in the full study cohort, but did find that the connection between higher self-esteem scores associated with greater physical activity gets stronger as people get older.

Aisha Franklin wanted to study a different relationship – the one between memory and music. Her research question was whether studying while listening to music could help a person retain more information about a short or long poem. She found a statistically significant result between classical music and recall.

“People that studied listening to Ludwig van Beethoven’s 'Moonlight Sonata' scored higher on a test about the poem, as opposed to the group who studied in silence,” Franklin said. “Music helps them keep focused, motivated and relaxed.”

Jonathan Luna was also interested in music, but curious about what types of emotions would be elicited by different genres. His participants listened to similarly paced examples of jazz and classical music: Louis Armstrong’s "La Vie En Rose" and Beethoven’s "Piano Sonata #9".

“Most picked sadness for jazz music, and for classical, it was anger and fear,” Luna said. “It might be because more movies, media, use a classical type of music to build up tension to a jump scare.”

Olivia Morrow knew from previous psychological research, such as Diana Baumrind’s 1966 study, that the authoritative parenting style was best for producing the desire for achievement in children. She wanted to see whether students at TMCC showed a positive correlation between this parenting style and the need to excel, as opposed to the three other styles of raising kids; authoritarian, uninvolved and permissive.

“There were no statistically significant results, perhaps because the participants were college students and therefore all were already higher achieving,” Morrow said.

While Morrow sought participants from her college peers, Jeremy Landis polled colleagues at his workplace, employing a 13-question survey about faith and happiness.

“There was a strong significance between faith and how often you attended church with the incidence of happiness,” he said. “Coming out of it, I think other things factor into it. Many people answered that there was a balance of family, friends, money, power, love and other things that contributed to their happiness.”

For more information about the Psychology Program at TMCC, please contact the Social Sciences Department at 775-673-7185.