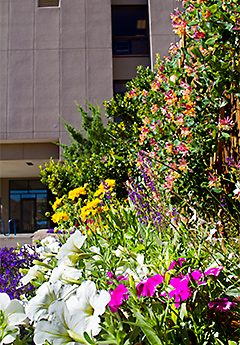 One of the gardens on campus at Truckee Meadows Community College during Summer Session.

Visitors to Truckee Meadows Community College can charge their electric vehicle, glimpse swallowtail butterflies alight on honeysuckle in a garden free of chemical insecticides, and check out online dashboards showing how much power is generated by solar arrays throughout each day.

“In the last ten years we have reduced our grid-based energy consumption by 20 percent, started a recycling program and practically eliminated use of chemical insecticides on campus grounds,” Roberts said.

He said that chemical insecticides are not sprayed on landscaping anymore at TMCC, but occasionally organic products are used to control insects.

“We have even released ladybugs to control aphids,” Roberts said.

Rachel Solemsaas, Vice President of Finance and Administrative Services, said that in addition to becoming free of chemical insecticides, the College is committed to reducing its carbon footprint. She said that TMCC has been one of the first colleges in Nevada to participate in a NV Energy study comparing TMCC’s energy usage to other buildings nationally.

The energy benchmarking report provided to TMCC by NV Energy states that the College is using less energy than other institutions in the same climate conditions, and has improved energy performance from November 2009-October 2014. The report lists three main measurement categories: energy use, energy cost and energy cost per occupant.

The study compared overall energy usage from 2013-14 for 53 colleges and universities in similar climates, and rated TMCC at number 10, lower in energy usage than 43 other institutions.

Also, the report states that TMCC has reduced energy usage in all seven buildings from 2009-2014. Buildings in the sample include Dandini Campus, Redfield Performing Arts Center, Meadowood Center, Applied Technologies Center, TMCC Police Storage, Facilities Storage and a property adjacent to the Meadowood Center at 5250 Neil Rd. which is leased to other businesses.

“Given our budget deficits, energy conservation provides savings in our operating costs,” Solemsaas said. “In fact, the College has begun to reduce energy use by automatically shutting down computers at night.”

“We are testing a variety of high efficiency parking lot lights at Meadowood and on Dandini,” Roberts wrote. “We start by retrofitting one or two lights and measuring the amount of light it puts out (lumens) at night at ground level. We will also see how the various test lamps handle the summer heat. If we determine that one of the lights performs well, we will likely retrofit Meadowood parking and exterior lights next year. We would then observe Meadowood for a period and determine if we want to retrofit the larger areas on Dandini.”

TMCC replaces or retrofits appliances, HVAC systems and lighting when they need replacement.

“We always look for energy-efficient replacements to replace equipment that wears out,” Solemsaas said. “We use more energy-efficient bulbs. We purchase equipment like charging stations with grant funds and solar panels with rebates from NV Energy. This is to save costs to the College.”

Due to generous rebates from NV Energy, TMCC installed solar panels in 2012 and 2013 on the rooftops of the Vista and Sierra Buildings at no cost to the College. The arrays can be tracked on the Web for the amount of energy they produce. Online dashboards for solar arrays may also be viewed for the panels installed in 2009 at Applied Technology Center and in 2014 at Meadowood Center.

“TMCC would look into more installations if we could have more cost-neutral solar panel projects," Solemsaas said. "Unfortunately, those rebates are slowly diminishing.”

There Is More to a Sustainable Campus Than Ecological Conservation Alone

“We’ve made some significant progress due to our energy-saving and sustainable business practices,” Solemsaas said. “Sustainability is really a systematic commitment beyond just the ecological and environmental aspects; another component is our business decisions in supporting economic wellness and social justice." Solemsaas said.

“Facilities and Information Technology are the ecological aspects, and Finance is all about the economics and social justice of a sustainable campus,” she said. “Leadership and sustainable fiscal policies sustain our community and provide for education and upward mobility of citizens.”

Commuting and Recycling Are Efforts Taken by the TMCC Community

Solemsaas said that public transportation can play a big role in making a campus more ecologically friendly. She bikes to work, and won a Commuter Challenge award, along with Cheryl Olson, during the annual Bike to Work week.

“Commuting has a huge carbon footprint – any vehicle other than a single occupant vehicle will reduce our carbon footprint,’ Solemsaas said. “We have a generous bike lane and challenging tracks and hills for a good workout. We have a shower room with lockers available near the Fitness Center, and the showers are free during campus hours.”

Students and staff are participating toward a greener campus.

“There are so many different ways that the TMCC community helps to make campus more green – by recycling paper, glass and plastic, conserving water, conserving energy by turning off computers, reducing printing, and commuting by car pool, bus or bike,” she said.