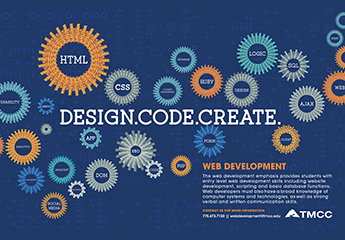 “As a club we find so much value in our relationship with TMCC and will continue to build on that foundation,” wrote Linda Ramos, ADDY judging chair in an email.

AAF promotes the well-being of advertising, hosts expert speaker workshops, networking opportunities for professionals, and provides scholarships for students. There were 44 student entries in the local ADDY competition from students at TMCC and the University of Nevada, Reno, said Dan Bouweraerts, Chair of Visual and Performing Arts.

Two TMCC students, Faith Lorenz and Vy Tat, are now progressing to higher levels of the AAF competition. Judging took place in Washington, D.C. from Apr. 30-May 2, and winners will be announced at the National Conference to be held in Las Vegas on June 11-13 at Caesars Palace Las Vegas Hotel & Casino. The National American Advertising Awards show and ceremony is on Saturday, June 13.

Lorenz graduated from TMCC in 2013 and returned to take the advanced typography course, GRC 244. One of the class assignments was to design a poster advertising an academic department at the college. The poster won gold at AAF Reno and a silver award at the regional contest – a regional silver qualifies the work for entry into the national competition.

“I chose a department that I didn’t know really well, that I could find out more about and do a lot of research – so I picked Chemistry,” she said. “I came up with the tagline, ‘It’s all about the chemistry,’ taking my inspiration from it and wanted to encourage students to find their future self, a connection with and passion for their career.”

“We designed a minimalistic and an expressive poster for a program at TMCC; I chose Web Development because I am a big fan of the web,” Tat said. “I came up with the idea for both of these posters when I was sitting in my web development class. Looking around the class, I noticed that I was one of the two girls in the class, and it gave me the idea to design a poster that would target female audiences, and to have them notice the web development program.”

Tat’s minimalistic-themed poster won a local gold and a silver regional award. The expressive poster received gold at AAF Reno and at regionals.

Winning regional ADDY awards may help the designers in their careers

Lorenz said that the award has given her inspiration, reinforcing she has made the right choice to pursue graphic design.

“This helps me on my career path and has boosted my confidence,” Lorenz said. “It has been an unexpected good experience and given me 'chemistry' with my own career.”

Her instructor agrees that the ADDYs look great on professional job applications.

“From a career standpoint, this is an excellent addition to their resume, which will give them better opportunities in finding professional employment,” Bouweraerts said.

Tat says that the recognition has enhanced her self-assurance.

“I feel like winning the regional awards does gives me the confidence I need to continue on with my design work,” she said. “It also makes me appreciate and be thankful for the graphic communications department. We had many critiques and inputs from the class and made many revisions before I came up with these final versions of the posters.”

Lorenz praises her student colleagues at TMCC and her instructor.

“I have a lot of respect for Dan Bouweraerts,” she said. “He’s done a lot for the students. His passion for design has become my passion, not only for me, but for the other students, and I really want to thank him.”

“Winning regional and national awards shows that TMCC Graphic Communications students can compete with the best of the best across the United States,” Bouweraerts said.