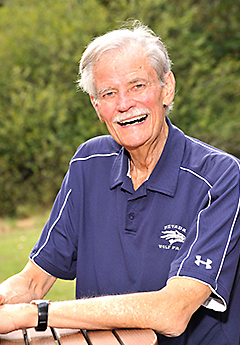 Hal Plummer, one of the biggest fans of Truckee Meadows Community College, who built up the TMCC Foundation to become a large and efficient scholarship-raising organization, has passed away on March 2.

“Much of what TMCC is today comes from the support and promoting spirit of Hal Plummer and Phil Rose,” said John Gwaltney, PhD, President of TMCC from 1986-1994.

For the 2015-2016 academic year, students have applied for more than 300 TMCC Foundation scholarships. Scholarships are based on many factors: scholastic merit, college and community service, financial need and major field of study. There are numerous awards for which to qualify, including many general scholarships open to all students.

A list of scholarships can be found on the TMCC AcademicWorks page.

Hal Plummer came to serve on the TMCC Foundation at the request of Dr. Gwaltney

Dr. Gwaltney taught economics and was president of colleges in Illinois and Kansas before coming to TMCC in 1986.

In the late 1980s, the TMCC Foundation was not able to raise enough money to meet the scholarship needs of the College, and the Nevada System of Higher Education (NSHE) Chancellor, Mark Dawson, approached Gwaltney about possibly discontinuing the TMCC Foundation. So, he asked for some time and thought of how to revitalize the Foundation.

At the time, Gwaltney was sitting on the Board of Western Industrial Nevada (WIN), chaired by Hal Plummer, a prominent realtor in Reno-Sparks with a dynamic personality. Also, on the Board of Directors of Channel 5, Gwaltney noted the positive outreach efforts of Phil Rose, its Chairman. Phil Rose was a co-owner of Rose-Glenn Advertising, Inc., a principal agency in town at the time. He knew if he recruited groundbreakers of their caliber to be on the TMCC Foundation, others would follow.

“They were outstanding, well-respected leaders of the community,” Gwaltney said. “And not just civic leaders, but I was impressed by their moral leadership qualities, as well.”

Dr. Gwaltney took the two men out to lunch.

“I said that the college doesn’t have a 50-yard line season ticket to give you – you will work for many hours as a volunteer with only the quiet satisfaction knowing the many students you will help over the years,” Gwaltney said. “I looked at them and it only took seconds for them to say ‘yes’.”

And John Gwaltney was correct in his prediction that others would soon jump on board.

“As soon as they joined the TMCC Foundation Board, other truly outstanding people joined,” he said. “We awarded 18 scholarships that first year, and since that time, the Foundation has raised hundreds of thousands of dollars for scholarships.”

The three became friends, Gwaltney and Plummer became close friends across the years.

“I felt like being around these guys in particular made me a better person,” Gwaltney said. “I respected and valued their friendship immensely.”

They revamped the TMCC Foundation and greatly increased the amount of money raised to support student scholarships, Gwaltney said. Plummer and Rose also brought a sense of friendship and exuberance to the Board that became contagious.

“There was such camaraderie on the Board – Phil and Hal were so well-liked,” Gwaltney said. “They did good things and enjoyed some really nice people. Their outlook was ‘Let’s do good things and have a great time while we’re at it’.”

Plummer was a member of the TMCC Foundation Board from 1987-1995 and Chair from 1990-1991. He was awarded an honorary degree at the Commencement Ceremony on May 18, 1994 – an Associate of Applied Science. He also earned a Bachelor of Science in Business from the University of Nevada, Reno in 1957. Plummer also served for five years in the U.S. Army, as Captain of Artillery at his unit in Germany for three years, managing weaponry including a 280mm cannon with nuclear capability.

He was appointed by two Nevada governors to the Nevada Real Estate Commission. His realty business in Reno was the Coldwell Banker Plummer and Associates, Inc. real estate firm. His son Darrell purchased the company and carries on Plummer’s business, now known as Sierra Nevada Properties.

“The Coldwell Banker Endowment is a scholarship for students at TMCC established for and by Hal Plummer,” said Gretchen Alt Sawyer, Executive Director of the TMCC Foundation.

Hal Plummer and Phil Rose were active on the TMCC Foundation Board for years, and when they started to retire from community boards, TMCC was one of the last committees they left, Gwaltney said. Phil Rose passed away in 2014.

At the community college, Board members and teachers can change lives

Dr. Gwaltney said that Board members and teachers can make a difference at a community college that is not quite possible at other institutions.

After Dr. Gwaltney retired as president, he continued to teach economics at the College.

“At Ivy League schools, you start with geniuses and finish with geniuses,” he said. “Students at a community college are faced with so much – they turn their lives around at TMCC,” he said. “As a teacher here, you touch lives.”