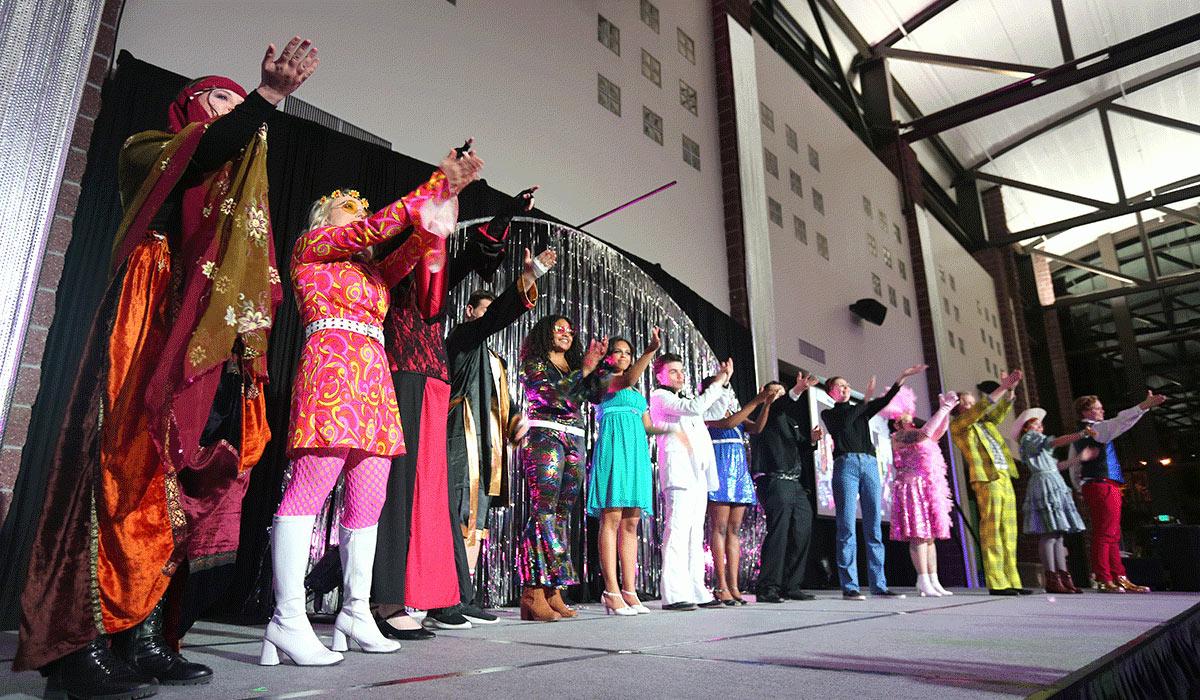 ​Murder Mystery at the Disco a Huge Success

On April 1, the Student Center at TMCC’s Dandini Campus turned into the nexus ​of ​groovy tunes and 1970s-themed outfits with the fundraiser and performing arts’ Murder Mystery at the Disco. With over 200 attendees, several sponsors, six vendors who donated wine and beer, and one very cool DJ, the evening introduced TMCC student-actors to audience members, dropping hints through casual conversations. A photo booth courtesy of Tap Snap and a silent art auction also added to the fun and vibrant ambiance of an event that celebrated 50 years of TMCC in a very big way.

Fourteen TMCC student-actors filled out the cast of this murder mystery drama that tasked students with the creation and development of their own characters. This was the first time since 2019 that TMCC Performing Arts​ has​ hosted a live performance in front of an audience.

And yet, in addition to the excellence displayed on stage, what twinkled brilliantly like a disco ball was the community support demonstrated by this event. Raising a total of $50,000, event sponsors and other generous donors not only demonstrated their support through sponsorship or through donated items, they—like many of the guests—arrived in costume and ready to solve the Murder Mystery at the Disco.

The sold-out event was also made possible by several TMCC departments, faculty, staff, students, and volunteers, including: TMCC’s Culinary Arts program, which prepared the ​multi​-course meal, and several Nevada Promise Scholars who arrived the morning before the event to set the myriad tables and to fold napkins. Foundation Board Member Fred Altmann would ensure guests would have a night to remember by donating a bottle of wine from his family’s vineyard, Altmann Family Vineyards, to each guest.

Funds raised by the event will support the Performing Arts and Culinary Arts Programs as well as the proposed EastView project, an innovative and collaborative new space proposed at the Dandini Campus that will include instructional areas for technology, culinary arts, hospitality and tourism and the performing arts.

“We are so grateful for the outpouring of support in honor of TMCC’s 50-year legacy of supporting student success through academic programs… and also that will support our ability to continue this important work in the years to come. Funds from this event will contribute to our newest endeavor, the EastView project, which will offer Performing Arts a permanent home, but also open TMCC students to new opportunities in emerging industries in coding, AI and much, much more,” said Executive Director of the TMCC Foundation Gretchen Sawyer.

TMCC's Murder Mystery at the Disco invited guests to dress in their best 1970s-inspired attire.

Guests were treated to a multi-course meal prepared by TMCC Culinary Arts as the mystery unfolded on stage.

The cast along with Director Holly Natwora and Technical Director Jared Sorensen.

On Thursday, April 14, the nonprofit S.E.E.4Vets donated scholarship funds for veteran-students at TMCC.

On April 14, TMCC’s Veterans Upward Bound (VUB) Program received not one, but two, monetary donations. The first from Washoe County Commissioner Jeanne Herman. The $2,500 donation was made to nonprofits and governments that benefit people in our community. Called “District Funds”, Commissioner Herman, a passionate supporter of veterans, presented the check to VUB Director Robert Hernandez and TMCC Leadership.

The VUB also received a generous gift from non-profit and Arizona-based organization S.E.E.4Vets. A longtime supporter of scholarships for veterans in pursuit of a certificate or degree in higher education at TMCC, they have once again offered this group of students the means to attain scholarships for years to come.

This kind of financial support is important for student populations, like veterans, who face additional barriers to higher education. “The VUB provides multiple services to prepare our Nevada veterans for success in achieving a college degree. The S.E.E.4VETS endowment will provide much-needed scholarships, and will address the financial struggles many of our veterans face in moving forward. Both Commissioner Herman and S.E.E.4VETS understand the needs of these veterans. Their contributions demonstrate a commitment to caring for our men and women who have served this country,” said VUB Director Robert Hernandez.

Students who are former VUB students, enrolled in 6 credits, and have at least a 2.0 are eligible to receive these scholarship funds. Since 2018, over $18,000 in scholarships have been awarded to first-generation and low-income veterans who are in pursuit of diverse array of certificates and degrees in disciplines that include Logistics Management, Engineering, Criminal Justice, Graphic Design, Computer Science, Nursing and Architecture, among several others.

Scholarships from organizations like S.E.E.4Vets can provide the financial support that can also make the service-to-civilian/student transition easier, so the veteran-student can focus on what they need to: excelling in their classes. Scholarships provided by S.E.E.4Vets are unique, however; they are provided to students at the start of every semester as they pursue a certificate and/or a degree, not just once.

“The S.E.E.4Vets Veterans Legacy endowment at TMCC is important for several reasons: first it messages to the community that a non-profit veteran organization is serious about supporting a veteran’s educational journey to the extent to create that funding in perpetuity. We also hope that this encourages the local community to contribute to these scholarship funds and to support their veterans on their educational journeys at TMCC,” said Ray Torres, S.E.E.4Vets Founder and Chairman of the Board.

TMCC’s Budget and Planning Accounting Manager Tara Hawkins recently passed her CPA Exam; this is one of many accolades over Hawkins’ long service at TMCC. She was also recognized as a Professional of the Month for her excellent service and dedication to the college, always with an eye on supporting student success.

TMCC values professional development among its employees, especially in domains that directly impact the customer service experienced by students; Hawkins, who is a part of a hard-working professional staff who assist students with their payment of tuition and fees, receiving financial aid disbursements, refunds and other financial concerns.