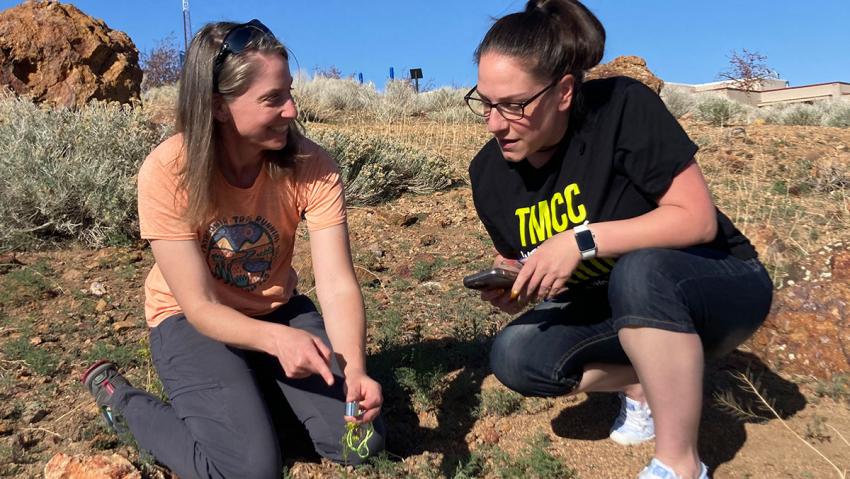 TMCC student Angela Sanchez didn’t expect to be on the front lines of TMCC’s inaugural EcoBlitz, an event that will invite students, faculty, staff and community members to get to know the natural world around them.

Sanchez, who first came to TMCC in 2000 but did not complete a degree at that time, returned this year to do exactly that. “I wanted to finish what I started 20 years ago,” she said. “TMCC has given me the opportunity to do so.”

Sanchez, who is seeking a certificate of achievement in bookkeeping, is also an assistant curator for the TMCC Natural History Museum. “[When I applied for the position], I didn’t have any kind of science background. I thought that the job would entail data entry of specimens,” she said. However, under the direction of TMCC Biology Professors Dr. Megan Lahti and Dr. Cecilia Vigil, after seven months, Sanchez discovered a love of science. “I was having such a good time learning about the plans and animal specimens...and this has given me the opportunity to be a part of something bigger by participating in the EcoBlitz.”

Sanchez is one of two TMCC students who are helping to organize the event.  She is joined by Cassandra Barber, who will graduate in 2022 with her associate of science degree in Environmental Science. Barber, who also works as an event coordinator, is hoping to share her love of science with others in the community.

“Throughout the Ecoblitz event, I hope we accomplish an opportunity for the community to become involved in celebrating, protecting, and learning more about the diverse biological significance that our amazing region has to offer,” she said.

Dr. Vigil, who will act as Principal Investigator for the EcoBlitz, was inspired by the original “BioBlitz,” which was a creation by the National Geographic Society in 1996 as an event that encouraged “the citizens of science” to complete an intense survey of a prescribed area over the course of 24-hours. The goal of this intense survey was to document a “snapshot” of a particular time and place, but also to invite members of the general public to experience “science” in a very hands-on way.

“We’re calling this event an ‘EcoBlitz’ because it explores not only the biotic, living components, it’s also abiotic, the non-living ones as well. We’re going to be sampling soil, sampling water, so when we do our report, it will be a full ecology of Rancho San Rafael Park,” Vigil said. While the event is certainly open to TMCC students in biology and environmental sciences classes, Vigil is interested in cultivating a solid community of the “citizens of science” that will include (potentially) everyone in the Reno/Sparks area.

The EcoBlitz Team, which includes TMCC Biology Professor Dr. Megan Lahti, TMCC Environmental Science Professor Dr. Sameer Bhattarai as well as Event Coordinators Sanchez and Barber, is funded by a Pilot Grant under Nevada INBRE. The event on May 7 is one of a two-series event (the next EcoBlitz will happen on October 1, 2021); both events will be held over a 24-hour period in Rancho San Rafael Park and seek to add to the knowledge of our own natural environment while sparking the public’s interest in science.

“The idea is to get a snapshot picture in those 12-24 hours of what is living in the park,” said Vigil. This includes animals, plants, insects... When you do this in science it’s called ‘a baseline.’ No one has done this before. This becomes important for many reasons, but especially because of climate change: what differences are we going to see? And also, it’s an urban green park, so we can study the effects of traffic and pollution on this area. I am hoping during my career at TMCC, I’ll see those differences as we track it over 10-20 years,” said Vigil. She also explained participants will only be allowed to access the park during its operating hours. Nighttime surveillance of the flora and fauna will continue thanks to camera traps as well as a technology called “anabat” that can identify bat species using echolocation.

While the amount of data collected will depend upon the number of participants, Sanchez and Barber will assist with the data collection and data analysis, which will result in a report that will be released on the EcoBlitz website.

The event is also opening their eyes to the beauty of science: “I realize now that you don’t need to have a science background to observe and research nature,” said Sanchez.

You Can Become a Citizen of Science

Citizen science is a concept and a practice that has been around a while, but that is becoming more popular with scientists who literally need an extra set of eyes and hands to collect data about the natural world. “One of the first practices of public participation was when they didn’t know where the monarch butterflies went,” Vigil explained. “Dr. Urquhart, a Canadian scientist, who was looking into this started putting articles and ads in newspapers asking people to contact him if they saw a monarch butterfly. He was the one who started calling these people who wanted to be involved ‘citizens of science.’” By using “lay people” this scientist was able to discover that monarch butterflies migrate to Mexico.

So too the TMCC EcoBlitz team hopes that those interested in discovering and exploring our own unique ecology will lend their eyes, ears, and cellphones in an effort to capture a snapshot of resides at San Rafael Park. The EcoBlitz divides the day into three “shifts” that participants can sign up for on the event website. (Psssst: those who register will also earn swag items, such as reusable water bottles, mugs, t-shirts and hats from TMCC.)

Registration will take 15–30 minutes, and includes a brief training on how to use the iNaturalist app that the event will use for data collection. Basically, participants will just need to register for a particular time to participate and to download the iNaturalist app onto their phone. The app allows you to take a picture while taking note of your GPS position and a timestamp, so recording what you observe during the EcoBlitz is literally just as easy as taking a selfie.

“We can easily accrue data that way,” Vigil said.

Discover the World Around You 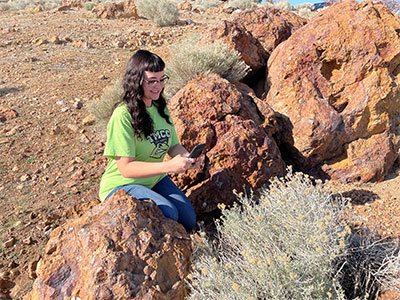 Cassandra Barber, who serves as one of two event coordinators for the EcoBlitz, said that this experience has opened her eyes to real-world applications of her degree program.

Whether you’re a student, a working adult, retired, if you love science or you’ve always been interested in science but never participated in an event like this, the EcoBlitz event could be the perfect first step into a new career path or a rewarding hobby. Registering for one of the three time slots (of which you don’t have to spend the entire four hours) takes no more than 30 minutes and you, too, can contribute to the baseline knowledge of this square mile of Reno’s wild/urban spaces.

For TMCC students Sanchez and Barber, the event is opening new learning opportunities in not only science, but in data collection and community service. “As a college student, I am often asked: ‘What is the real-world application for your degree?’ Sometimes it is challenging to fully comprehend what the career application of a degree looks like, especially when just beginning an academic journey….[however,] experiences such as [the EcoBlitz] not only look fantastic on a resume but, ultimately help students better determine what real-world applications are applicable for their degree. These experiences are one of the most beneficial resources TMCC offers to students and I encourage every student to participate in one in their field of study,” Barber said.

For Sanchez, participating in the EcoBlitz has been life-changing. “TMCC itself is set in a beautiful landscape, with trees, birds and scenery that I had never noticed before stepping into this position. I now essentially ‘stop to smell the roses’ and find myself observing, and appreciating the wildlife around me,” she said.