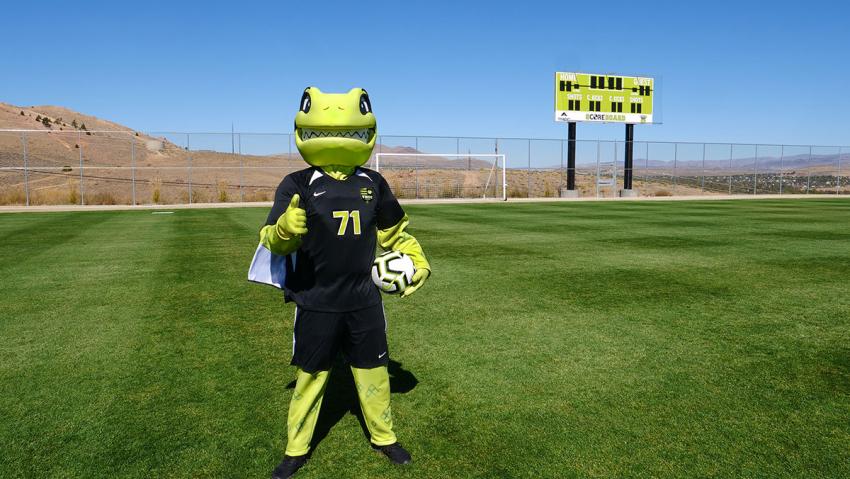 On March 22, Truckee Meadows Community College officially announced a new face of its Athletics department. In the form of a new mascot, “Mighty the Lizard” will serve as the primary community representative unique to TMCC Athletics starting this season.

Inspired by the success and community support of TMCC’s inaugural season in 2019, Mighty the Lizard was a collaborative effort between TMCC Athletics, Recruitment and Access Center, and Marketing and Communications team. The name “Mighty,” selected and approved by members of the aforementioned departments in addition to representatives from Student Government Association, Academic Advising and Student Services, aims to represent the resiliency and dedication of TMCC student-athletes in their pursuit of excellence on and off the field.

Mighty joins Wizard the Lizard, TMCC’s official campus-wide mascot representative, as the official mascot unique to TMCC Athletic teams. While the two mascots share some similar attributes, such as their TMCC green color, lizard-like figure, and gender neutrality, Mighty brings a combination of ferocity and friendliness alongside a more athletic build. Increased performer visibility and comfort will allow Mighty to be much more of a participant, and interact more intimately with players, fans, and supporters alike.

“We are excited to have a representative specific to our program,” said Athletic Director Dr. Tina Ruff. “We believe that Mighty can help us continue to grow into new parts of the community as we look to expand moving forward.”