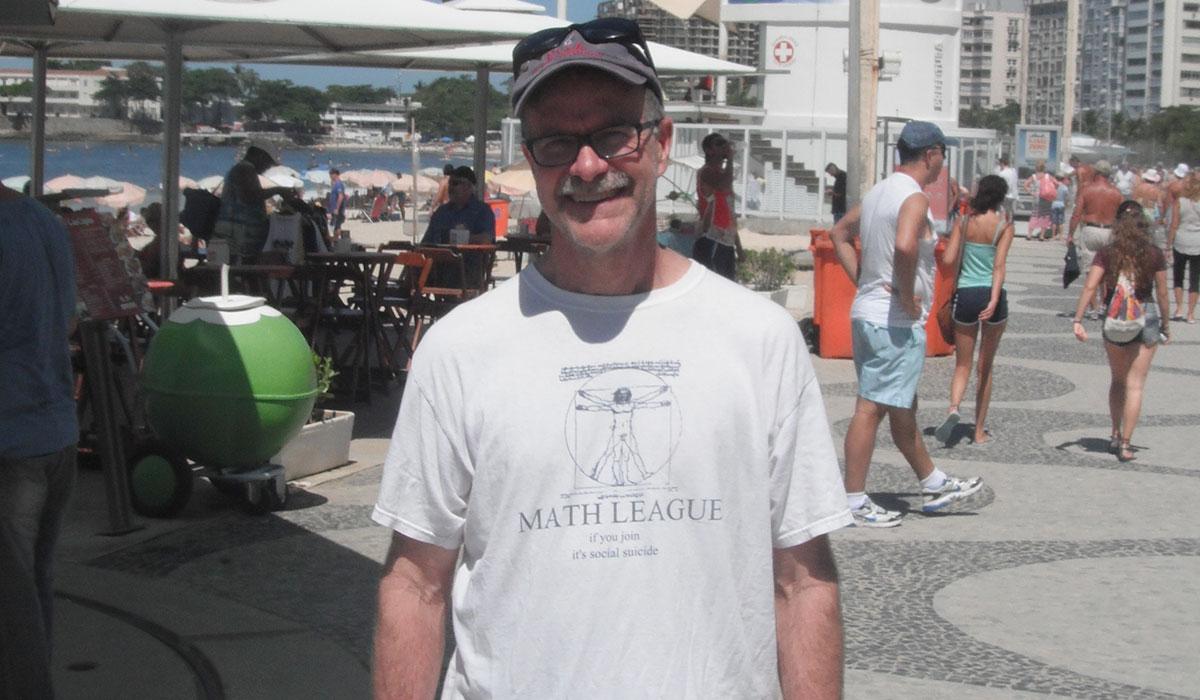 If you’ve ever wondered: why, actually, is the sky blue?, then you share a unique kind of curiosity with TMCC Mathematics Professor Kurt Ehlers. “All of my life, I’ve liked to figure out how things work,” he said.  For the past few months, media from around the globe reached out to Ehlers for his unique insights in explaining why things are the way they are: how the numbers behind reality add up to the universe we perceive around us.

Ehlers teaches upper-level mathematics classes at TMCC, which include Calculus II, Differential Equations, and Linear Algebra—classes that are required by students who plan on majoring in the sciences, mathematics, engineering or computer science. But, he also teaches math classes for other majors, too, including math for Allied Health majors (like Dental Hygiene), geometry for students studying paralegal, and math for the technical trades.

“So I teach everything from advanced math to what is essentially shop math,” he said. “But I really like it, working with all those students. Each is a completely different group.”

Explaining Why Things Are the Way They Are

Ehlers claims that as a young person he wasn’t particularly “good” at math; what got him interested in the subject had less to do with what was going on in the classroom, and more of the explanations for how and why the world worked the way it does.

“My [high school math teacher] probably wouldn’t have chosen me as the one to go on in math, because I didn’t listen very well...I was always doing math, just not what was necessarily what was going on in class,” he said. “He would be showing us these problems and I was always trying to figure out why things work the way they do. I guess I was a mathematician from the very beginning.”

In the seventh grade, Ehlers came up with the proof of the quadratic formula on his own. A classmate took note of the accomplishment, saying as much in a note in Ehlers’s yearbook. “The person who wrote that became a really famous classical pianist... He was a really smart guy, and he could appreciate what I’d done. That yearbook is one of my most prized possessions,” Ehlers said. 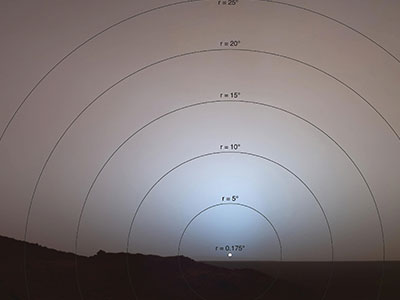 This is a picture of the blue Martian sunset over the Gusev crater taken by the Mars Rover Spirit. Ehlers was one of three researchers who discovered what causes the sunset to have colors reversed from what we see here on Earth.

This curiosity about how the world works surfaces in Ehlers’s ongoing research. But this wasn’t always necessarily the case. “What I enjoy about math has evolved over the years. At times, I really liked very abstract parts of pure math. But I would say these days, I like to use math to understand nature. I do research in mathematical biology and in optics, the study of light. My current passion is the study of light in nature,” he said.

His interest in light persists: Ehlers has been a co-researcher on several grants that have provided funding for TMCC students to participate in research projects at the Desert Research Institute (DRI) and at UNR. A recent grant, if funded, will provide opportunities for TMCC students to work with research groups studying the role of wildfires on the desert environment at DRI. This research will be an important part of climate modeling and wildfire control.

The Journey to TMCC

Ehlers began his career as a naval officer, following his graduation from the Naval Academy in Annapolis, Maryland which enabled him to carry mathematics around the world with him for several years. “With math, all it takes is a piece of paper and a pencil, and that is something I appreciate, even during that time when I was in the Navy where I wouldn’t have been able to do physics or chemistry experiments, but I could still do math. I did that for many years before returning to graduate school,” he said.

Ehlers would earn a Ph.D. in Mathematics from the University of California at Santa Cruz, but the path after his degree wasn’t at all certain. “That was a time right after the Soviet Union dissolved [and] the U.S. was flooded with scientists and mathematicians. It was really hard to find jobs in those fields.”

Yet, Ehlers’s collaborator on a research project on biofluid dynamics who happened to be a Brazilian mathematician, helped Ehlers to find an academic position in Brazil where he worked at the Federal University of Rio De Janeiro as a Research Post-Doc. “I actually planned on staying in Brazil,” he said, but a family tragedy forced Ehlers to return to the United States, which led him to his current full-time teaching position at TMCC.

Ehlers creates a unique learning environment for the students in his classes, no matter if they are in Calculus III or the class he affectionately calls “shop-math.” “There’s a common belief that you shouldn’t talk about the research that you do in math classes because it will just go over the heads of the students,” he said. “But, I think a lot of students are really interested in what my colleagues or I do as far as research goes.”

Early on every semester, instead of opening the textbook right away, Ehlers begins class by explaining why the sky is blue.  “It’s a question that you can understand at different levels of sophistication. I even bring it up to students who are going to become machinists,” he said.

In addition to the classes he teaches at both TMCC and UNR, Ehlers also created and continues to run what he calls “Math League”, an informal club that meets weekly in which Ehlers demonstrates how upper-level math can solve the mysteries of the world around us.

Math League, which Ehlers began twelve years ago, has continued to meet every Thursday afternoon despite the challenges posed by COVID-19 and remote learning.  Topics that Ehlers covers really range the gamut of basically everything: how we perceive color, the optics of a rainbow, chaos and fractals, and number theory, to name a few examples.

“Every week I come up with something different. Students just show up and I give a lecture on something that they might find interesting,” he said. Before COVID-19, these meetings took place in Ehlers’s office at the Dandini Campus, and most times were completely unscripted. “Sometimes I never actually got to the lecture because the discussion would just take on a life of its own,” he said.

Math League meets on Zoom these days, and Ehlers prepares his material in advance because he admits that getting a discussion going using the online platform is nearly impossible. Yet, despite this challenge, he has roughly 40 students who show up on a regular basis to learn more about how mathematics can make sense of the world.

“[Math League] has been really successful,” he admitted. “It’s just this low-commitment club you don’t have to join. And, most of the time I try to surprise the students who attend with a topic they wouldn’t at all expect. And that’s the point: to do something they wouldn’t see in any of their classes.”

Why Study STEM at TMCC

While it’s hardly news that a degree in any STEM field opens doors to a long a successful career in rapidly growing industries, Ehlers believes that TMCC prepares students for the challenges of a four-year degree and beyond. “TMCC has really solid faculty in math and all the sciences,” he said. “Students here also get the benefit of small classes in addition to our strong faculty.”

For Ehlers, TMCC has enabled him to teach students the conventional mathematical skills they need to learn while showing them the research and other unique applications of the material they learn in class.

“I think students are interested now more than ever in what’s going on in science beyond what they study in their classes. When I was an undergraduate, we were never given any indication whatsoever of what research our professors were doing. I remember sitting in my math classes thinking: well, hasn’t everything already been done? We’ve been studying math for more than 2,000 years. What could be left to do? But nowadays we do a lot better job of telling our students what’s out there, what are we studying, and what interesting problems are being researched by others in the field. I bring these topics up to my students,” he said.

Ehlers has seen many students continue to Ph.D. programs and obtain high-level careers in industries that require the skills that upper-level mathematics teaches: critical and analytical thinking, problem-solving, and creativity.

“I think we do a really good job preparing our students at TMCC... and taking your beginning science classes with us is a really good idea. You get a much more personal touch with classes. It’s easier to approach a professor when there are only 30 students in a class rather than 300,” he said.

In any case, Ehlers’s classes will spike your curiosity about the world around you: the color of the sunset, the function of an airplane’s tail rudder, and why we perceive color the way we do... and perhaps inspire new questions that only math can find the answers to.

For more information about studying Mathematics at TMCC, contact the department at 775-673-7181.