One Team One Dream at the TMCC Fire Academy 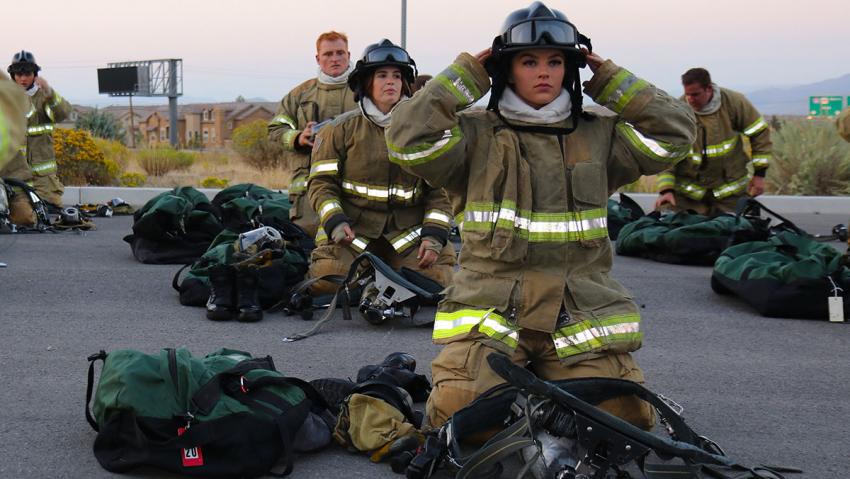 It’s 6 p.m. on a Tuesday evening. The sun fades behind the Sierra Nevada Range and the hazy smoke which has lingered in the air for weeks due to the wildfires turns the sunset orange. Twenty-one fire cadets in the TMCC Fire Academy organize themselves into a strict formation of four lines in front of the William N. Pennington Health Science Center (HSC). Masked, wearing their black shoes (which were shined by their own hands the night before), ironed black uniforms, the cadets stand at attention as Commander Nick Corona announces that he will begin inspecting their gear.

It’s a detail-oriented process, as Corona searches for what is known as “Irish pendants” or IP (a.k.a. a small stray thread), pieces of fuzz or other details that may signal a cadet having overlooked some aspect of their professional attire. If he finds an IP, the entire squad is subject to 100 push-ups, done in unison 25 at a time, with an extra one for good measure (or “for the academy”) before they shout the motto: “One team, one dream!”

The squad will also perform a turn-out time drill in which the cadets are tasked with donning their fire gear—all of it—in 60 seconds or less. Although they’ve only been in the program since August, every single one makes the time, and the fastest cadet was dressed in half the required time. 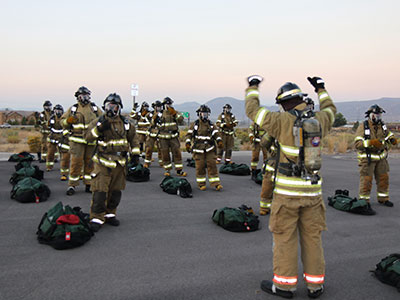 Every cadet met the 60-second time requirement for the turn-out drill, and celebrate as a team.

“This drill is really important, because when we get a call for a fire, we have to get there as quickly as possible,” explained Corona. “Especially with the way fires are burning now, every second counts...and whether or not you can save that house or structure from burning completely is a matter of minutes and sometimes seconds.”

Every year, the TMCC Fire Academy prepares students for a rigorous career that, at its most fundamental level, tests human bravery and strength. In a year which has seen the worst wildfire season on record, with a combined 5 million acres which continue to burn in California, Oregon, and Washington, fire professionals will be in demand for the foreseeable future…as fires show no signs of slowing down.

This past week, cadets in the Fire Academy were doing some heavy lifting...literally. “Sometimes we have to get on roofs or climb through windows… and one of the biggest tools we have at our disposal are ladders,” said Corona. However, these aren’t the ladders you find at your local Home Depot: these ladders are built to be up against a burning building... even a very tall one. 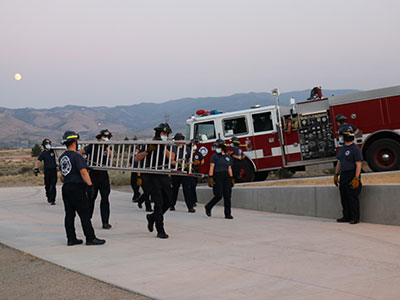 Cadets learn to carry ladders on teams of 2 or 3...and also to carry them individually as a part of their physical training.

“These ladders are anywhere from 130 to 150 pounds. The ability to physically carry the ladders, raise them, extend them, all of that while carrying 50 pounds of gear on your person is probably one of the most challenging disciplines in the Fire Academy,” said Corona. Although there are certainly lessons that offer advice regarding balance points, when it comes to hefting a 150-pound ladder, it comes down to physical strength. Needless to say, maintaining peak physical fitness is a key component of the Fire Academy program, whose paramilitary approach to training teaches students that every detail matters, and nothing short of excellence can get the job done.

Well, excellence “on the hop,” which means tasks must be completed correctly, quickly and efficiently. Academy Leader Cadet Cody Harlan, who came to the Fire Academy from the National Guard, is familiar with the line of command and the precision often found in the armed forces. What the Fire Academy—and a future career as a firefighter—will give him is a sense of community and fulfillment. “I’ve always worked for salary increases, stability and for the end-goal of retirement. Then I asked myself: what if I actually enjoyed going to work every day? What would it look like being fulfilled by the work I do that also has value in my community? Given my skill sets, firefighting is what I settled on, and [being a cadet in the Fire Academy] is a major milestone of reaching that goal,” he said.

As Academy Lead, Harlan directs his fellow cadets in exercises, and is also responsible for providing motivation and support in some of the academy’s tougher moments, like lifting heavy ladders or twelve-hour long training days. “Every day is an opportunity for me to learn a new skill and to perfect it. Even though the program is very physically and mentally challenging, it’s really fulfilling and rewarding to meet those accomplishments at the end of the day.” 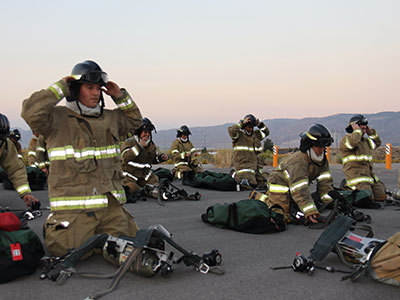 The Fire Academy program challenges cadets to meet high expectations and to follow strict protocols at all times.

He explains that Saturday sessions, which typically last for 12 hours, begin with “with really intense physical training (PT) in the morning and then you go into hard training for the rest of the day.” An example of this training? One Saturday, the cadets ran the same number of stairs in the Trade Towers, but in the five-story training tower at the facility in Carson City (meaning they had to run up and down the stairs several times to achieve that number) while wearing the full turn-out gear, which adds an additional fifty pounds.

It’s not that these cadets don’t suffer—they certainly do—instead, it’s the sense of camaraderie and teamwork that helps everyone to meet the physical and mental demands of the Fire Academy. “When you get to the end of [a day like that], you feel really accomplished. And it’s really good team building because nothing builds a team like when you are all suffering together,” he said.

All that physical training is done for good reason: the physical demands of the job are high, given the weight of the equipment and the urgency that comes along with the work putting out a raging fire. The focus on strength, mental acuity and attitude all play major roles in the profession.

“Our cadets go through a regimented physical fitness program as a part of the Fire Academy. And we’re constantly working on building upper body strength. At the end of the day, when they get that certificate we’re saying that they are qualified to become a firefighter, so we’ve got to make sure they truly are,” said Corona.

While the physical training is certainly a large part of the Fire Academy, the curriculum also includes plenty of classroom time... and, if you ask any cadet, a considerable amount of homework. Cadets attend class sessions at the HSC every Tuesday and Thursday night from 6-10 p.m. This is when they receive skills instruction that is delivered in lecture format and in-person practice that is reinforced through homework assignments. “The homework takes a really long time, but it really sets those skills and knowledge in stone,” said Harlan. “When you come back and do those skills in-person on Saturday, you really know what to expect and how to apply that knowledge.” The cadets are tested on this material the following Tuesday. 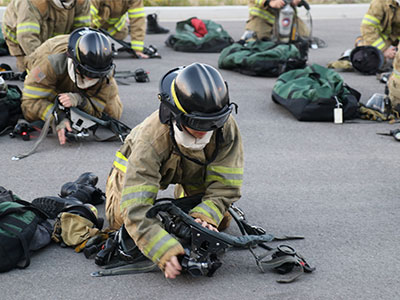 Although the climate in the classroom and in physical training is high, teamwork and camaraderie are staples of firefighter culture.

While that kind of demanding academic and physical training might foster competition amongst the cadets, it doesn’t. Instead, the unique aspect of being a firefighter is its sense of community. “I’ve never had a group of people come together so quickly as I have in this academy. It’s really good to have people who have the same drive and motivation and same end goal as you. When I’m at home shining my shoes at night, or when I’m up to 11 at night doing homework and I have to get up at 4:30 in the morning to go to work the next day, I know that my classmates are doing the same thing as me,” Harlan said. After all, at its core, the Fire Service is a helping community and most students who apply do so because they want to make a positive difference in the lives of those around them.

Despite the strict discipline and training schedule—nevermind the ongoing global pandemic—this year, the program saw record numbers of applicants. The large number of applicants suggests that students see value in finding ways to support their communities in this time of need. 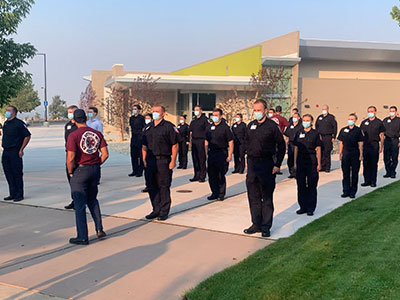 This year, the Fire Academy saw a record number of applicants and admitted six female cadets, a historic high.

“My concern, actually, was that we would see record low numbers of students applying to this program [this year,]” said Corona. “But, it’s been the opposite. I think people are realizing that we need firefighters now more than ever, just like we need nurses, doctors and people who are out on the front lines making a difference. We got 75 applicants this year, which was probably one of the higher numbers that I've seen come across my table.”

Of those 75 applicants, only 25 spots were available for the class of 2020. Of those 25, six cadets were female, which is the largest percentage of female cadets in any Fire Academy to date. One female cadet, Lacee Gardner, said she came to the fire service after a life-changing incident that shifted her away from a career in veterinary medicine. “I decided to change [my focus] after that incident. I took my EMT class at TMCC and all of the guys in the class were all going for firefighting. After hearing and spending a whole semester with them, I wanted to take a fire class. And, fell in love with fire more than the medical school,” she said.

Gardner and her fellow female cadets are joined by two new female instructors in the program. It’s an atmosphere she finds inspiring. “We are constantly cheering each other on, and with our Academy Leader here, Harlan, he is constantly reassuring us that we are one team with one dream,” she said. 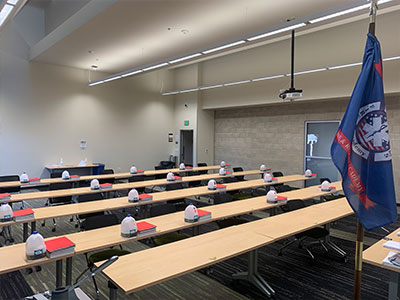 Each Cadet’s classroom space is inspected and expected to be neat and tidy.

Corona sees this as not only a change in the Fire Academy program, but across the profession of firefighting. “What’s really cool about the fire service is its really diverse culture, especially in recent times. It used to be that it was a male-dominated profession, but the stigma that we are ‘firemen’ is no longer there...instead, we are firefighters,” said Corona.

One Team, One Dream

If all goes well, these 21 cadets will graduate with their certificate of competition, the first step in their journey to becoming professional firefighters. The program, Gardner said, is challenging, but it is certainly worth it. “This is not something you can just throw on the back-burner. This is something that needs [your full attention].... If this is your career, you need to be fully focused on this program,” she said.

The graduation ceremony, which happens in December, recognizes the demanding physical, mental and emotional challenges that the cadets weathered in the fifteen-week program and announces that this is only the beginning in a life of service.

“The academy is very physically demanding and deeply rewarding in the same way,” said Corona. “You get what you put into it... And the academy is one of those things where it’s a great opportunity to learn about yourself and to get to know where your limits are, and you get to push those boundaries and become successful. Once you graduate, you’ll be given the knowledge and the experience to be trained as a professional firefighter, and to start your career in the fire service.” 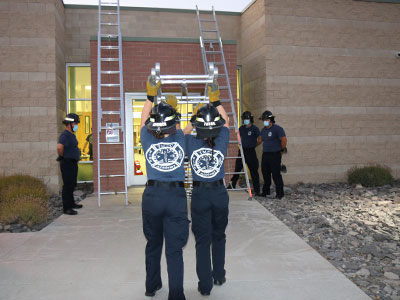 These twenty-one cadets are on their way to becoming the next generation of fire professionals.

The program, which is saturated in the firefighting culture of focusing on tiny details, completing tasks “on the hop,” and to expect push-ups for every infraction, has a greater end goal in mind.