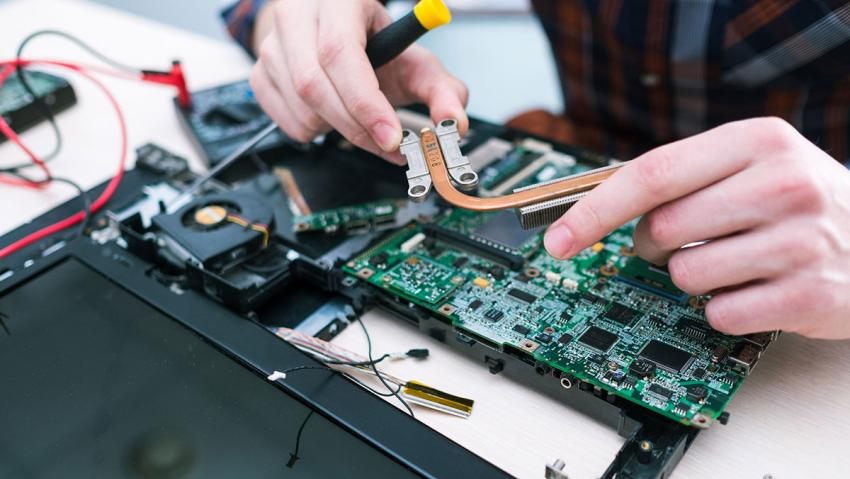 David Alfaro calls Engineering 100 his favorite class at TMCC. “Building a hovercraft was by far one of the coolest things that I have ever done,” he said.  Alfaro, who’s in his fourth semester in the engineering program, likes the challenges posed by programming and robotics, and sees these skills as taking him to goals “out of this world.”

Like many TMCC engineering students, Alfaro started his journey in Engineering 100, a class that will fill the third floor of the Red Mountain Building with the sound of hovercraft come December—which, if you haven’t heard it, sounds a bit like a high-pitched vacuum cleaner. Students in Engineering 100 class (arguably one of TMCC’s best-kept secrets) will have worked in teams on a semester-long project that results in this self-propelled floating robot whose programming and design is meant to carry it on a predetermined path around the lab.

Physical Sciences Professor and Department Chair Daniel Loranz redesigned the introductory class last year, which offers students a hands-on experience unlike any other. “The students work in teams of 4–5 students each, and they build robotic hovercrafts that have to follow a black line on the floor,” he said. Students in the class are loaned a Lego system that includes the computer ‘brain’, sensors, motor, and actuators that form the base of every hovercraft.

“That’s a pretty nice set-up because that costs around $400 each, but we’ve been able to include that as a part of the class,” said Loranz. However, that’s not enough to build the entire hovercraft. Student teams are tasked with deciding how to build the deck of the robot, which invites plenty of creativity and out-of-the-box thinking. “It’s a balance—we give students enough supplies so the cost doesn’t prohibit them from finishing the project, but we don’t want to give them everything because we want them to come up with their own ideas,” said Loranz. 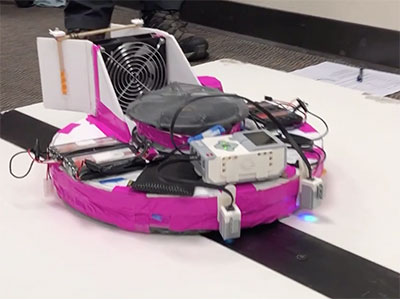 Students in Engineering 100 work all semester in teams to create a hovercraft like this one.

Past design solutions for the hovercraft deck have included giant frisbees, baking pans, foam-core, poster board and even nylon meshing that made the robot look something like a ship at sea.  The semester-long project offers students plenty of challenges and opportunities to test, modify, and iterate their ideas in a very hands-on way. “Really the class is about doing design and working with your team. We’re really trying to get students to not just spend the whole semester talking about what they are going to do, but trying different ideas to see if they work, modifying those approaches and then seeing if those modifications worked—physically going through this process,” he said.

Alfaro remembers this as one of the most challenging and rewarding parts of the class. “A lot of the class was building prototypes, and figuring out what was the problem. With my team, we ran into a lot of prototypes where we didn’t exactly know what was wrong, and we could have asked the instructor for help. But, the way we challenged ourselves was to try and figure it out on our own first, so there were a lot of problems we had to go through,” he said.

As the hovercraft receives ongoing modifications, updates, and tests, Lorenz offers practical lessons to support the students on this semester-long project. These lessons cover topics such as hovercraft physics, electrical systems, how to solder, how to program the Lego robot, and step-by-step instructions of working with relays, to name a few examples.

“Students are kind of nervous at the beginning of the semester,” Lorenz admitted. “They wonder: will I be able to do this? It can seem pretty daunting. But by the end of the semester, there are lots of high-fives and students cheering when their hovercrafts work like they are supposed to. It’s pretty fun to see.”

While the engineering program at TMCC has a lot to recommend it—small class sizes, lots of hands-on instruction and plenty of student-instructor interaction—the reasons to pursue a degree and a career in this field are many. “The first class of the semester, I tell students about the opportunities that are a part of a career in engineering,” said Loranz. These include: low unemployment rates (in 2017, the unemployment rate was around 2%), high annual salaries (the median rate is around $80,000 a year) and you can start your career with a bachelor’s degree.

“Another thing that’s nice about careers in engineering is that you are involved in working on projects that are interesting, and very likely to be helpful to people. You’re using your brain and your hands to solve problems and make life better for people,” said Loranz.

If you’re not quite sure what you want to do, that’s OK: starting in an engineering program like TMCC’s will enable you to take the basic classes that are required for all engineering specializations, including bioengineering which would entail designing new prosthetics or drug delivery systems, or mechanical engineering for machinery, new vehicles or even aerospace. The environment in which you will be working could be equally varied: engineers can work in a traditional office environment, but also something less traditional if you decide to work for a start-up company or in private industry. “That’s the great thing about engineering—it covers a huge range of possibilities,” said Loranz.

And yet, the engineering classroom can offer more than a prerequisite to a degree in this field. No matter their major, Lorenz sees value in taking a class like Engineering 100 where students learn diagnostic thinking and purposeful creative design. “When you’re trying to produce something to fulfill a specific function, you’re learning along the way how to think critically about your parts and how they interact, as well as aspects of teamwork and project management, technical writing, working with your hands, and problem-solving. It’s a great class for people even if they’re not going to be engineers,” said Loranz.

Plus, it goes without saying: building a hovercraft is bound to be fun.

Alfaro is currently enrolled in Calculus, Computer Science, Physics, and Computer Science classes, where he is looking forward to learning more sophisticated programming techniques. “Engineering 100 gave me a foundation [and so] this semester in computer science I will learn professional coding. I’m really excited to learn more about that.  I tried to learn coding on my own time, and that was a little rough. In this class, I will expand on that knowledge a lot,” he said.

TMCC’s Engineering program has been an important part of his academic and professional journey. Alfaro plans on transferring to UNR’s new Aerospace Engineering Bachelor’s program. “I’m actually working as hard as I can to go to space, and my biggest goal is to get into NASA,” he said.

This is a goal that came to Alfaro at a distinct moment while cloud-gazing. “I still remember that day: September 21, 2016. And instead of looking at the clouds, I started looking at this small patch of blue. And suddenly, I realized I was looking at endless space. And then... I knew I wanted to go to space,” he said. Alfaro chose robotics as the method to get him to reach his goal.

To begin working toward these big dreams, Alfaro sees Engineering 100 as a class he encourages other students to try. “This class presents realistic programs that you would find in an engineering project. This class pushes you to find solutions that actually work, and to find creative solutions to problems,” he said. “It’s also the perfect class to take to see if you want to get into engineering or not because it will show you if this is something that you can have fun with.”

For more information about the Engineering Program at TMCC, contact the Physical Sciences Department at 775-673-7183.