Bobcats in your Backyard 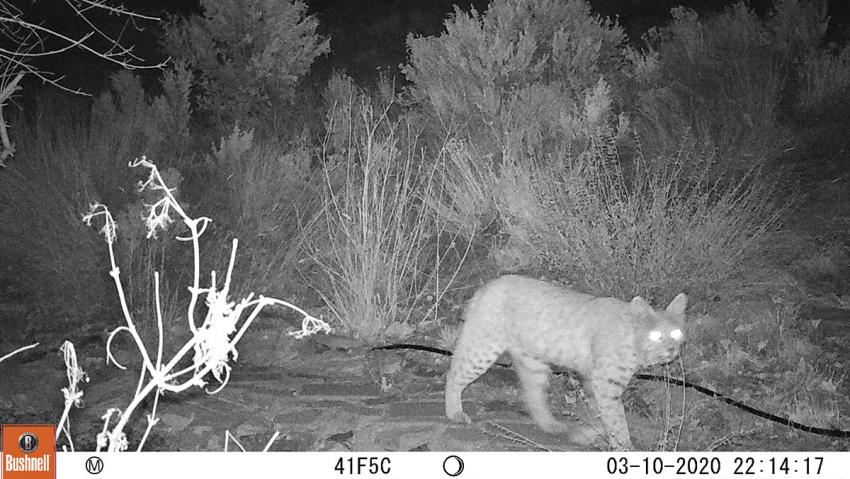 This semester, TMCC student Christina Cavallaro is assisting Biology Professor Dr. Meeghan Gray in the first months of a multi-year longitudinal study focused on bobcats in urban environments. For now, the study is limited to fifteen sites in West Reno where game cameras are poised and ready to catch any unexpected action.

“First, I worked with Dr. Gray to set up the cameras at different sites. Now, we go out to each site to switch out the SD cards from the cameras to see what images they capture,” said Cavallaro, who is pursuing an Associate of Science at TMCC, and who is a junior in the Wildlife Ecology and Conservation program at UNR.

“Cats are my favorite animals,” said Cavallaro. “I’ve always wanted to study large carnivores, but those opportunities are few and far between.” Cavallaro admits that advice from others to get research experience led her to discover that Dr. Gray was putting together this study. “I didn’t know this was available until I asked. This opportunity is a dream come true.”

The study, which launched in February of 2020, seeks to answer very basic questions about urban bobcats in Reno: in what activities are the bobcats engaged? What time of day are they doing those activities? Are they in the urban environment more because we’ve limited other habitats or have they always been around and we are just noticing them more often?

“I’ve worked on a lot of large mammal research—and honestly, there’s not a lot we know about bobcats. They are one of the least studied of the big cat species, said Gray. “Also, there’s even less information on bobcats in urban environments.”

The bobcat, or Lynx rufus, is twice the size of a typical housecat, with dappled or mottled brown fur, and (most times) with tufts of fur on their ears. Typically, they’re thought to follow the nocturnal pattern that we associate with all cat species: sleeping during the day and hunting at night. However, recent sightings and anecdotal evidence have started suggesting otherwise. “I have read studies that the more urban association an animal like a bobcat has, the more likely they are to be nocturnal, but that doesn’t seem like it’s the case here,” said Cavallaro, who helps Gray to process sometimes up to 15,000 images a week that are captured from the game cameras.

“The cameras are pretty sensitive to movement,” explained Gray. “So, sometimes they are triggered by a plant that’s moving due to wind.” She has also programmed the cameras to take three images—not just one—when triggered. “Often, the first picture, even if it’s triggered by an animal, isn’t the best one. It’s usually the second or third shot that is the best.” 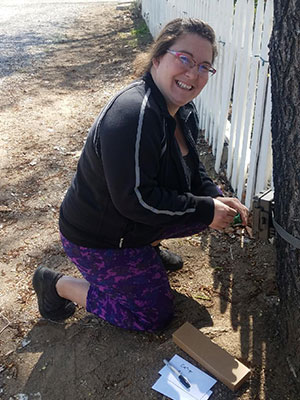 TMCC student Christina Cavallaro collects the SD cards from game cameras and processes the images, looking for evidence of bobcats in urban settings.

Even two months in, Gray and Cavallaro have found intriguing evidence that bobcats aren’t the nocturnal hunters we thought they were... and that they have certainly adapted to urban environments, which they use as their hunting ground.

“They are definitely more active during the day than we had thought. Most cats do their hunting at night. But, according to the images we have captured, bobcats are out during the early morning and late afternoon. We’re even getting images of them in broad daylight,” said Gray.  She also noted that they seemed “comfortable” in urban environments. “Or, maybe they are just really hungry.”

So far, the most compelling images depict a fight between a coyote and a bobcat. “I don’t know if that kind of encounter has been documented before,” said Gray who described the scene unfolding something like this: the bobcat attacked and killed one of the homeowner’s chickens.  Attracted by the recently dispatched prey, a coyote arrived on the scene, ready to claim the bobcat’s chicken dinner as her own, and a dispute ensued. “The bobcat was left empty handed,” Gray said but commented that the footage provides some evidence that there is, in fact, interaction between these two predator species.

“It’s so amazing to have the opportunity to study that kind of interaction between two predators who basically have the same role in that environment. That really got me thinking: is this something that normally happens?” asked Cavallaro, who is planning on assisting with this study beyond the semester. After all, the work is important: “the more we learn about different species in urban settings, the more we can work for the conservation of those animals in urban settings,” she said.

The Future of Studying Urban Bobcats

Although this is the study’s first year, Gray anticipates many more years to follow that will add depth to an already compelling look at a local species that is glimpsed far too rarely. “I’m already working with the Nevada Department of Wildlife. They’ve shared some genetic material from bobcats that were trapped for their pelts,” said Gray, who is already looking for ways to expand the study.

In future years, Gray envisions collaring bobcats to follow their specific movements more closely as well as mapping the species genetic paths. With so much left to discover, it’s no wonder that Gray and Cavallaro admit that whatever they find, it’s exciting.

For more information about studying Biology at TMCC, contact the department at 775-673-8251.