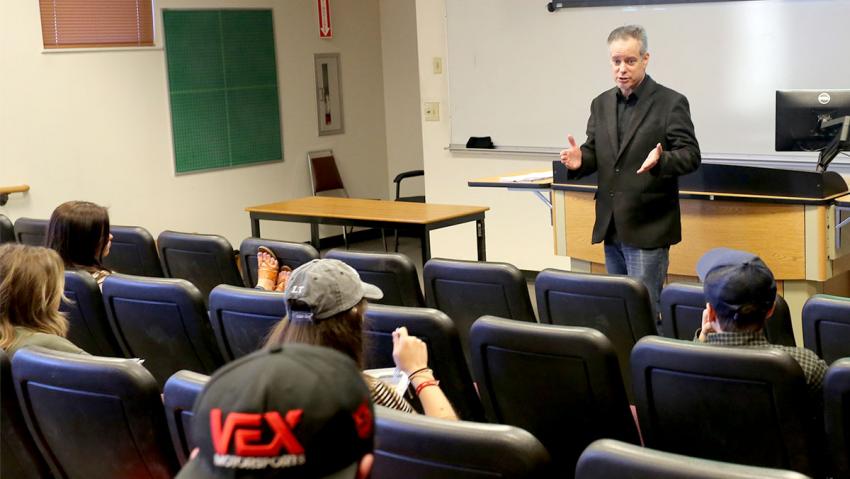 A meeting with TMCC Speech Communications Instructor Rick Bullis is guaranteed to cover the gamut of possible topics—everything from interesting career paths to the value of conversations in your local grocery-store. That, he insists, is the beauty of communications: instead of narrowing choices or perspectives, communications is a degree that can open doors.  And it’s extremely relevant to the challenges students face in a world that is increasingly virtual and impersonal. In any case, it’s worth talking about when, by and large, people are talking face-to-face much less than they used to.

“There’s a lot more anxiety about communication for this generation of students,” Bullis said.

In a world where people feel disconnected and isolated and social media is a way of life, the study of communication is not only a smart career choice, but it’s also one that’s connected to your own mental, emotional and social wellbeing.

According to a recent  study published by BMC Psychiatry, 23% of 42,000 young people are addicted to their cell phones in the same  way—and with the same physiological responses—as addicts. This has to do with increased screen time, which stands in for face-to-face communication.

“This is a statistic that was released in a study last year,” he said. “By the time I turned 18 in the 1980s, I had experienced twice the amount of interpersonal practice, interpersonal connection and one-on-one conversations as 18-year-olds do today. Even though they are technically communicating more (online and particularly on social media platforms), they are missing  human contact—that actual touch or warmth you only feel when you communicate with someone face-to-face. So they need even more practice, interpersonally, especially for their careers.”

Bullis describes his journey to the speech communications classroom as “pretty complicated.”

Because he “always loved theater” and describes himself as a “theater kid” Bullis pursued both a Master’s and a Ph.D. in theater. However, as his first real teaching position in higher education  was, as Bullis describes “a half-English and half-theater instructor”— a role that changed the trajectory of Bullis’ professional career when his department chair offered him an opportunity to teach a class in public speaking.

“And I loved it. I loved it even more than teaching theater.”

That experience stayed with Bullis, even well into his career as a tenure-track faculty in the theater department at College of the Siskous in Northern California. When he was asked to participate on a hiring committee for a communications faculty, “...I was just blown away by all the cool things communication scholars  were studying,” he said.

The research topics Bullis read about inspired him to make a drastic change: he applied and was accepted to Chico State’s Graduate Program in Communications. “I quit a secure, tenured position and started my life over again,” he said. “I rented an apartment in Chico and went to graduate school. It was the best decision I have ever made.”

If you think a communications class is like a debate club, you’re wrong.  Originally, communications was classified as a type of rhetorical study, where rhetoric is the art of persuasion.  In the 1980s and 1990s, the discipline of communications shifted and began to resemble other social sciences like anthropology, sociology, and psychology in its use of research and applied methodologies.

“I learned a ton about social science process, methodologies, qualitative and quantitative studies, and different measurement tools. Then I started realizing how valuable all these theories are,” Bullis said. “Communication theories are unique because they sound like ideas you may have had yourself, but they are validated over several years of research and hundreds of thousands, if not millions, of people who have been the subject of all this study.”

Communications studies reveal statistical truths not only about what we say but the impact of our words on our relationships with ourselves and others. These can lead to surprising insights. Bullis cites one theory that explains the element that keeps romantic relationships from disintegrating. Spoiler alert: it’s not love.

“The Beatles have been telling us that ‘all you need is love.’ Yet, the theory has proven again and again...that the number one thing that keeps a marriage together is respect. (So Aretha Franklin has been giving better relationship advice!) The second most important thing—is also not love. Communication is second. Of course, love factors into those things, but you can love somebody and not respect them. And you can respect someone and not love them. Respect ranks higher, in the end.”

With insights that can improve all sorts of relationships, it’s no wonder that communications is currently one of the most useful degrees you can get. It’s also one of the most highly ranked. In fact, The Princeton Review ranked communications as the second most useful degree for undergraduate students because it delivers hefty doses of skills employers are looking for in their newly hired professionals, including: communication, teamwork, and analytical thinking.

The degree is universally applicable, said Bullis, who cites examples of its usefulness for running a PR firm that campaigns for better healthcare to acting as a sports agent for professional athletes, to starting and promoting your own business.

“Studying communication opens so many doors, perhaps all your options can become dizzying. Think of what you would be in whatever career you want to pursue if you don’t have communication skills,” he said.

Bullis cites another statistic he has come across in his research to support this point. Even medical doctors have to use communication skills in their careers. And if they don’t, they have serious consequences. According to a recent study, approximately 90% of doctors who are sued for malpractice are the ones who are also reported as bad communicators.

The skills students learn in a communications class are applicable at the workplace, at home, in personal relationships and...even at the grocery store. Bullis, who has been in northern Nevada for quite some time, recognizes the value of finding connections to those around you.

“I participate quite a bit in the community, especially with the TMCC community. I love all the people that I’ve met and gotten to know here. I do some outreach stuff— I’ve spoken to different groups like Rotary or Kiwanis… but as it correlates to students, you can’t have a sense of community without communication,” he said.

This is a difficult thing to possess in a world driven by impersonal communications like email or text—but interacting in the community can be a useful reminder of all the ways we are connected. “That’s one of the things we teach in communications: it’s all about your connections to other people. This is actually a communications theory that stemmed from sociology, which is called ‘uncertainty avoidance’ and ‘uncertainty reduction.’ Even if I only know two things about you, my uncertainty about you, and therefore my anxiety of talking to you, is vastly reduced.”

For example, if you know someone is a fan of a particular sports team, you can always strike up a conversation with them by asking them about the latest game. Or, if you know someone is a gardener, asking them for advice on the proper time to plant tomatoes can be a less stressful way to start talking to them. Bullis said that this can also be a way that you can build connections to those you see in your day-to-day life.

“I know all the managers, clerks, bag boys and the people who stock the shelves at the grocery store I always shop at because I know a couple of things about each of them,” said Bullis. “And so I’ll always bring up something about each of them. For example, the guy who stocks the yogurt—if I see him, I’ll bring up something silly like: ‘I was curious: are there any new yogurt flavors I should try?’ And he’ll be surprised I asked— and recommend some new almond mocha flavor.  So, it’s a positive interaction for both of us: he got to tell me something I didn’t know, and I got a great recommendation for a yogurt flavor. It’s just things like that—the minor connections— that end up growing into relationships.”

In a world where people can feel disconnected, the ability to communicate is vital, especially for students. Bullis encourages students to foster and develop connections to the people in the real world as well as the virtual world.  That kind of communication is key for everyone and is the best part about his job.

“Everyone always says this, but for me, it’s very true: my favorite thing is teaching classes and having office hours,” he said. “Like today, I had four students in my office and we were talking about all sorts of things from tattoos to communication theory to music and how it all fits together.”

For more information about studying Speech Communications at TMCC, contact the Humanities department at  775-674-7945.