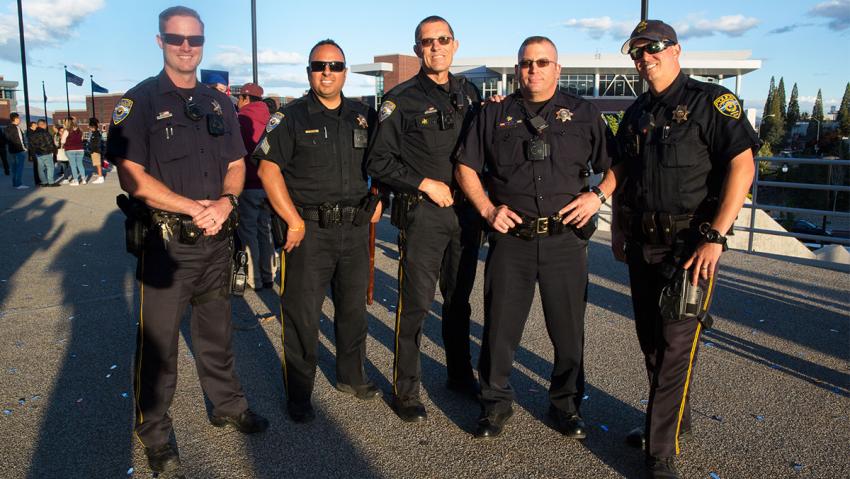 It’s roughly 10:40 a.m. on a Monday at the Dandini Campus and Officer Jeff Aguilera watches the flow of traffic on Raggio Parkway from his official patrol vehicle. This is one of the peak traffic times when students and staff are arriving for their late morning class or leaving to return home.  He has pulled into a spot near the overflow parking South of the Vista Building, which is beginning to fill with cars.

“It’s not about handing out tickets,” he said. “I’m here to help people to correct their behavior and to get everyone to school, their office or home safely.”  The posted speed limit on Raggio Parkway is 25 mph. The road received an upgrade in its signage last year thanks to a grant that flashes a “slow down” message if you pass it exceeding the limit. Yet, speeding still happens.

“It’s important to keep drivers mindful—there’s a crosswalk and you never know when you’re going to be the person using it,” he said. Most people check themselves and slow down, especially when they see the University Police Services logo on the patrol vehicle. And just then, a student  driving a black sedan passes noticeably faster than the other vehicles.

As we pull into traffic, Aguilera explains that he knows what significantly exceeding the speed limit looks like—and that was definitely it. He’s not going to hand out a ticket this time, but instead give the student a verbal warning... this time.

Just being visible is a large part of what University Police Services does— an articulation of safety to students, faculty and staff— although it is a fully functioning law agency, just like the police departments in Reno or Sparks. The radio in Aguilera’s vehicle sounds a constant reminder of this; University Police Services shares a regional dispatch with Reno Police and the Washoe County Sheriff’s Office, and as Officer Aguilera continues to monitor traffic, messages of reported crimes across our community and the calls of officers who are responding to them fills the car.

Is the TMCC Campus Safe?

No matter if you’re a student, teaching faculty or staff, you might have wondered about the place where you spend the majority of your waking hours. How safe is TMCC... really? According to Assistant Vice President of University Police Services Todd Renwick, no matter which NSHE campus you’re visiting in Northern Nevada, the numbers show that these campuses are safe places.

“Instances of violent crime are extremely low,” he said. “Most of the crimes we see are property crimes—it’s typically someone’s purse, computer or bike being stolen. There’s nothing that shows us that there’s any reason to experience fear while you’re on campus.”

According to the Annual Security Report published by University Police Services, burglaries were the most common crime in 2016–2018 for TMCC’s Dandini Campus, with five instances reported.  Reports of motor vehicle theft, stalking, drug violation arrests, and robbery follow, have been reported no more than three times since 2016. There has never been a hate crime reported, nor any violent crimes

Yet, part of the strategy of University Police is to maintain a visible presence on TMCC’s Dandini Campus and other locations at all times. This sends the message that the campus is a safe place to students and staff and to deter possible criminal acts from occurring. Attention has been placed on officer visibility and presence after the recent restructuring of the department, which streamlined the department for institutions in the Northern and Southern regions of the state. “This structure provides better services to all campuses and affords anybody to have access to police,” said Renwick, who wants to make sure that students and staff know that officers are on campus to help them, if needed.

Under the new department structure, two of the three districts within the Northern region serve TMCC and its various locations. The North District—at the TMCC substation—serves DRI, TMCC Dandini and various Stead properties. The South District serves the Applied Technologies Center, Meadowood Center, and Redfield.

Officer Aguilera, who’s stationed in the North District, begins his day by walking the Dandini Campus, looking for anything unusual or out of place. He visits key TMCC departments as a part of this initial tour of campus. He also makes sure to walk the halls of each campus building.

At one point, a student comments that: “There must be twenty of you—I just saw you over there!” as Aguilera passes him in the hall.

“That’s what we want people to feel—we want students and staff to know that we’re here,” said Aguilera. “I also make sure to check in with other departments on campus so they can get to know me and the other officers. We don’t want anyone to hesitate to reach out to us if they need to.”

Although TMCC is a safe place, it’s important to know how, when and why to contact University Police Services.  If you’ve witnessed a crime or have something to report that is not an emergency, call 775-334-2677 (COPS). For emergencies, no matter where you are, you should always call 9-1-1.

“I would really like for students, faculty, and staff to feel comfortable reaching out to Police Services—we are here to help,” said Renwick. If you’re wondering whether or not you should call, Renwick offers the old adage: if you see something, then say something. “If we don’t know about whatever happened to you, or whatever you saw, we can’t help you,” he said.

Calling is the most efficient way to report a crime; whether you’re reporting an emergency or another kind of crime, doing so in a timely manner with as much information as you have can make a difference in stopping a criminal from repeating criminal acts, or (in the case of theft) can increase the likelihood that your stolen property can be located and returned to you.

While there are more bikes stolen from UNR’s main campus than TMCC’s Dandini Campus, Renwick nonetheless encourages students, faculty, and staff to take the time to gather photographic evidence of their valuable property. This can mean taking pictures of serial numbers on your property (in the case of a bicycle, phone or laptop) and pictures that show any defining characteristics, such as its color, sticks, decals, etc. This helps to identify the item when it turns up in online sales venues like Craigslist or Facebook Marketplace, or in local pawn shops.

Renwick, who said that the most frequent kind of crime is one inspired by convenience, cautions students and staff about trusting others too much. “Never leave your bag or purse unattended if you’re leaving to go to the restroom,” he said. For faculty and staff, Renwick cautions about leaving office doors open and unlocked even if you’re “just going down the hall.” Crimes of opportunity only take a few minutes at most; closing and locking doors, locking up valuables and/or leaving them at home if they are not absolutely necessary are all great strategies for avoiding theft.

If something happens (and it’s not an emergency), however, follow the advice of Chief Renwick and Officer Aguilera: contact University Police Services right away to file a report.

Coffee with a Cop

If you’ve never spoken with the University Police officers assigned to the TMCC substation and you like coffee and donuts, stop by the Student Center on the Dandini Campus on March 10 at 11 a.m. - 1 p.m. Meet the officers and learn first hand about campus safety.