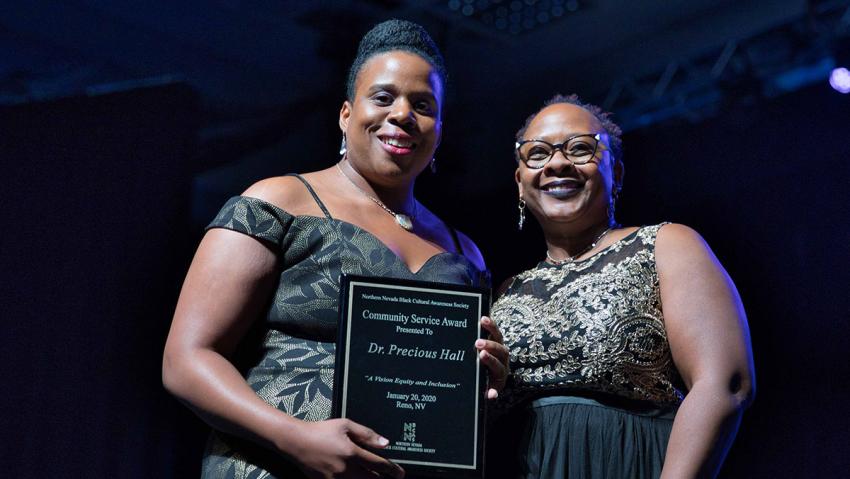 Recently, Dr. Precious Hall was honored by the Northern Nevada Black Cultural Awareness Society (NNBCAS) with a Community Service Award for the work that she has done for the TMCC Community. Dr. Hall received the award at the annual Martin Luther King, Jr. Celebration Dinner, an annual event for which TMCC is a corporate sponsor.

Hall has attended the event for 6 years along with other members of TMCC Leadership and the Equity, Inclusion and Sustainability office. She was nominated for the Community Service Award by Equity, Inclusion and Sustainability Program Director YeVonne Allen, who cited Hall’s many roles—both at TMCC and in the community—as reasons for her nomination.

In addition to her role as a tenured Professor of Political Science, Hall has contributed to the services offered to TMCC students. Since the Fall of 2013, she has served as the TMCC Foster Youth Liaison, connecting current and potential Foster Youth to ensure student success and retention. She has also served as a TMCC Diversity Advocate, serving as an Ombudsman for underrepresented populations.

More recently, Hall has been instrumental in assisting foster youth through programming made possible by the ARISE Grant that was given to TMCC by The Giving Circle. The grant’s intent is to help vulnerable young adults to access support and resources to continue their education and meet personal and professional goals.

According to Joan Steinman, Executive Director of Retention and Support programs, even though there are resources available to students in need of them, knowing how to access them is the challenge. “Dr. Hall helps these students navigate college processes, she checks up on them and refers them to resources they may need to reduce barriers to getting their education,” Steinman said.

Hall has also served on the Student Resources Committee, which created the Wizard's Warehouse food pantries on three of our campuses, and an emergency scholarship program. “These projects help students with life challenges so they can focus on their studies and academic success,” said Steinman.

Hall also helped to create the Faculty of Color Coalition committee on campus, which seeks to create a greater sense of community and mutual support among faculty and staff of color through mentoring and networking. Most recently, the Coalition organized and hosted the Spartan Pledge event in support of students and staff who are veterans.

In addition to her dedication and commitment to TMCC students, Hall volunteers for events and programs with Washoe County School District and other organizations, such as the Reno Bike Project, where she is a member of the Board of Directors.

“She is such a deserving recipient, an inspiration and a force for good in the world,” said Steinman. “I am thrilled for her.” 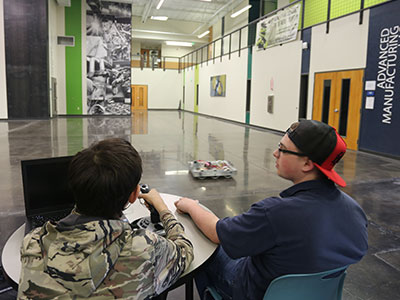 What has six wheels, a long arm and is programmed using java? It’s the ACE/TMCC Robot, a creation of the inaugural ACE/TMCC Robotics Team. Thanks to a generous sponsorship by Tesla, Machining Instructor Laure’L Santos is acting as mentor and coach to twelve ACE High School students who are building a robot to compete in the International FIRST Robotics “INFINITE RECHARGE” Competition that will be held at UC Davis March 26-28.

The FIRST Robotics Competition is an international competition for high school students. Each year, teams are given six weeks to build a robot that will meet specific challenges. According to the competition’s “reveal video,” which was posted on January 6, the Star Wars-themed “INFINITE RECHARGE” will task robots to collect, transport and throw rubber balls, spin a wheel a certain number of times, latch onto a bar six feet above the ground and to lift itself off the ground.

“The first fifteen seconds of the competition is when the robot is in autonomous mode—that basically means that the robot has to move and perform tasks on its own,” said Santos. “The more your robot does, the more points it gets.” This is followed by two minutes and fifteen seconds of competition when the robot is manned by two “drivers” on the team who will complete the rest of the competition. The TMCC/ACE team is registered for six competitions so far that will pit them against 60 other teams who are also participating.

TMCC’s Robotics team is one of two in Northern Nevada, and as a new team they face specific challenges. Key among them: how to build a working robot from scratch.  Although the robot’s chassis arrived as a “kit” from FIRST Robotics, everything else has been designed, manufactured and built by the students, including the internal programming that robot will rely on for the first fifteen seconds of the competition.

“We use Java to program it. The students have programmed everything from scratch. All of it we’ve basically built from scratch, we’ve had little outside help,” said Santos, who admits the challenge has been formidable, but the students are loving every minute of it. Team FYRE, the other Northern Nevada team, has also been a great resource and mentor for the ACE/TMCC team.

In the remaining weeks leading up to the competition, The Hub in the Applied Technologies Center will be transformed into a miniature obstacle course, mimicking the course the TMCC robot will face at UC Davis. Another playing field, complete with all the necessary field elements, is located in Downtown Reno near the Discovery Center.

After the competition ends, Santos said the real journey for the Robotics Team begins: to find sponsors that will help perpetuate this program that teaches young students hands-on programming and machining skills with a good dose of fun.

For more information about TMCC’s Robotics Team, contact the Applied Technologies Department at 775-856-5300.