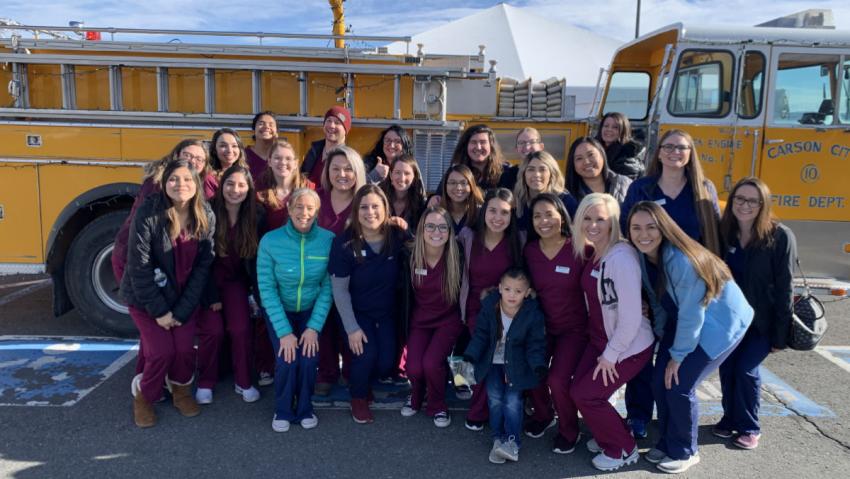 This winter, TMCC dental hygiene students helped a veteran in need, and he wasn’t in a dental chair. Instead, veteran Mitch Mendler had planned on displaying the American flag in Carson City for a special ceremony, but as he arrived in the capital city, he received notice that plans had been changed and that the volunteers who were scheduled to help him were not available.

Mendler had just returned from a 10-day tour with the American flag that ended in Bastogne, Belgium in our of the 75th Anniversary of the Battle of the Bulge. Mender along with his father and other World War II veterans performed a memorial for the battle.

“We were in Malmedy on the morning of the 17th where 84 U.S. soldiers were killed by the SS Nazi German army,” said Mendler. “We displayed the flag at the memorial and traveled to the airport for the marathon trip home.” The plan was for Mendler to perform a similar memorial in Carson City at the state capital the following day. It was a plan that almost didn’t come to fruition if it hadn’t been for TMCC Dental Hygiene students. 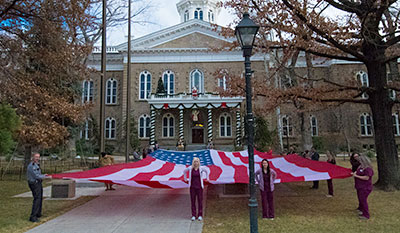 “I almost canceled my plane flight to Reno and thought about going home and making another attempt to visit Carson City in the future,” said Mendler. However, a friend and WWII veteran that he’d met on the trip told Mendler to go to Carson City regardless, counseling him that finding volunteers for that sort of patriotic event wouldn’t be a problem.

When Mendler arrived in Carson City the day the event, he struggled to find volunteers to help him display the flag. Then,  he encountered TMCC Dental Hygiene students.

“I asked some students to help from the Truckee Meadows Community College dental hygiene program. It only took one minute to get them on board with the program… they helped with overwhelming excitement,” he said. “If it was not for their help, the flag would not have been displayed.”

Mendler’s sentiments bring to mind words by American Cultural Anthropologist Margaret Mead who said: “Never doubt that a small group of thoughtful, committed citizens can change the world. Indeed, it’s the only thing that ever does.”

For more information about the TMCC Dental Hygiene Program, contact the department at 775-673-8247.

Recently, TMCC student Kealii Kalawao Cummings was appointed to Governor Sisolak’s Veteran’s Services Commission. Cummings— who met with the commission on Jan. 9—said he’s looking forward to working with other members of the commission to increase awareness of suicide prevention and other support services for Nevada’s veterans. Cummings’ particular role is to serve as the voice for all student veterans across the state.  “We’re working on a lot of projects,” said Cummings. “We want to draw attention to the problems veterans have accessing services in Nevada. The end goal is to make everything a little easier for our veterans.”

The Commission is staffed with those selected by the Governor for their expertise of knowledge and experience, and who can provide unique insight into solutions to the problems faced by veterans. “We also vote on initiatives like Nevada’s Veteran of the Month and the Veteran Supporter of the Month—and we address past and future events,” said Cummings. “I’m responsible for bringing information on events or concerns regarding student Veterans in Nevada.”

Cummings, who is completing a work-study at the Veterans Resource Center on the Dandini Campus, served for four years in the U.S. Marine Corps as a Mortarman before coming to TMCC. He just completed his second semester in the business program and plans to continue his education at UNR to receive a bachelor’s degree. His end-goal? “I’d love to own my own business one day—possibly a gym,” said Cummings, who in addition to being a veteran, full-time student and serving on the Governor’s Veteran Services Commission, is a competitive powerlifter and Strongman.

Yet, Cummings insists that knowing what supports are available and having the confidence to ask for them are key to a veteran’s ability to succeed in society. “It’s important to seek help because the transition process is difficult and sometimes confusing,” Cummings said. “And then going back to school is a whole other beast. Touching base with resources like TMCC’s VRC or contacting the local VA are a great starting place for veterans who are seeking help.”