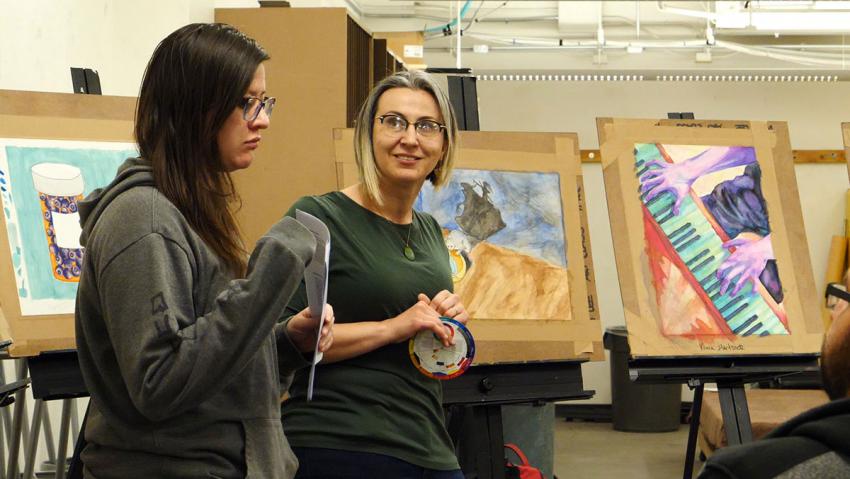 Some say that art is one of the practices in life that, if you do it over and over again, you will get better at it. There’s a cyclical logic to that, a continual return that invites a discussion about the places we’ve been, and where we are going. This discussion is something that TMCC Art Instructor and Program Coordinator Rossitza Todorova engages in as both an artist and an educator.

Todorova, who began teaching at TMCC in 2018, began her journey looking at the business—and not the creative—side of art. After completing a BFA from UNR and minor in business in 2005, she worked in arts administration for the Nevada Arts Council. It wasn’t until 2010 when a Master of Fine Arts program put her in a classroom that she discovered a love of teaching. “A lot of college students—they just need a guide,” she said. “That’s how I see my role. I’m there to guide them through the skills I know I can teach them. They will do the rest.”

Todorova recognizes the struggle that young (and arguably, all) artists face: whether a person can be an artist and only an artist. Yet, the porous line between student and teacher in the world of art—which considers us all practitioners—is where Todorova has found her answer. The meaning in art—as in life— resides in the process itself, in something cyclical, like change.

Art as an Expression of Places, Motion and Time

Todorova’s art—which can be described as geometric—is an expression of three elemental ways we measure experience: “...The work itself is about the place, movement and time and how we experience those three things at the same time,” she said. In a series of lithographs titled “Intersections,” her work does exactly this: compressing place, time and movement into a single image. Lines swoop and intersect, while colors inform the compressed landscape, gesturing to the undeveloped or urban spaces through which the artist traveled, recognizable only by its placename. 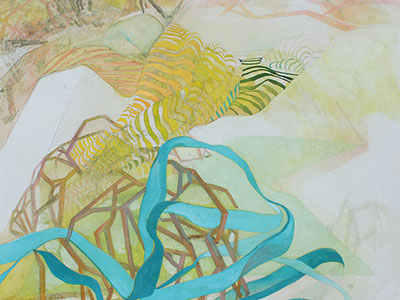 “One of my favorite examples for explaining my art is: imagine yourself standing at your door leaving home today. And then, think about what it took to get to wherever you were going. If you were to compress that time period, what would that look like in a single image? So within that image, if you were to imagine that whole experience as one—you would have a sense of place (what the landscape around you feels like), a sense of movement (driving, biking, walking—however you got to campus) and the passage of time (the amount of time it takes to get from one place to another.”

The work that results from this kind of thinking is varied. One series called “Handmade Books” literally began in the passenger seat of a car on one of many daily commutes where she started drawing her impressions of the passing landscape.  “I was really interested in these manmade spaces, so I started to build them,” she said. 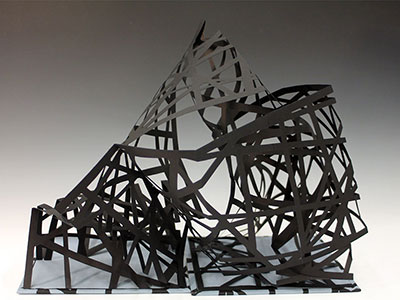 “Handmade Books” utilizes Japanese hidden binding, paper-wrapped covers, cut paper in modified accordion patterns paired with modified double origami into an object that is two-dimensional (like a book) when it is folded up, but as it unfolds, it’s nothing short of surprising. It’s a colorful and unexpected object—something like a geometric jellyfish or what it would look like if you let a length of ribbon dance and unravel in a tornado—a spiral of unfurling color and line. Yet, even that description misses it: it’s structural, like architecture, yet impermanent because it is constructed of paper.

“I created something that could expand and collapse, that reinforced the themes that I was thinking about in my work,” she said. “This idea of travel of getting in the car, this process of collapsing space that happens mentally when you’re traveling—you’re in yourself and you’re also in this space and there’s something that opens and shrinks when you notice what’s around you, or what you are thinking about.”

Although the inspiration for her work remains constant (as does her “vocabulary” of geometric shapes and gridded lines) her art takes many forms: sometimes drawings, sculptures, installations, video or live performance. Immersive art (or art as experience) is what Todorova creates: “That process of entering and walking through, and having a different view every time you enter that space is really important,” she said.

“Distance is Measured in Time,” an exhibition that was shown in the TMCC Gallery in 2018, featured a two-channel video projection of an ambiguous road space that showed something that was spinning away from the viewer and out of control. This video was projected through a sculpture that was also turning but in the opposite direction. “And so, the view through the sculpture affected the video and all the movement was going in a slightly different direction,” said Todorova. “The entire piece was about an experience of visual and physical movement.” It was a landscape without reference points, or a study of perspective without a horizon line, a play of light and shadow in constant flux and change.

Compression and expansion (or is it de/re-construction?) of time and place; these are interesting preoccupations, knowing something of Todorova’s history: born in Sofia, Bulgaria, Todorova moved to Reno when she was ten. “I think that coming from a small eastern European country that is very green and full of history and then coming here in the middle of the desert with naked hills and open vistas was shocking—but also influential,” she said.

“Art is solitary, but it doesn’t have to be.”

Todorova defies the stereotypical image of the artist, locked away in a studio. Her work invites audience participation and her public works—on display on street corners in Reno and Scottsdale, Arizona—suggest an artist whose work wants to be a part of the world.  In 2015, an opportunity surfaced for Todorova to create an installation in one of Phoenix’s “Hot Box” galleries.  These spaces are 8-feet by 14-feet shipping containers that literally open to the street, so there is no “barrier” of a door keeping the public from entering. “That process of taking away the door really allowed people to just walk in,” said  Todorova. 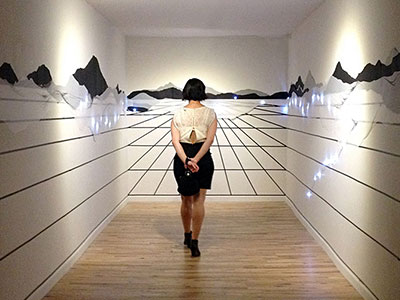 Her piece, (called "Prospecting") was a one-point perspective drawing with grid lines made of tape and mountains constructed of paper lined with glittering lights that enabled viewers to feel as though they were walking into a new landscape. “It was really about the idea of prospecting and how we grid our spaces, grid our cities and find value and want to take value out of the land that I wanted to convey,” said Todorova, who was fascinated by the reactions of those who came to view her art—and who were surprised by how much it changed as you moved through the space.

“Part of the push-and-pull of the artwork is that from far away it looked like this landscape you could enter, with the glittering lights of those things we want to take from the land,” said Todorova. “Yet, when you got close to it, you realized it was made out of paper. So there’s this process of this landscape falling apart as you experienced it, so that you had this dream and desire and then you got it, and it wasn’t enough—like the dream of the West that’s unattainable and unrealistic.” 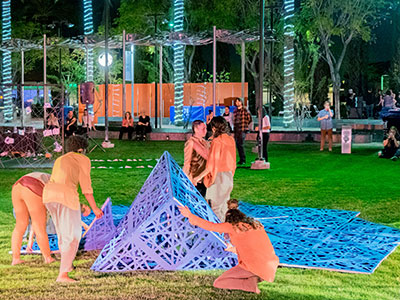 In addition to creating very immersive experiences in public places, another way Todorova finds ongoing engagement with the community is through collaborative projects with other artists.   In March 2017, she collaborated with Musician Chaszmier Tyler and Choreographer Jenny Gerena to create Roda Viva.  The performance piece, which was performed at for the Mesa Spark! Festival of Creativity, explores the way that “life is in the round... everything is circular, everything is connected and that life stays in this idea of being in the round.” Dancers manipulated collapsable sculptures that Todorova created especially for the performance that unscored this idea of organic, circular connections made visible by this moveable geometric shapes.

“It’s so important to collaborate with other art forms because then you have a completely different appreciation for how they plan things, how they are executed, and what kind of repetition in movement they make,” she said. This insight informs Todorova’s work both in the studio and in the classroom. Her expression of movement through video and installation pieces that, like a dance, insist on the viewer’s participation and ephemeral qualities of lived experience, like time and light. So too, her work with students: showing them that fine art is a part of many industries and worlds.

At TMCC, Todorova works to give her students experiences that echo the world of art outside of the relative safety of the studio. Through the TMCC Art Club, Todorova introduces students to the various facets of the profession, whether through informational workshops that teach important skills—like how to hang your work—to taking students on tours of local organizations involved in the fine arts. “We’ve been doing a lot of workshops, learning new skills, taking tours, talking to people in the industry, and showing students what other resources are in town. I feel really lucky to be able to do that because people here are so accessible—so I can take students and introduce them to real people they can work with.”

These experiences also enable Todorova to “flip the teaching script”—to teach students skills that they can, in turn, teach to others. “How is an exhibition put together?  How do you run an art opening?  How do you run a workshop?” Through workshop, exhibition and curation opportunities, Todorova can hand the reins to her students, so they can experience 360-degrees of the profession.

“We can think of our students as young, but they are really just our peers,” said Todorova, remembering one of her first students from 2010. “I watched him graduate with his BFA, I wrote him a recommendation for his first job and I got to see him do an Artist’s Residency in India. Right now, he’s in the process of applying for MFA programs—and it’s just the process of seeing that whole arc of someone who began learning basic skills, who went on to teach art, and who’s investing in himself and thinking of how to continue in graduate school.”

It is an echo, perhaps, of a similar struggle Todorova once faced: how do you let yourself be an artist first? It’s a discussion that is similar to those that happen in the classroom, where a student’s transformation across the time of a semester or a degree program makes a statement about the environment of higher education and the journey it inspires.

“I respect students a lot. They have a lot to say, and they have a lot that they can, themselves, teach. They aren’t just students, but people who are about to be my peers,” Todorova said.  “I just have a little bit more to show at the moment, but they will have something to teach me later.” 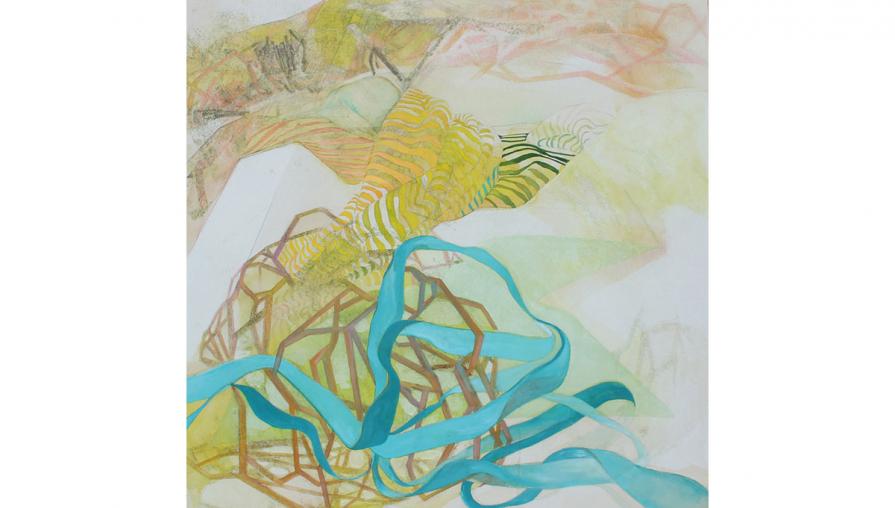 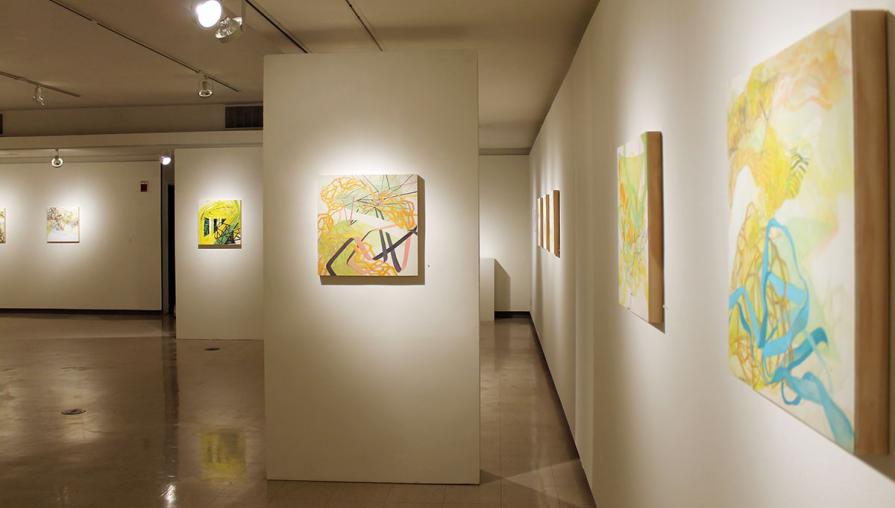 "Holding the Path", a piece that explores the sense of moving through space and the passage of time. 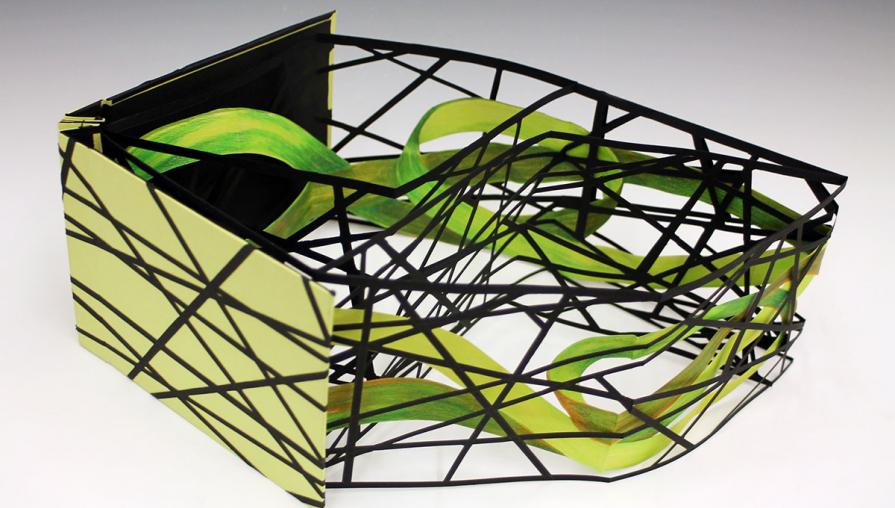 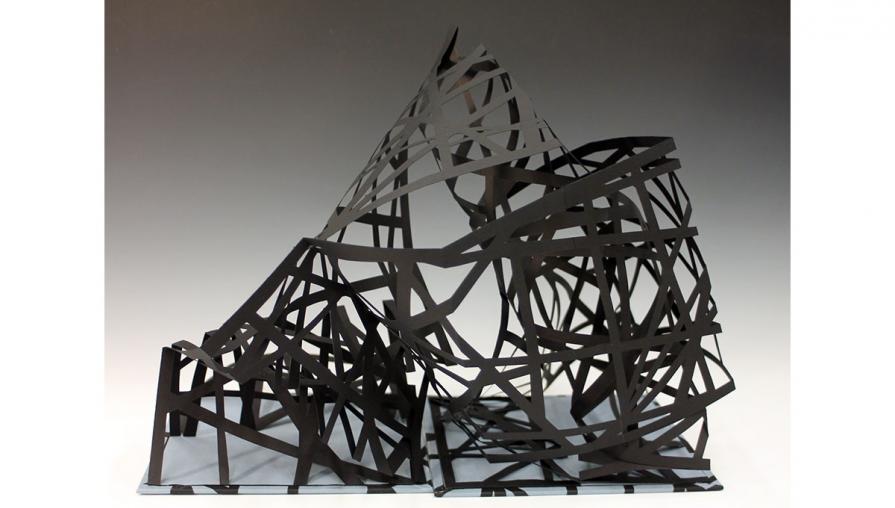 “I created something that could expand and collapse, that reinforced the themes that I was thinking about in my work,” Todorova said. Pictured is another piece from "Handmade Books." 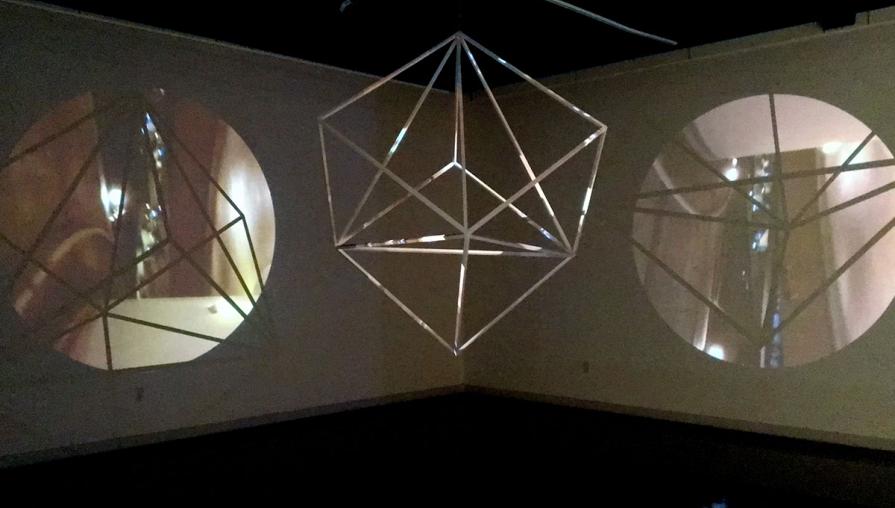 "Distance Measured in Time," an exhibition that was shown in the TMCC Gallery in 2018 that articulates the experience of visual and physical movement. 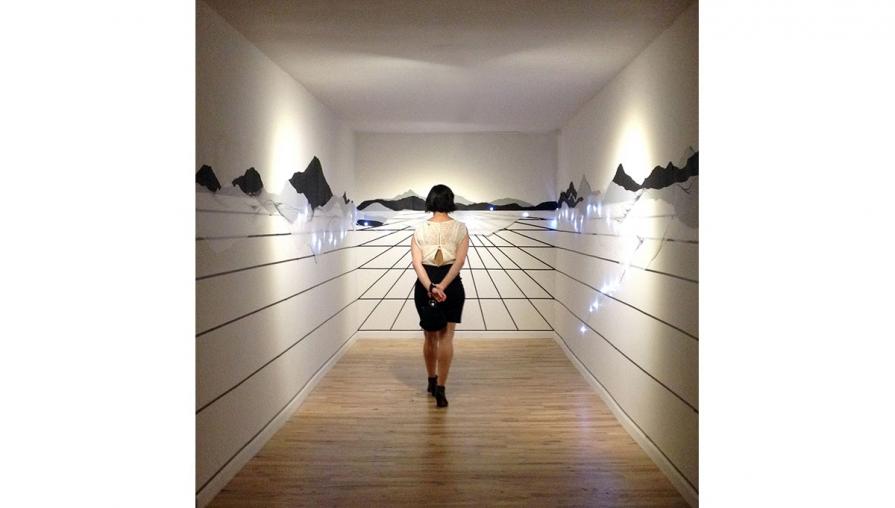 Todorova walking through her installation "Prospecting", a one-point perspective with grid lights that displayed in one of Phoenix's "Hot Box" galleries. 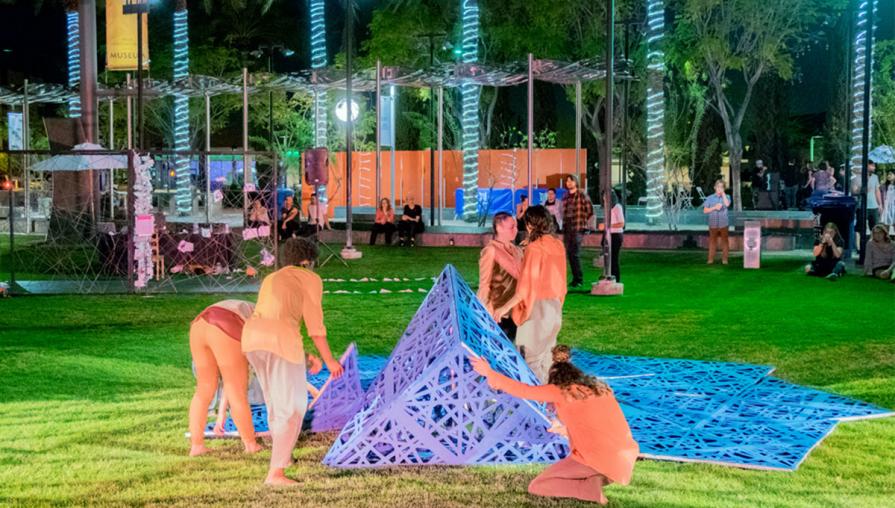 "Rova Viva," a performance piece, performed at the Mesa Spark! Festival of Creativity that explored the interconnectedness of life.