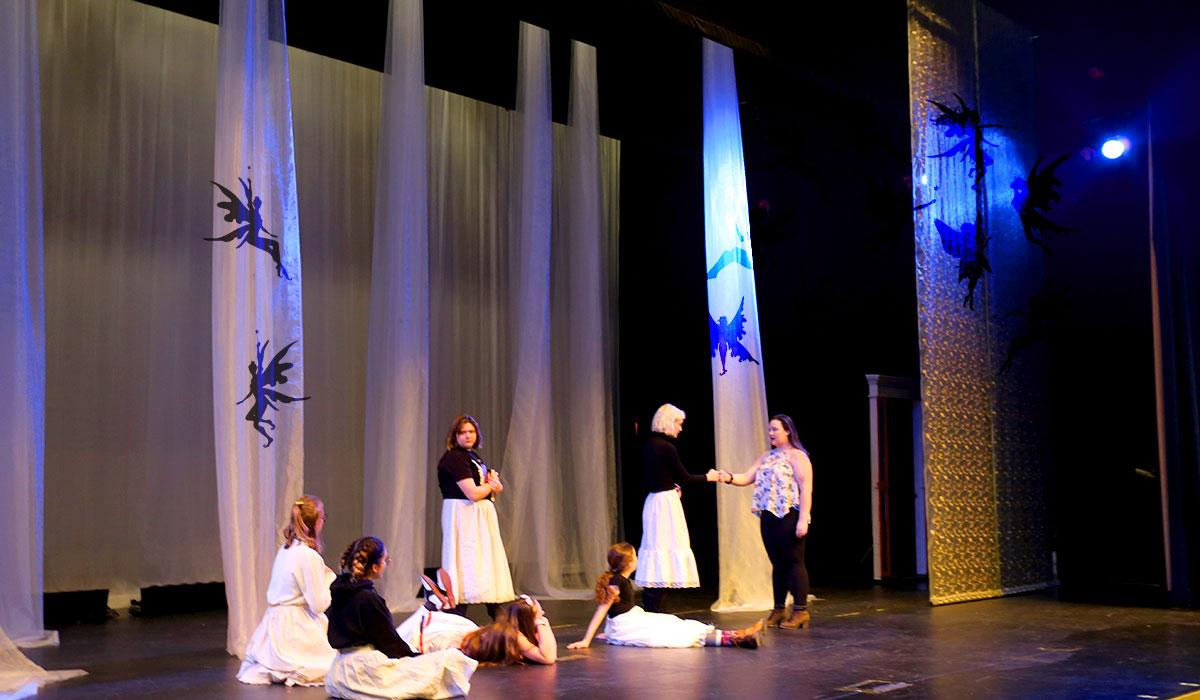 Beginning Nov. 6, TMCC Performing Arts students will take the stage with their latest collaboration with the Damonte High School Performing Arts Center for a stage production of The Light Burns Blue, a story that takes place in more than thirty locations around Cottingley and London in 1917. The production, which will feature a minimalist set and on-stage transitions between scenes, will invite audiences to consider the balance between possibility and truth, and the implications of telling an innocent lie.

“Pragmatically, it is difficult to find well written plays which feature a large cast with many roles for young women,” said Stacey Spain, TMCC Theater Instructor and Director of The Light Burns Blue. “I am interested in providing space for young actors to explore rich characters, and this play provided the perfect vehicle for this Damonte Ranch High School/TMCC Performing Arts partnership.”

The play is a part of The Platform, a series of new plays for young actors commissioned by Tonic Theatre and published by Nick Hern Books. Responding to the current lack of roles for young women in writing for young actors, all the plays in the Platform series have mainly or entirely female casts, and put young women and their stories at the heart of the action.

TMCC Performing Arts student Nica Bird, who stars as Madame Blavatsky, Mary Wood, and a soldier’s mother, sees the play commenting on a basic human need to find hope in all situations “People were broken and hurt at the time and would cling to anything that would give them a little joy,” she said. The play’s historical basis in actual events heightens the drama.  “I like that this play is based on a true story,” she said. “You don’t see a lot of plays out there based on something that actually happened. It’s been interesting to watch this production build and to see us play this history out, and watch it come alive.”

At the heart of The Light Burns Blue is the story of the “Cottingley Fairies.” In 1917, cousins Elsie Wright and Frances Griffith, sixteen and nine years old, respectively, often played together outside at their cottage in Cottingley, England. One day, they asked to borrow Elsie’s father’s camera so they could capture images of the fairies they claimed to play with by the stream that traversed the property. They returned later with “photographic evidence” that the fairies existed.

The photo shows Frances and four fairies dancing in the foreground. The girls would later take another photograph, this time of Elsie with a toddler-sized gnome. According to a 2017 article in Quartz, “It is hard to imagine the photos seeming convincing to anyone older than 12. [...yet] willingness to believe in the fairies was not a matter of intelligence or education.” Elsie’s father, who knew that Elsie had considerable artistic talent, dismissed the images as pranks. However, Polly Wright (Elsie’s mother), was convinced the fairies in the photographs were real and made them public in 1919 after attending a meeting of the local Theosophical Society.

Eventually, the photographs came to the attention of author and spiritualist Sir Arthur Conan Doyle.  “He stopped writing the Sherlock Holmes books and started going to seances and believing more seriously in spiritualism which included spirits from beyond the grave… things that couldn’t be seen in this world,” said Christopher Blumen, who plays Doyle in the production.  The Cottingley Fairies interested him and the central question that seemed to occupy everyone who saw them: in a world where World War I was possible, could fairies also be real?

“The interest in spiritualism during the First World War has been noted with the support of the likes of Arthur Conan Doyle and the famed physicist Oliver Lodge, both of whom lost sons in the trenches,” said Spain. “The Fairies of Cottingley were considered proof of realms beyond the one we see and hear on earth, if fairies were real then perhaps other things were possible too: like contacting the souls of the beloved dead.”

Doyle would use the 1917 photographs in an article on fairies that was published in 1920 by The Strand Magazine.  By 1920, the girls would take three additional photographs that the world would examine with either fervent hope or incredulity.

The story faded from public attention until 1985 when, in a televised interview, Elsie admitted that she and Frances had been too embarrassed to admit the truth: the fairies in the photographs were fake. “I never thought of it as a fraud,” Wright said. “I was just having a bit of fun and I can’t understand to this day why [everyone] was taken in—they wanted to be taken in.”

TMCC Student Leigh Schilling says that performing has always been a passion and that her role in The Light Burns Blue has been perfectly cast. Schilling plays the part of Winifred Douglas, a journalist who is determined to discover the truth about the Cottingley Fairies. “I like that [my character, Winifred] is very driven and she won’t give up until she has everything she wants and needs.” Schilling shares this drive with the character she plays: in addition to working two jobs (one of which is full-time), Schilling takes online classes at TMCC while starring in two productions this semester.

Jonathon Gastelo, who plays the part of Arthur Wright, has embraced the challenge of theater and of being a full-time student at TMCC.  For Gastelo, the theater is both his passion and his refuge. “Theater helps me. I was actually in a bit of a hardship, and I found theater to be my outlet.” Gastelo is pursuing dual degrees in Theater and Psychology at TMCC in addition to working a full-time job, but says the struggle is well with its rewards. “If you have a dream, you need to go out there and chase it,” he said.

TMCC student Sabrina Fowel, who plays the part of Polly Wright, sees the play asking important questions about the nature of what we believe and why. “In a time when Photoshop didn’t exist, would you have thought these photos were real?” she asked. “It’s interesting to think about... what you would have done and why.”

The Light Burns Blue is the first production presented through partnership with Damonte Ranch High School and TMCC. “The TMCC Jump Start Theater Production class offers college credit to Damonte Ranch High School students who perform in the cast,” said Spain. “These students attend the fine arts magnet high school for WCSD and as they are committed to the artform and work diligently to refine their craft... it has been a joy to direct them in this production. This partnership has enabled our TMCC students to work in an incredible facility with students who are dedicated and talented. Rod Hearn, who manages the theater program at Damonte Ranch, has been an amazing partner and we hope to continue this partnership in the years to come.”

For more information about TMCC Performing Arts, contact the department at 775-674-7610.