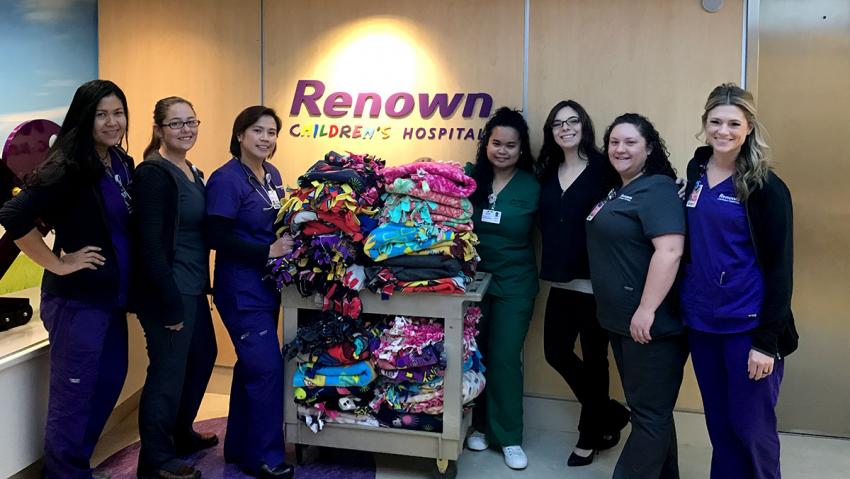 For the second year, TMCC’s Maxine S. Jacobs Student Nurses’ Association (MSJSNA) gave back to the community in a meaningful way: by making blankets for children at the Renown Children’s Hospital in Reno. “We try to do things that will benefit and help our community,” said MSJSNA member Samantha Medeiros, who was one of 14 participants who made 31 blankets in various shapes and sizes to accommodate the tiniest patient to teenagers who are also served by the children’s hospital.

The project began last semester on the heels of a successful fundraiser that enabled the MSJSNA to purchase materials and supplies for the blanket-making project. “We bought as much fabric as we could,” said Medeiros who noted that choices for the fabric were made in the spirit of both function and fun. “We had zebra print, a ‘Hey Arnold’ design, superheros, little hedgehogs and Halloween patterns,” she said.

Fourteen MSJSNA members including faculty advisor Theresa Dessert began making the blankets after an association meeting until it was clear that the meeting was running too late to continue making them all there. “We all took some fabric home, so we could continue working on the blankets on our own time,” said Medeiros. While the demands of the Nursing program aren’t exactly light, participating students “look forward to making blankets—it’s one of our favorite events to do,” said Medeiros. “We’re really motivated to give back to the community.”

On Oct. 21, the MSJSNA delivered their blankets to the hospital where the children who need them most will receive an unexpected, handmade gift. This was due, in no small part, to the effort put forth by both students and staff. “Nurse Dessert a big part of this event,” said Medeiros. “Instructor Dessert volunteers her time outside of teaching classes and working with students within the clinical setting to participate in events like the blanket making event for Renown. She’s a major aspect of our association, and our students are grateful for everything she does.”

For more information about the Maxine S. Jacobs Student Nurses’ Association or the TMCC Nursing Program, contact the department at 775-850-4054.

TMCC Jump Start student Monique McGee, a senior at Hug High School, placed third in the Road to TedX competition that was hosted at the University of Nevada, Reno.  The competition was open to all UNR, TMCC, Western Nevada College (WNC) and Washoe County School District high school students.

McGee, who is enrolled in Communication 113 (the Fundamentals of Communication) with TMCC instructor Gwen Clancy, took up the challenge of entering herself into the competition for extra credit in the class. “Monique was the only student in the three classes I teach who took up the challenge,” said Clancy, who commended McGee for not only taking the initiative to apply for the chance to participate, but who demonstrated “double courage” by speaking about a personal topic that means a lot to her.

“I’m not really into the whole talking thing,” McGee admitted, but the possibility of earning extra credit was enough motivation for her to submit application materials for the event, which included a speaker application and a video sample. “I didn’t think I would even have a chance and then I got an email that I was invited to speak at ‘The Road to TedX’.”

McGee’s talk was inspired partly by her admiration for television shows like Law & Order SVU that sympathize with victims of violent crimes. “They show the importance of victims’ rights,” she said. McGee, who was victimized, said that working on her talk has helped her through the healing process.

But, that’s not to say it wasn’t a challenge. McGee, who didn’t realize she could have notecards to assist her through her talk, memorized her presentation. This, though, is what is at the heart of any communication class, and where (as Clancy says) “...where the rubber hits the road. Communication is where theory gets tied to real-life experiences, and where students have the opportunity to push themselves beyond their comfort zones. It’s really inspiring to see.”

McGee gave her speech in front of a live audience in the Joe Crowley Student Union’s theater on UNR’s campus. Her best friend and boyfriend attended, and at key moments offered McGee their support. “When I started talking about evidence in my case, I had to put the microphone down, and I took a big breath. When I saw my best friend in the audience, he told me that ‘I got this.’” That added support propelled McGee to third place, which includes a financial prize and tickets to TedX next February.

“Everyone at the event supported each other,” said Clancy who, with several other students from McGee’s class, were there to support her. “It takes courage to stand up in front of a large auditorium, and especially share a personal story about a difficult experience, as she did. We’re all so proud of her, and she set an excellent example for her peers to take a risk.”

McGee, who will graduate with her high school diploma in June 2020, and who is looking to enroll in TMCC’s Paramedic program in the fall says the experience was definitely worth it. “It was a great experience, and I’m definitely going to put it on my resume,” she said. And while public speaking may not be her forte, she said that sharing her story will be a part of her journey as she works toward a career as a medical examiner.

For more information about TMCC’s Jump Start Program, contact the department at 775-673-8236.