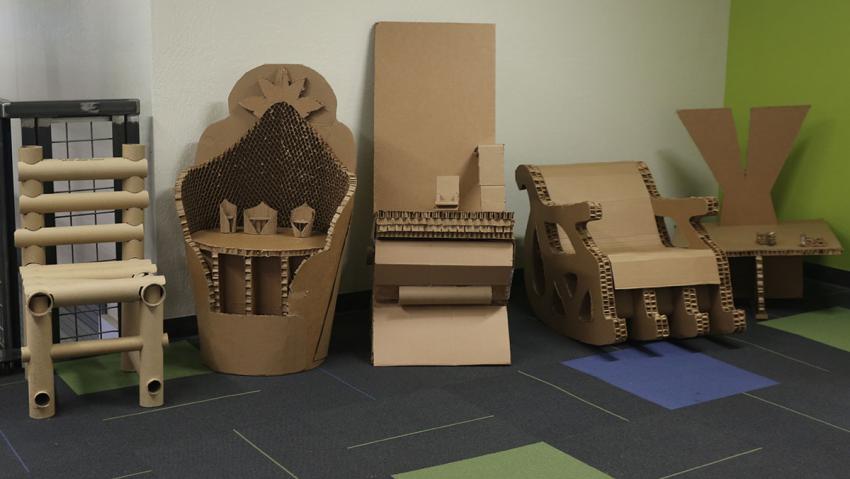 TMCC students Ryan Player and Alexander Brossard placed first and second place, respectively, in Reno’s ninth annual Design is Innovation Creativity and Energy (DICE) conference held at the Reno Art Museum on Thursday, Sep. 19.  The design competition was a part of a larger symposium that brought together creatives, artists and designers to explore the event’s theme of “REDUX”—re-imagining and re-creating ideas from the past. This theme extended to the competition which challenged participants to re-imagine the basic aluminum folding chair.

TMCC student Ryan Player’s “The Lazy Toddler” cardboard chair took first place.  Player, who is enrolled in TMCC’s Design Foundation I class as an aspiring landscape architect, had already been tasked with designing a chair from cardboard for one of four problem-solving projects in the class. Inspired by childhood memories of sitting in his father’s La-Z-Boy recliner (the overly soft kind with the wooden lever on the side) he often wished that an identical model came in child sizes.

The DICE competition enabled Player’s childhood dreams to become a reality. “I studied different models and used different folding origami shapes. All of the model chairs were recliner-like, which was inspired by my memories growing up,” said Player. Gradually, as the design evolved, so did Player’s concept: the chair grew in size and shape.

Player encountered challenges, such as making sure the chair was structurally sound as well as designing the right look and feel. Although his final design has no moving parts, the expression of a recliner—and the comfort of that sitting position—remains. The effect was a REDUX of a classic “folding” chair made from a material that, in and of itself, suggests an unexpected comfort. (And let’s be honest: who’s ever thought of reclining on cardboard?)

The Challenge of Design

TMCC Faculty Hillary Clark, who teaches the Design Foundation I class, is a past DICE winner herself and encourages students to enter these kinds of events for both the learning experience, but also as an opportunity to network with other local designers. Seeing her students succeed in the competition is exceptionally gratifying for an educator who finds particular resonance in the kind of problem-solving process design requires. “The design process is not something a lot of people get to go through. When you understand it, though, you can integrate it into other aspects of your life. It teaches you critical thinking—why we do what we do, and why every aspect of design is important,” said Clark.

Unlike previous years, Clark introduced origami folding to the class as a way to manipulate cardboard for the first time. The practice of folding the material into shapes—rather than cutting it—resonated with the students so much so that several of the students in the class based their designs on the concepts offered by origami.

Johnny Llamas, who designed his chair based on the sharp triangular shapes offered by certain kinds of origami folds, created what he calls an “Agave Chair”. It is built from triangular shapes made of cut cardboard. “The inspiration for my chair came from the Agave plant,” said Llamas. “It’s intimidating to look at, but soothing to sit in, sort of like a shot of tequila.”

Clark sees the problem-solving process of design as another form of critical expression, like writing—but that is expressed physically (for example, through the design of the cardboard chairs) or digitally, as new technologies are developed and utilized. The tangible result of design, though—and the process it takes a person to arrive at a final product—are where a kind of magic is made.

TMCC student Alexander Brossard, who placed second in the DICE competition, took a different approach to the challenge of creating a chair out of cardboard.  Instead of focusing on a specific shape or memory, Brossard wanted to keep the integrity of the cardboard intact by neither cutting nor scoring it and focused on the nature of folding chairs themselves.

“If you think about the way chairs fold—like the chairs in a stadium—they are bulky when you close them up. So, I started to think that if I could make a chair that collapses into one solid, flat piece of cardboard, that would take up less space,” said Brossard, who admits that he was “stubborn” when trying to come up with a design that had no cuts and that was made of one solid piece.

The result was a cylindrically-shaped chair that “holds more weight than you think it would,” said Brossard. “I can just about throw myself in it.”

Students from the Design Foundation I class will all have to sit in their cardboard chairs as a part of their final presentations for the class. “Every year [I assign students the cardboard chair assignment] I get something a little different. I’m always impressed by the variety of solutions I get to a problem. The limitations of cardboard produce interesting designs—and inspire the students to build great things,” said Clark.

It’s more important than a chair, though. Through the projects students complete across the semester, they are learning to translate their creativity through design that manifests itself as a physical object in space, or a digital one and sometimes as both. No matter what they create, though, it has to have one essential element: you’ve got to be able to use it.

For more information about TMCC’s Architecture and Design Department, call 775-673-7265.