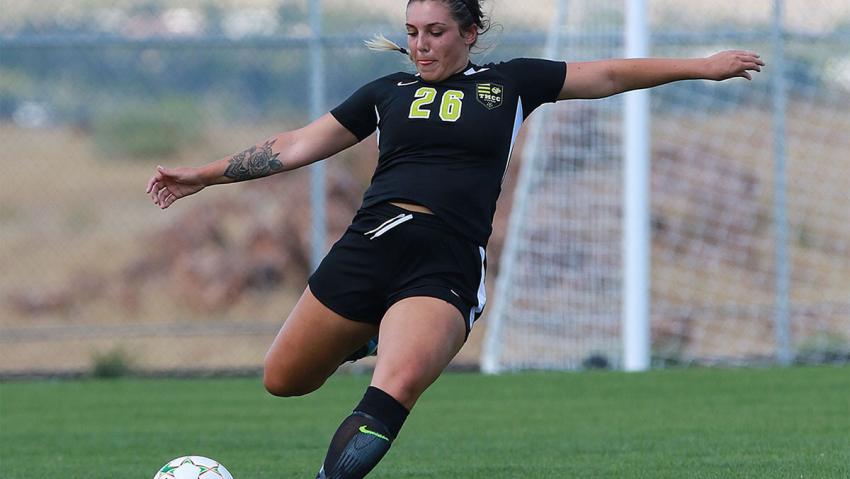 Henry Travland with Rebecca A. Eckland

Samantha Lampe’s journey to Truckee Meadows Community College has certainly been a unique one that started a few years ago when she was a senior in high school.

The McQueen High School senior was approaching graduation without any soccer scholarship offers, and was still trying to figure out her future plans. “I had played soccer my whole life, it was always a dream of mine to play on a college team, but after high school, it didn’t really feel like it was time for me to go to school yet,” she said. “I didn’t really know what I wanted to do yet. That was when I applied to a non-profit organization called Youth With a Mission.” 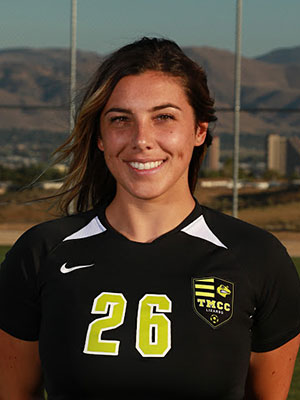 Lampe joined YWAM to improve and assert her leadership abilities and learn more about sustainability. She went to Hawaii for her training and then spent some time in the South Pacific. Several friends she had met during the training were planning on going to Haiti for more mission work.

“I really felt like my time wasn’t done there,” said Lampe. “I wanted to continue on, so I decided to take another gap year.” Haiti is the poorest nation in the western hemisphere, and since a devastating earthquake in 2010, the country is still in rough shape. Lampe went to Haiti to help contribute to her group's mission work and ended up staying for much longer than she had expected.

“I decided to go to Haiti for about two months, but ended up staying for about a year and a half. While we were there, we really focused on going into very remote places. We hiked around very rural villages, passing out water filters and also conducting a lot of leadership seminars to the people of Haiti with the goal of providing them with some structure and organization to the way that they’re living their lives.”

Lampe and other YWAM participants lived below the poverty line, spending nights without running water or electricity in order to help the local Haitians. “The friendships that I made with other foreigners and Haitian natives still stay with me, even though it’s been over a year since I left.”

When Lampe returned to Reno, she knew she was ready to start the next chapter in her life by going to college. At first, Samantha had no idea that TMCC was holding Walk-On tryouts over the summer.

“My dad actually found out about the tryouts for TMCC’s inaugural soccer program, and I started feeling like ‘Woah, this is something that could happen again’, because I really thought that once I decided to travel that no one would want to take a soccer player that hasn’t played in two years.”

Lampe hadn’t trained or participated in any soccer activity while she was away. “I was excited for the tryouts, but I really didn’t expect to make the team.”

Then, Lampe received a text message.

“When the coach told me that I made the team, everything kind of changed for me. I was very thankful, and I still am, that I got an opportunity that most people wouldn’t get if they were in my situation.”

The athletic environment at TMCC is brand new, but the school has embraced the soccer culture, as the Lizards are competing in their first year in the National Junior College Athletic Association.

“Our community as a soccer team has a lot of impact on the school and the institution’s future, I think it’s actually really beautiful how we’re getting along as a first-year program. I didn’t know anybody on the team before I joined, and it really feels like we’re a family. As the season progresses, I have seen us impacting the Reno community. We can almost serve as an example for what unity looks like, what teamwork looks like, overcoming the hardships of being a first-year program and finding common ground between everyone and how that translates to Reno as a whole.”

Lampe is truly a student first, and she takes a full load of classes. “I find that when I took 18 credits last semester I was a lot more focused and that it was a lot easier to get your work done,” she said.

Lampe hopes to go on to a four-year university to pursue a major in International Affairs and a minor in English, and eventually to go to Law School and study International Law.

With the addition of soccer, a sport Lampe has grown to love since the age of four, she sees the greater picture of how soccer connects with her other goals in life. “It’s been a huge part of my life for development, especially in decision making, because it’s a very intense sport where you have to communicate and make decisions that benefit everyone around you. I think that translates to life where you prioritize your accomplishments and visualize goals.”

Lampe also has a unique relationship with Gonzalo Lopez, the Lizard’s Goalkeeper Coach, who has coached and known her since her youth soccer days. Lopez has always had high praise for Lampe for not just her abilities on the field, but off the field as well.

“She’s a great kid, as long as I’ve known her she’s a hard worker. She’s always willing to participate and go above and beyond and mentor them. She’s a good athlete and pleasant to be around. She’s a very coachable, good kid.”

The sky's the limit for Lampe. Her main focus right now are her associate degree and helping to lead the Lizards soccer program into a successful first season, and it will be exciting to see where her future takes her.