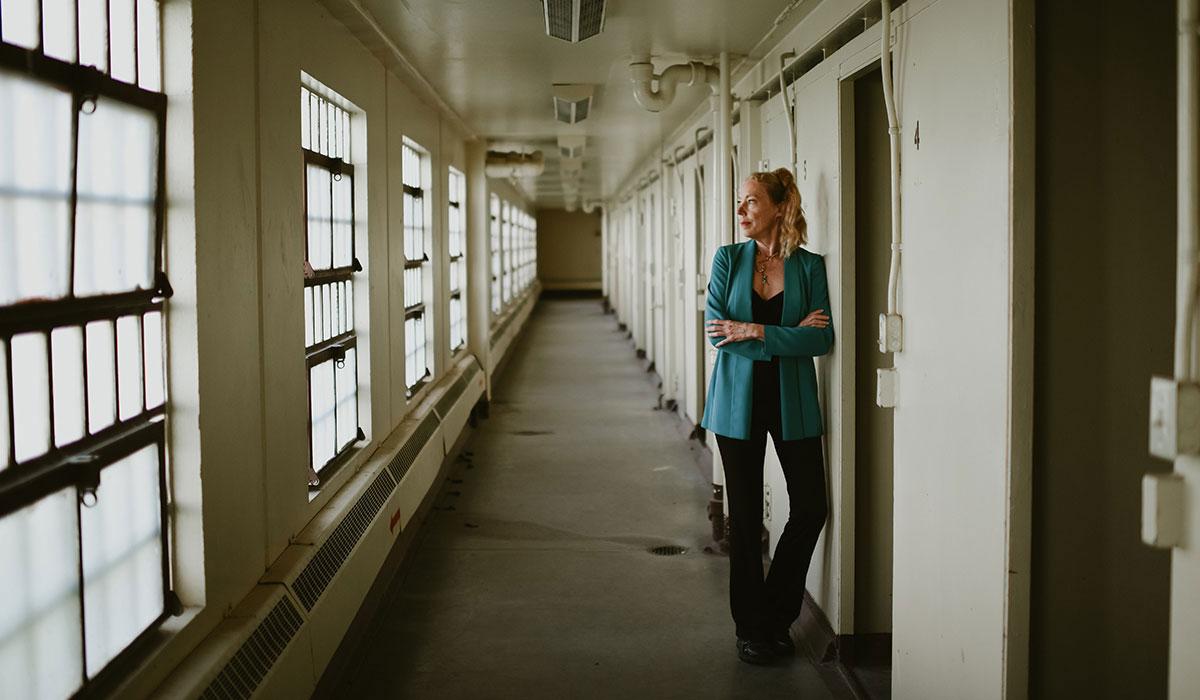 They say every medical doctor has stories to tell of difficult cases, miraculous recoveries and the patients who touched their lives; for Dr. Karen Gedney, these stories are framed from behind the bars of the Northern Nevada Correctional Center where she served for thirty years as a doctor for the inmates housed there. Gedney will be a part of this year’s Distinguished Speaker Series, which takes place on Oct. 22 in Sierra 108 at 7 p.m. Her topic, “Looking at Prisons Through a Different Lens; Holistic Approach to Prison Reform" offers her insights based upon her experiences that are recorded in her memoir 30 Years Behind Bars: Trials of a Prison Doctor.

Unusual circumstances brought Dr. Gedney to this career that quickly became a calling; she was awarded a Health Corps scholarship for her medical degree that she earned from the University of Cincinnati Medical School and her residency, which was completed at the University of Nevada, Reno. However, the scholarship required that she complete four years of service in an underserved area. She was given the choice between Cabrini-Green (a public housing complex in Chicago,) or the Northern Nevada Corrections Center in Carson City. The latter didn’t require Gedney and her husband to relocate.

“I got a call from Carolyn Ford at the National Health Corps telling me that prisons were in dire need of medical personnel. At the time, I was finishing my residency, and serving as a doctor in a prison wasn’t even on my radar,” she said. “I looked at the phone in my hand and thought: so I’m going to prison for the next four years.” Yet, for this young medical professional with the belief that nearly everyone has the ability to change (what doctor doesn’t believe their patients can return to health?) the assignment would present her with challenges she wouldn’t have fathomed.

The Northern Nevada Corrections Center was a mere 20-minute drive from Gedney’s home, and she remembers, “When I turned onto the prison road... I was entering a different world.” Indeed, as Nevada’s first female prison doctor, Gedney was entering uncharted territory. Feeling initially like a fish out of water, Gedney found herself without direction or guidance. The Medical Director was on extended leave and no one seemed to know when he would return. When he did return, she learned that he was terminally ill with cancer. “When the Medical Director died, I was thrown into an alien world. I had never had any kind of supervision or training. Others started asking me to make policy decisions at a state level, something I wasn’t really prepared to do. And, in the prison itself, a lot of people saw me as a threat because I didn’t share their mentality of locking the prisoners away and forgetting about them.”

Instead, Gedney—who was known as “Dr. G”—treated the inmates as patients. This might seem like an obvious thing to do, but within the prison walls, it was revolutionary. “So many of the inmates made an impression,” said Gedney who kept a journal and all the cards and notes the inmates have given her over the years, which later became the material for her memoir. The stories she tells are many, and it’s hard to nail down just one.

“In life, one can experience situations that bring out the best or the worst in people. Prison is one of those unique places,” she said.

In 2018, Nevada got the record for holding an innocent woman behind bars for the longest amount of time. Cathy Woods, who is mentally ill, was sentenced twice—once in 1980 and again in 1985—to a life sentence for a crime she didn’t commit. According to a story that ran in the Los Angeles Times, she was released in 2016 “...and walked out the prison door with a few belongings, memories of electroshock therapy and suicide attempts and including setting herself on fire...” The last, an injury that Gedney treated during her service as a prison doctor.

Currently, Nevada has the highest incarceration rate in the United States, with 763 inmates per 100,000 population (whereas the incarceration rate for the country is 698 per 100,000). Of those 13,000 inmates in Nevada’s prisons, 1,200 currently have parole, which means that 10% of that population could leave to an approved transitional program. The problem: there are not many of these kinds of programs to meet the state’s needs.

More startling, of the parolees who are released, 57% will return to prison due to a technical violation. Meaning: they haven’t committed another crime, but nonetheless will continue to reside behind bars. This, said Gedney, is a problem—and why we need a more holistic approach to prison reform. “I want to shift awareness from the old paradigm in corrections premised on punishment, harm and recidivism to a medical model that focuses on prevention, healing, and reintegration. Prisons aren’t known as inspiring places—they can grind a person down and destroy them.”

The impact of incarceration goes beyond the individual, impacting families and communities. Children who have a parent in prison have emotional trauma from their disrupted family life that is often accompanied by compromised mental health, social interactions, and educational opportunities. “It can destroy a family,” said Gedney who, through the non-profit Big Brothers Big Sisters of Northern Nevada, has mentored five children from families where at least one parent is incarcerated. The three older children have moved onto college and are focusing on positive futures. The two younger children are “works in progress... But this kind of work makes you realize that you can change the trajectory of the generations to come,” she said. “People just need to realize they can be a part of the solution.”

Her experiences in the prison and as a mentor illustrate the many reasons why Gedney is compelled to speak out about holistic prison reform. “The criminal justice system and the medical field mess up in the same way:  they both start by trying to fix things by throwing money at the tail end of a problem. They blame the person who is set up for failure. Instead, we need a prevention piece to keep people from ending up in prison in the first place, a healing piece on the inside so prisoners can gain skills and a reintegration piece so they can quickly become an asset to society.”

Gedney’s memoir, 30 Years Behind Bars: Trials of a Prison Doctor, was published in 2018 and in addition to recounting her long tenure as a prison doctor—which is rife with conflict and challenge—also articulates Gedney’s personal growth that was a result of her work there. Perhaps the most harrowing scene happens early in the book when she is taken hostage and assaulted by an inmate who was known as “Moth.”  The ordeal, which lasted 10 hours, ended when deputies tossed a “flash-and-bang” concussion grenade into her 12-by-12 foot office, and then killed the inmate. Despite what had happened to her, Gedney returned to work the next day.

“I had German parents who taught me that if you fall out of the tree, you get back up and play. It never occurred to me to be a victim or to soothe myself because something bad had happened,” she said. “ I had a lot of anger, though—some of it at myself because I had let that happen, some at the custody officers who’d let him in with a knife and all his provisions, and anger for the inmate for what he did.” That anger erupted during a training on bloodborne pathogens when Gedney told the new officers that the absolute worst thing to do was to let workplace trauma go unnoticed. After that, her story became an integral part of the training.

It was also a moment that sparked reflection: “At the time, I was 32 and a doctor. I would survive. But when you’re only 7 and something like that happens to you and you don’t have any supports? I worked with the Nevada Board of Parole member Robin Bates on a project, and he told me that 99% of the female parolees that come before the board have been physically, emotionally and sexually abused at some point in their lives.” In many ways, this is the thread that runs throughout the chapters of Gedney’s book: the capacity of human beings to heal if they have the right support from the people around them, and if they choose to do the necessary work.

According to a Nevada Department of Corrections survey, 58% of Nevada inmates come to prison without a high school diploma and more than 78% come with only minimal job training. For these reasons, Gedney took part in—and led—several support groups that helped to prepare the inmates for lives beyond prison walls by teaching skills that they could use on the outside. These groups included Gedney’s Health-Related Recovery (HRR) group that taught life skills, a Toastmasters group, among several others. “When I trained to be a doctor, I didn't realize that the word comes from the Latin verb ‘docere’, which means ‘to teach.’ In prison, I found that I loved teaching patients and inmates what they needed to know in order to heal and thrive.” Her book is filled with examples of healing: of men finding healthy hobbies, careers and vocations, leaving the prison, ready to begin new lives. Believing in the capacity of each to change their lives for the better was the key to their success.

“Many people, especially the ones in custody, believe that people can’t change,” she said. “I choose to believe they can.”