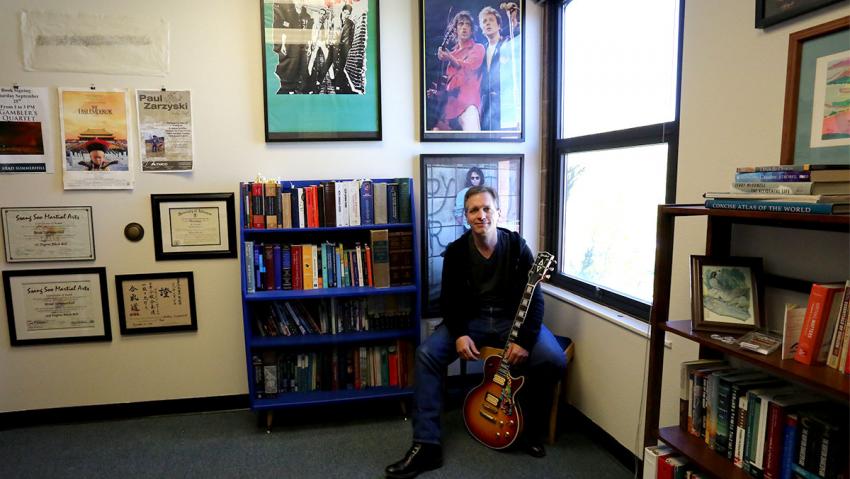 In order to understand TMCC’s English Professor Bradley Summerhill, it’s important to keep the nuances of “harmony” in mind.  The most common definition refers to music: the combination of simultaneously sounded musical notes to produce chords. And while this is certainly applicable to the guitar-playing Summerhill, investigating the etymology of the word (which originates from the Greek harmos, meaning “joint” as in the knee joint) there is a deeper meaning of connecting of two or more elements into a cohesive whole.

This is writer’s work: searching for patterns, structures, and themes. Or, more precisely the work of the fiction writer: crafting situations that seem real enough, the creation of characters from air with whom readers will emphasize—writing that works like a window into worlds that might (but don’t) exist.

Summerhill has been a part of the TMCC English Department since 2001. Teaching English, though, hadn’t ever been on his radar. “I just fell into it,” he said. “I was always interested in writing. I worked as a technical editor, and then as a journalist before I went to graduate school to study literature and creative writing. I really had no plan to take up teaching, but that was how I got through graduate school... and I thought: ‘hey, this is a pretty good way to make a living,’” said Summerhill, who’s taught introductory English classes, creative writing classes and, for a few years, served as editor of TMCC’s literary journal The Meadow.

The community college wasn’t where Summerhill envisioned himself, although in retrospect it is an environment that caters to his strengths as a craftsman of various disciplines. “I’ve always been an artist,” said Summerhill, who has authored a novel (Gamblers Quartet, 2010) and whose short stories have appeared in the South Dakota Review, Red Rock Review, Clackamas Literary Review, Aethlon, Reno News & Review and elsewhere. “When I started teaching, I made this unspoken assumption that all students came from the same place I did. It wasn’t [accurate.] I teach students who come from very different backgrounds than I did: I teach first-generation college students who are working, oftentimes 30–40 hours a week. They are here and they are doing it. And I certainly appreciate what these students bring to the classroom,” he said.

He incorporates his perspective as a practitioner of writing. “Instead of studying the ‘why’ of literature with my students, I attempt to have them investigate the ‘how’ of it. How is a piece of literature created... or any text, whether it be an article or a film?”

This attention to the construction of expressive texts is echoed in Summerhill’s insistence that students read before they write. “If you want to write, you have to read every day. You read all kinds of stuff. You find what you love to read, and then you figure out how that person put that together. And then you figure out how to imitate it, how to make it your own in a creative way.”

Trying on voices, narrative structures, sentence structures, point of view—these exercises enable students to access their own authentic voices. If it takes a person a million words to become a proficient writer, Summerhill suggests slowing down and taking your time to learn the craft so that your time is well-spent, making those first million words count for something.

Recently, Summerhill’s writing has turned away from fiction and toward another creative pursuit: songwriting. He’s formed a local band called Adapter (in which Summerhill performs vocals and guitar.) “It’s fun to get people up and moving with something you’ve written and that they haven’t heard before,” he said. “That’s the thing about songwriting—the immediate response you get. And when you can share an original creation with other people, and they may be moved by it—enough to clap or dance—that’s a wonderful thing.”

Summerhill describes Adapter’s sound as a mix of old and new, with rock and reggae influences. The band’s flexibility its literal and metaphorical harmony—ties into Summerhill’s other interest: martial arts.

In 2002, one of Summerhill’s students mentioned that he taught a martial arts class, and asked him to join. Summerhill told the student he’d “think about it.” The student, perhaps a disciple of Yoda, replied: “Don’t think about it, do it.”

Those words turned out to be life-changing:  Summerhill has earned multiple black belts in Tang Soo Do (a martial arts practice from Korea), and currently teaches a Tong Soo Do class at a gym on East Fourth Street. “Here’s the thing about martial arts: it’s the practice of finding harmony within conflict. Life is filled with conflict,” he said. “We can’t avoid it—nor should we. We should embrace it in a positive way.”

“People misunderstand what it’s about. I’m not going to teach you to punch someone in the face to earn a point. To me, that’s not what martial arts is.  It ties in with everything I do in the classroom, with music and with writing.”

Summerhill has written a textbook for first-year composition students that will be published this fall and distributed nationally (Engaging Discourse, Kendall Hunt).  Developed in part during Summerhill’s sabbatical, the textbook encourages students to engage in public discourse and to develop the “lost art of meaningful conversation.”

Engaging Discourse is a culmination of Summerhill’s professional experiences. “We live in an age when people are discouraging young people from marching to the beat of their own drummer, if you will—as parents, we worry about when our kids want to follow their passions. But that’s what we need right now: we need to compel young people to do something, to take a risk.”

These risks should be fueled by passion, creativity and innovation—traits needed in the world of public service, business, technology, and entrepreneurialism—not just in the arts. “Young people need to be flexible, to be adaptable,” he said, suggesting that the kind of thinking we need requires a capacity to imagine solutions that don’t yet exist, so that one day, they might.