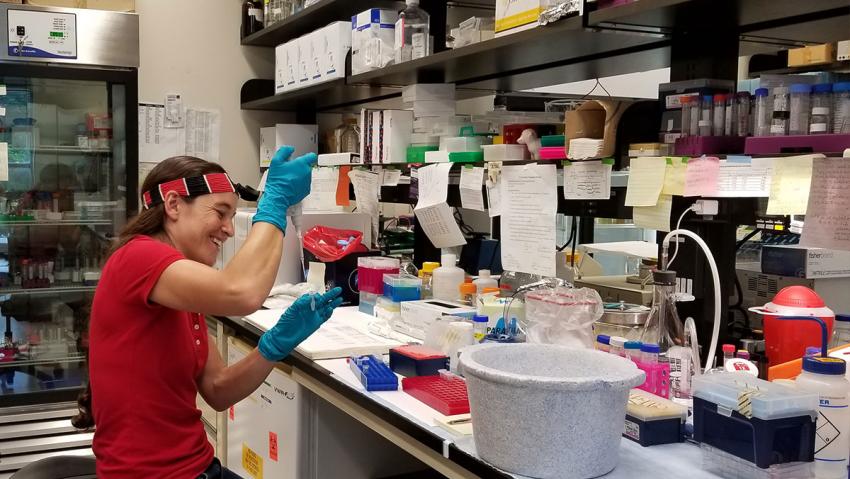 This summer, TMCC Nursing student Heather Dorsey-Hirt completed a 10-week internship with the National Institute of Health (NIH). Dorsey-Hirt, who has completed two summers of TMCC’s BioResearch program and who has taken multiple microbiology classes, had a moment of doubt before applying. Those feelings were certainly misplaced; Dorsey-Hirt, who just completed her internship the day before the fall semester, said the experience was: “The coolest thing that has happened in my life.”

Students who are selected for the internship will, like Dorsey-Hirt, conduct their internship at the main NIH campus in Bethesda, Maryland. Interns receive a monthly stipend based on their education level and experience. The 8-10 week internship typically begins in June and ends in August.

The rest, though, depends on what you bring with you; for Dorsey-Hirt, her lifelong passion for science—which began with a microscope she bought at a garage sale—unexpectedly prepared her for an experience that would be life-changing.

Dorsey-Hirt describes herself as being “always kind of interested in plants, animals, and insects.” She remembers buying her first microscope from a garage sale when she was seven years old and then setting up a “lab” in her bedroom where she would collect samples to study, among them guppies from the household aquarium.

All of this changed when Dorsey-Hirt turned nine and visited a college biology class that was studying parasitic worms. “I was really excited about it,” she remembered. “When I was there [at the college], I met a female Biology Professor and she was like a god to me. She told me I could be a scientist one day. And, I believed her.”

Dorsey-Hirt, who was homeschooled, remained fascinated by science, but “...I lost confidence when I got older,” she said. By the time Dorsey-Hirt applied to TMCC, she assumed that she was too old to pursue her lifelong passion of becoming a scientist.

“I went into the Nursing program instead,” she said. “I like taking care of people, and [the major] still offered some of what I love about science.”

The NIH Internship paired Dorsey-Hirt with a practicing scientist who works in a lab at the main NIH campus. For five days a week from 8 a.m.–5 p.m., Dorsey-Hirt was immersed in the world of viruses, particularly the D68 Enterovirus, a virus that can cause mild to severe respiratory symptoms, including a runny nose, sneezing, cough, body aches, wheezing and difficulty breathing. For those who are infected, D68 can lead to paralysis and can be lethal—even in healthy adults (although that is less likely.) There is no known cure. Because an outbreak happens every two years, the scientists in the lab where Dorsey-Hirt was interning were building off the work of Dr. Altan-Bonnet, who discovered that stomach infections are more contagious and more potent when the virus particles cluster together. Dorsey-Hirt and the other scientists in the lab at NIH were building off this new research,  looking for ways to block these virus clusters by testing compounds that would inactivate the virus’s proteins.

“Intellectually, NIH was a big challenge,” said Dorsey-Hirt. “They were willing to come down to my level. I think I learned as much as I would in several weeks of college classes. At one point, I used a $600,000 laser microscope. I can’t believe they let me touch it.”

Although Dorsey-Hirt spent most of her time at NIH doing research on the D68 Enterovirus, there was also plenty of time for getting to know others who work there. Her favorite question to ask the many scientists was: “What do you do here?”

That question always got an interesting response, and Dorsey-Hirt met scientists who were tasked with milking mice (and they taught Dorsey-Hirt how to milk the mice, too) and others who would play movies for the monkeys to give other scientists time for a lunch break.

There’s no question whether or not Dorsey-Hirt will complete an additional internship. She’s already been invited back to the lab where she studied the D68 Enterovirus, but she’s exploring other possibilities, including a lab that studies Sandflies and Black Fever.

“The experience gave me an enormous boost in my self-confidence,” she said. “I learned so much, and loved working with scientists from all over the world.”

How to Land an Internship with the NIH

If you’re passionate about science, Dorsey-Hirt says the first step in your journey should be to participate in the BioResearch program and to take biology classes at TMCC. Not only will this give you important knowledge in the subject matter and the research experience you will need to complete an internship at NIH, but it will help you to build your resume. “You need to have a good rapport with your professors because you will need letters of recommendation to apply,” she said.

From there, there are two avenues through which interested students can apply: the NIH Community College Summer Enrichment Program (CCSEP) or the NIH College Summer Opportunities to Advance Research (C-SOAR) program. C-CSEP applicants must be U.S. citizens or permanent residents who are enrolled at least half-time at an accredited Community College and have a 3.0 GPA.  C-SOAR encourages students who have disabilities, students who are Pell Grant-eligible, enrolled at Hispanic-serving institutions, who identify as LGBTQ, and disadvantaged by circumstances that have negatively impacted their educational opportunities including recent natural disasters to apply.  The goal of both programs is to inspire a diverse group of individuals—community college students among them—to consider careers in the biomedical sciences.

Dorsey-Hirt says the internship has prepared her for the Nursing program this year and has helped her to think about ways of combining her love of research with her practical nursing skills. “After I complete my nursing degree and become a Nurse Practitioner, I want to work toward a degree in Microbiology, so that I can do research and work as a nurse.” For someone interested in the detailed realities through which science can offer glimpses, Dorsey-Hirt has found that the science lab is exactly where she belongs. 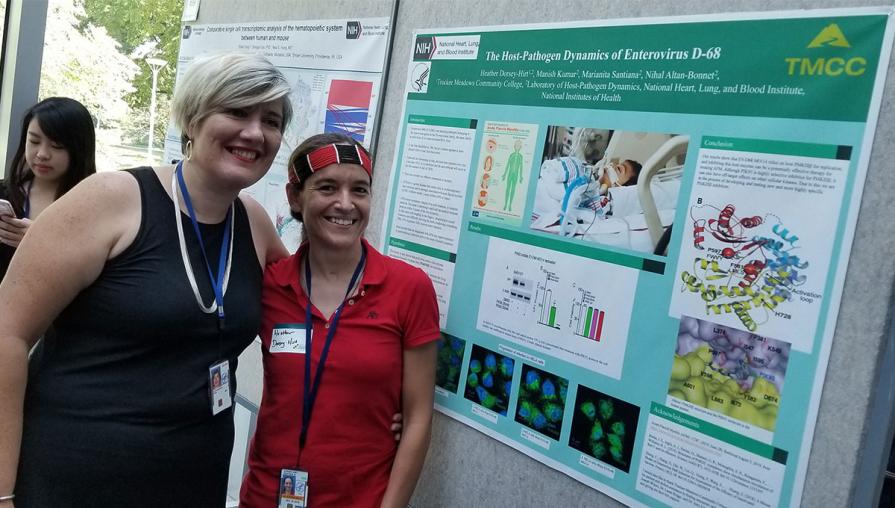 Heather Dorsey-Hirt (right) with Dr. Altan-Bonnet who discovered the way the Enterovirus D68 packages itself. 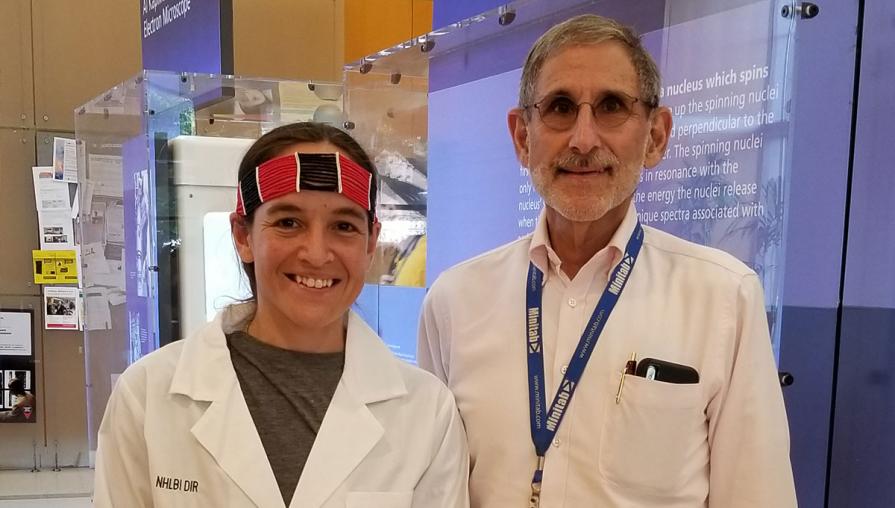 Dorsey-Hirt with Dr. Geller, who helped her through the application process for the internship program. 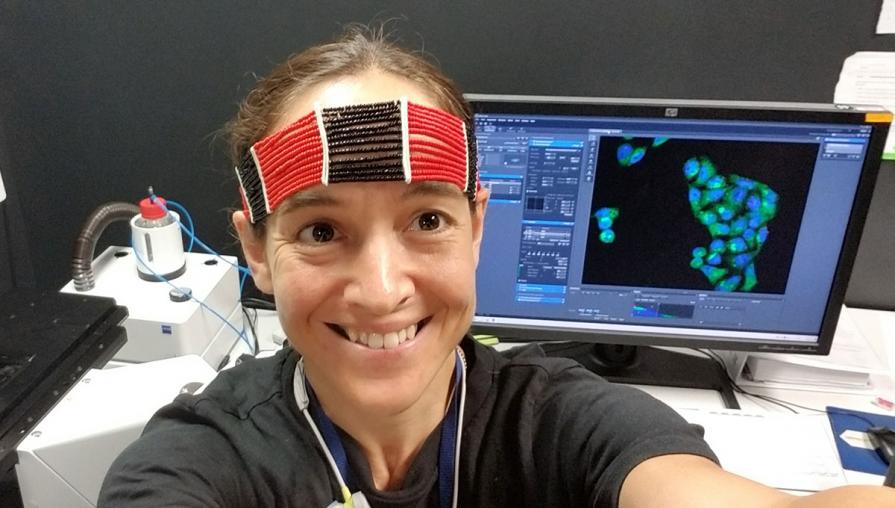 Dorsey-Hirt posed before the laser scanning confocal microscope she used most of the summer.