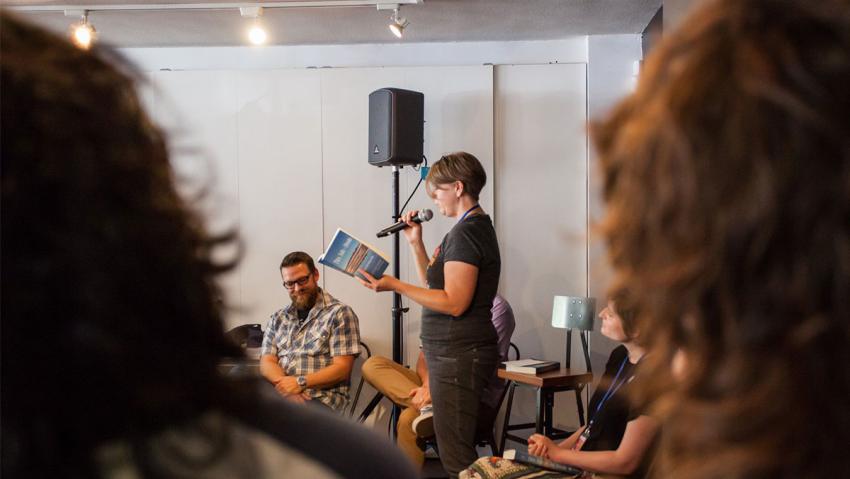 Since 2013, Reno has hosted a Literary Crawl that has grown from hosting a handful of local authors to a nationally recognized event that celebrates the rich literary talent of Nevada. This year’s iteration of the Reno Lit Crawl, which happened on Saturday, Sep. 14, featured TMCC faculty Mark Maynard and Lindsay Wilson, who shared their particular interests and creative work with a record number of attendees.

Maynard, who served on a panel for Baobab Press’s new anthology This Side of the Divide: Stories of the American West, was one of three authors who shared their work that appeared in the anthology. His short story, “Last Call at the Smokestack Club” is a crime story set in a small bar in the fictitious company coal town of St. Leonard, Wyoming. Maynard was joined by Siân Griffiths (from Ogden, Utah) and Miranda Schmidt (from Portland, Oregon). Moderated by Danilo Thomas, who also edited the anthology, the panel explored ideas that were presented in each author’s work. “The panel answered questions after the readings that discussed the mythology of ‘The Western’, how we write about the contemporary American West, and how to be inclusive of more diverse voices when writing in and about the American West,” said Maynard.  “We had an amazing turnout.”

Maynard has seen the event grow from its inception; in fact, he and TMCC English Professor Karen Wikander founded the event with Nevada Humanities in 2013, and have watched it grow from a few  readings to this year, which featured themed panels on varied subjects—everything from LGBTQ, food,  and readings geared for kids and families.

Literary crawls aren’t a Reno invention, but this one has a distinct Nevada-flavor, thanks to the involvement of Sundance Books and Music on California Avenue and the administrative oversight of Nevada Humanities, which has helped to link Reno’s Lit Crawl to other statewide literary events, such as the Las Vegas Book Festival and Nevada Reads.

If you can’t picture what a lit crawl is, think of its cousin, the pub crawl where attendees are encouraged to wander from establishment to establishment to imbibe various concoctions. A literary crawl is similar, only that cafes and bars host authors who read their fiction, non-fiction or poetry—or they serve on panels where multiple authors discuss a particular topic or literary figure. Attendees are able to listen to several authors and topics while wandering from reading to reading.

The Reno Lit Crawl also provides access to voices and works that might not otherwise receive it. TMCC English Professor Lindsay Wilson, who has participated in the event since its inception, was a part of a panel this year that gave tribute to the Nevada-born poet Adrian C. Louis. Never heard of Louis? Wilson said that’s not surprising. Although he was a member of the Lovelock Paiute tribe, much of his work focused on his life in other areas of the country, and he rarely mentioned growing up on a reservation in Nevada.  Despite that omission, Louis’s work influenced several Native American writers, including Sherman Alexi who claims that had he not read Louis’s poem “Elegy for the Forgotten Oldsmobile” he would not have become the acclaimed novelist, poet, and screenwriter that he is known as today.

When Alexi was in college, he sent Louis a letter, to which Louis responded telling Alexi to keep writing with a $50 bill taped to the note. According to Wilson, who read Louis’s work along with authors Shawn Griffin, Everett George, and Gailmarie Pahmeier, this was the way Louis encouraged many Native American writers to continue writing their poems and stories.

Louis’s work—which Wilson describes as “...what’s the word when irreverent isn’t strong enough?”—appeared in TMCC’s literary journal The Meadow in 2008 and again in 2016.

“We [Pahmeier and Griffin] talked about doing a tribute to a Nevada writer every year,” said Wilson. Louis passed away days before last year’s event, and so it was only fitting to honor his writing and unique voice in this year’s event,” said Wilson. Louis’s death also occurred days before the publication of Wilson’s poem ‘Backyard Wedding Reno, Nevada with a line from Adrian C. Louis’, which he read for Reno’s 150th Anniversary celebration.

“When I started writing the poem, I started thinking about all the different populations here--the Basques, for instance—and then I thought about including the native voice and perspective. There is this line from Adrian Louis that I had to include—‘Happiness comes at a price’—and that line occurs in the poem,” said Wilson.

Discovering new and overlooked voices is what continues to draw audiences to the Reno Lit Crawl. “It’s been fun,” said Maynard. “Lindsay Wilson and Virginia Castleman have been a part, so there is a strong TMCC connection in this community event. And, it’s fun for students to get out and see us reading, and to be able to talk to authors directly about their work.”

Yet, participation in events like the Reno Lit Crawl go beyond showcasing our stellar faculty (although there is certainly that). “I think having our faculty participate in these types of events is a great example of our mission to educate and serve the broader Truckee Meadows community,” said Maynard. “Also, something unique about community college faculty is that most of them have worked for years in the fields and disciplines in which they teach, and this is reflected in the participation of our creative writing faculty in literary events as well.”

Reno’s Literary Crawl happens each Fall, and all the sessions are free. In addition to featuring TMCC faculty, the event has also featured students and other contributors to TMCC’s Literary Journal, The Meadow. For more information about studying creative writing at TMCC, contact the English department at 775-673-7092.