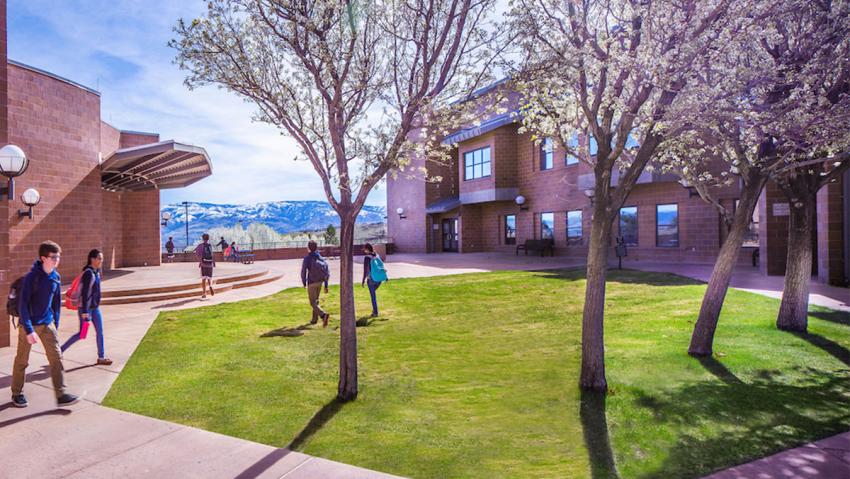 Facility Manager of NNTH, Lieutenant Jonathan Wilson, said that the partnership is helping not only this particular population, but also our community.  “A lot of the guys who come to us have never had a real job, and they never considered the possibility of college,” he said. “They got in trouble and dropped out of whatever level of education they had been in. All the time, I hear them say 'I never thought I’d be a college student.'” For them, having that education as a part of their transition back into society is a transformational experience.”

TMCC as a Vital Partner

The first cohort of justice-involved students came to TMCC in 2018. Since, there have been three generations of these students who are attending classes where they are working toward certificates and degrees that will enable them to find professional careers. This is vital, said Camille Vega who is the Coordinator for TMCC’s Re-Entry Center. “There are three elements to preventing recidivism,” she said. “One is employment, the second is education and the third is family. If we can help these students get an education that can enable them to become employed, that goes a long way into helping them to be successful.”

The numbers tell the story: typically, parolees have an average recidivism rate of 25% after 90 days. Those who have taken classes at TMCC and who utilize the supports from the Re-Entry Center report a 16% recidivism rate for the same amount of time—a remarkable reduction.

In addition to helping parolees to take classes, the Re-Entry Center also provides a support system, where these students can go for help with applying for Financial Aid, for job placement supports through the Career Hub or other on-campus supports. “It helps them to talk to one person about their story,” said Vega. “Even if it means that I go with them to Financial Aid—helping them to do all of this builds their self-efficacy and their sense of self-worth.”

Founded in 2015, NNTH enables its tenants—called “Community Trustees”—to have safe housing, structure and supports that can help them to not only gain real-life work experience (having a full-time job is a requirement of the program) but to build their savings so they will have the resources a person needs to face the day-to-day challenges that come up in life including rent, food for groceries and emergency situations (to name a few.)

Programs like the NNTH are rare, though; typically, prisons release those who’ve served their time with $25 for bus fare and nothing else. That’s a terrifying prospect for anyone to contemplate: $25 doesn’t get you much; it’s certainly not enough for a rent deposit or even enough to buy the type of clothes you need for a job interview.

That’s where NNTH steps in. The 108 community trustees currently living at NNTH hold full-time jobs in the community. They pay for their room and board (and taxes) while adhering to the rules of the facility, which include no alcohol or tobacco, maintaining good behavior, a clean appearance, and adhering to a strict system of reporting and monitoring. In return, they have a small dorm-style room that is shared with three others (with two bunks on each side),  two hot meals served at 4:30 a.m. and 4:30 p.m. to accommodate the majority of the men's’ work schedules, and a sack lunch they can take to their jobs during the day.

On the mess hall wall above the tables is a tapestry of t-shirts that Lt. Wilson explains they have collected from companies that have employed men from the facility. “We want to remind them of the opportunities they have ahead of them,” he said.

A Day in the Life at NNTH

NNTH receives new intakes who are transferred from prisons around the state on Fridays. When they arrive, they are dressed in their prison uniforms. The first step in the intake process is that each man is given civilian clothes to wear—prison uniforms are not allowed—before they attend a mandatory, week-long orientation where they learn what’s expected of them, who their caseworker is, and how to begin their search for full-time employment. There are two computers available to type their resumes and cover letters (neither one is connected to the internet) and much of their time when they first arrive is spent looking for, obtaining and keeping employment.  While there are restrictions for who is eligible for the kind of transitional housing and services offered at NNTH, all of the men have served prison time, but have less than two years left on their sentence. Also,  anyone convicted of a violent crime, a sexual offense or who has a recent history of disruptive behavior is not eligible for NNTH.

Aside from the dormitory-style rooms, the mess hall and the computers, there are two classrooms (used mostly for orientation) and a yard where an assortment of open space and weight-training equipment is available to the Community Trustees from 7 a.m. -8:30 p.m. During the middle of the day, the facility has an empty feel to it; according to Lt. Wilson, two-thirds of the population are working at their jobs at any given point during the day.

“Finding and keeping a job is the number one priority,” said Lt. Wilson. “If one of the men is interested in going to school, he has to work full time for 30 days first. We want to make sure that the men are acclimated to this environment and working full-time before we give them more responsibilities.” After 30 days, those interested in pursuing their education while they work can enroll in classes. The only caveat: if they haven’t finished their high school education, they start with earning their diploma. “Having them start with getting their high school education completed helps them to get back into the education groove,” said Lt. Wilson. “If we start them that way, they do so much better when they take classes at TMCC.”

Yet, education is the key to the success of these men. “Education is the number one thing that gets people out of the system and keeps them out,” said Lt. Wilson. “TMCC has taken the lead on that, and this is certainly an opportunity for people trying to make themselves better.”

NNTH Community Trustee Benedict Karbo started taking TMCC classes in the summer and is currently enrolled in six credits this semester. He is holding a 3.5 GPA, which is impressive when you consider he also works 42-48 hours a week. Yet, Karbo is optimistic about his progress. Class, he says “...is so awesome. It is giving me an opportunity to further my education, and improve my self-worth and confidence.”

All NNTH Community Trustees are limited to taking only six credits at a time, and there are important lessons that happen along the way: having to negotiate the requirements of setting up a meeting with a tutor, for example, requires that Karbo and others like him fill out paperwork that can take 24 hours to be approved. For him, there are no last-minute decisions to study in the library or to drop by a professor’s office hours—all of his movements need to be documented and approved in advance.

“It sounds like a lot, but if I mean, if I can deal with it here then I can deal with processes like that at home,” said Karbo. “Education comes in a process, and it’s not like instant oatmeal—it’s a step-by-step process and it’s going to take me a while to get through it.”

Yet, Karbo is taking the necessary steps toward the future he has envisioned for himself. A Community Health major, his ultimate goal is to become a Drug and Alcohol Counselor. “I want to help others who get themselves in the predicament I was in,” he said. “I can help them to navigate out of that.”

So far, his favorite class is English 101. “I didn’t know how to research or how to write essays for college using MLA style. But, it’s not as difficult as one might think... and Professor Summerhill works with me so that I can succeed. He told me not to let anyone stand in the way of getting my education. And, now I see my future brightly.”

Supports for justice-involved students are provided through the TMCC Re-Entry Center. For more information about their specific programs and support services, contact the department at 775-673-7060.