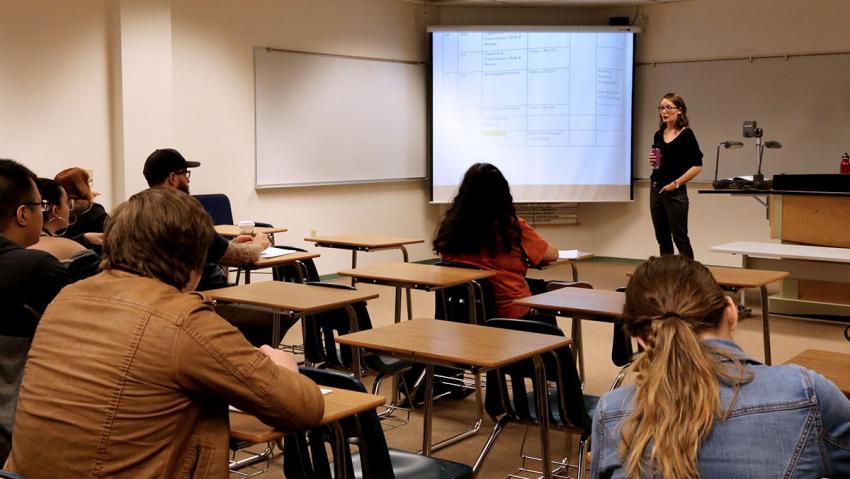 In 2014, writer Kent Russell published “We are Entering the Age of Alzheimer’s,” an essay that wove the author’s personal experience caring for his father, who had a developing case of Alzheimer’s, with neuroscience and psychological data that described the physical and psychological decay that accompanies the condition.  The piece’s objective was to educate readers on what Alzheimer's actually means inside—the destruction of physical processes—and outside—with the destruction of relationships and the erasure of one’s place in the world.

TMCC Psychology Professor Haley Orthel Clark teaches Psychology 105, Introduction to Neuroscience,  a class that works in a similar way to Russell’s essay: it’s a class that gives undergraduate students insight into the interplay between the physical structures of the brain and how these manifest in our thoughts and relationships with others.

“For example, in the larger community, we see occurrences of neurological disorders such as Alzheimer’s, Parkinson's, Multiple Sclerosis,” said Clark. “Having a working knowledge of what that looks like, and what it’s like to live with those types of disorders...those are powerful pieces of information to have. And that knowledge enables you to relate to people better.”

The class, which for the last few semesters culminated in a dissection of a sheep brain, enables students to dabble in experiences common in the study of psychology—the hands-on grappling with difficult and sometimes troubling realities. Yet making these experiences objective is the name of the game: “It’s one thing to define a psychological disorder in terms of symptoms that a person might present with, but it’s very different from what it means to live with that disorder,” said Clark.

That is the work of psychology: an excavation of ourselves from the structures of the brain that drive behavior and perception. “And isn’t that the goal of education?” asked Clark. “It allows people to marry their experiences with more formal theories in order to drive their creative processes.”

An Interest in the Inner Lives of Others

Clark has been a part of the TMCC community for over four years, and in that time, she has achieved much: she is a NISOD award winner, former Chair of the Curriculum Review Committee, Psychology Club Advisor and a dedicated educator in her field. Through the classes she teaches, she encourages students to make objective inquiries into their own experiences and to turn the stuff of everyday life into science.

Her students have taken up the challenge, positing hypotheses and collecting data on anxiety and somatic symptoms (physical indicators of stress, such as insomnia or indigestion), gaming patterns and the impact of perceived reward.

“There’s always a lot of variety of topics the students are interested in,” she said. “I’m always excited to be on the sidelines to see how these projects play out.”

And despite the constraints of sample size or of the academic semester, the projects do, at times, speak to the larger goal of psychology, that objective unraveling of why we do what we do.

“Oftentimes, we spend a lot of our time in our own minds and in our own experiences analyzing our behaviors and thoughts,” said Clark. “It’s easy to over-generalize those experiences. The goal of psychology is to learn how to be objective in that process of trying to understand behavior and thought processes, and that is the powerful thing about psychology,” said Clark.

Clark came to the study of psychology young. “I was an anomaly as a child,” she said. “I have very distinct memories of going to Barnes and Noble with my parents, and I’d go over to the psychology section where there were case studies and books that were basically exploring a person’s inner world. I found those books to be so fascinating.” She remembers reading works like Virginia Alxine’s Dibs in Search of Self and Elizabeth Wurtzel’s Prozac Nation.

“These stories...delved into people’s thoughts and their day-to-day lives. It was sort of like taking a vacation from your own experience, and you could learn what it was like to be in someone else’s shoes,” she said. “I found this really fascinating.”

This fascination led Clark to explore several different aspects of psychology, including clinical psychology or working as a school psychologist. In the end, it would be Clark’s interest in statistics and methodology that would lead her to where she is today.

According to the American Psychological Association, psychology is the fourth most popular undergraduate major in the U.S. today behind business, social sciences/history and education. Beyond its capacity to help students understand themselves and others, the discipline also offers students valuable skill sets that are applicable across different fields. “Studying psychology [teaches] individuals how to conduct research, and also how to apply statistical analysis. There are critical thinking skills that come along with learning about methodology and statistical analysis that are invaluable because we’re inundated with a lot of information through media and news and it can be hard to sift through all of that,” said Clark.

It is also a degree that can lead to answers to some seemingly unanswerable questions: what is the nature of friendship? Or love? Why do our relationships work the way they do (or don’t)?  Why can’t we sleep at night? What is the nature of prejudice and where does it come from?

“I think this is a powerful area of study in the sense that again, oftentimes we tend to think through a very personal lens through behavior and experience because that is all we know. [...] If you are thinking about tougher topics like why prejudice exists, psychology gives you a lens for trying to evaluate that not from an emotional standpoint, but from an objective standpoint. Here’s what we’re working with in terms of predisposed cognitive patterns, here’s what we’re working with in terms of environmental factors, history, and influence and you can put that together not only to analyze why these things exist but potential how you can curb them or stop them, or at least reduce them,” she said.

The Key(s) to Happiness

As a graduate student, Clark had an academic advisor who was working on large-scale data sets to understand how friendship influences happiness and well-being. It wasn’t initially what she was interested in studying, but she was drawn to the project because it relied heavily on her interest in statistics and methodology.

It may seem like things like statistics and scientific methods run contrary to concepts like friendship and happiness. The former is concrete, measurable and “cold”(in the sense that it is separate from human experience), while the latter is human experience—some part of it is always unquantifiable.

Think about it: what is sleep? What is friendship? Happiness? We tend to over or underemphasize our experience, which makes us terrible self-reporters. For example, you might say: “I hardly slept at all,” while logging over eight hours of sleep at night; or, while running on the treadmill, you might think: “I’m overdoing it,” but you’ve hardly broken a sweat.  Friendship and happiness are elusive and multi-modal experiences that are nonetheless essential to our wellbeing.

But that’s the task of a psychologist: to make subjective experience objective, and therefore, something that can be measured. “As social scientists, we’re tasked with taking these really abstract and nebulous concepts with lots of moving parts like happiness, and we have to figure out how to measure that in a quantitative manner,” she said.

It isn’t easy work, and students are sometimes baffled when creating a definition of something that must be objective and measurable. And perhaps that’s the crux of it, the essential challenge of psychology: learning how to define your own subjectivity despite the elusive, ephemeral and ever-changing thoughts that make us human.