TMCC physical locations are closed but classes and services are being delivered remotely. For more information, please visit coronavirus.tmcc.edu.  Register now for Summer and Fall Semester, view our class schedules!

Soccer Kicks Off the Official Season! 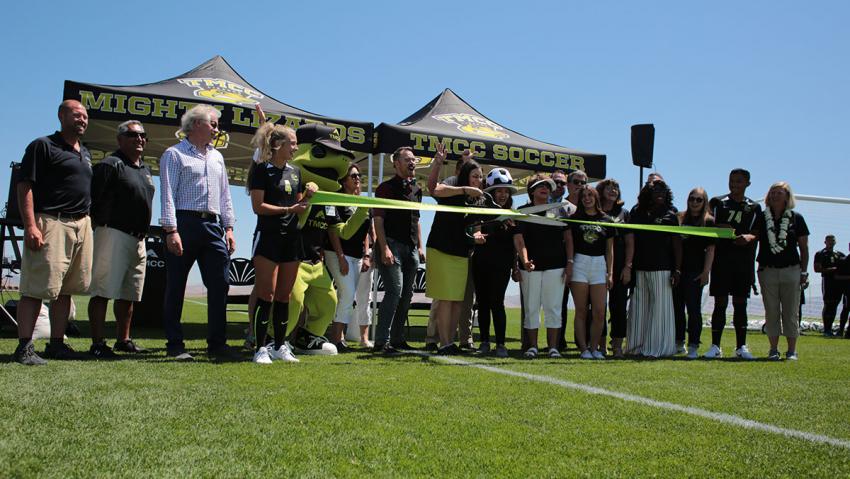 If you haven’t seen TMCC’s new soccer field, you should make a point to: it’s not what you’d expect. It’s expansive and green,  and overlooks Reno and Sparks, an attribute that might lead to a few lost soccer balls that clear the tall fences that surround the space.  Yet, it’s also a space that’s special for another reason: It’s a student-driven initiative that began in 2016 and that, three years later, is now a vibrant and tangible reality.

Official history was made with a ceremony held at center field which included a ribbon-cutting to mark the official opening of TMCC’s soccer program. The event, which was attended by nearly 500 guests, included lunch followed by presentations by several speakers and the formal introduction of each student-athlete.

TMCC Athletics Director, Dr. Tina Ruff, acted as emcee for the event and said that the event couldn’t have gone any better. “Today’s event was fantastic, it was priceless. It was one of those events that brought a lot of people to TMCC; a lot of community members, a lot of dignitaries, elected officials, NSHE Board of Regents, the Mayor of Reno and the Mayor of Sparks...it was really a culmination of what we are trying to do at the community college. Athletics will brings a new flavor to the college, and will help us drive student enrollment and student success.”

Reno Mayor Hillary Shieve also spoke at the event, complementing the athletes on their dedication to both athletics and academics. She also announced that August 15, 2019 will be known as “TMCC Mighty Lizards Day” on behalf of the City of Reno.

The athletes, however, were the real focus of the event, wearing their official kits and numbers for the first time. Shelby Shaffer, who comes to TMCC from Reno High School, will play midfield under the number 4. For her, the event announced a beginning to a season in which players will learn how to work together. “I’m excited to play in today’s scrimmage, to see how our team plays against other actual teams.” The scrimmage against Feather River, which began at 3 p.m. the same day as the Kick Off, will be the first in a series of three scrimmages before both teams enter league play.  “How much we grow as a team is the most important thing,” said Shaffer. “This season...we’ll get to see how much we grow.”

While the event certainly focused on the future of this new program, it also acknowledged that the soccer programs continue a legacy that began long in TMCC’s past, when the institution was a satellite campus of Western Nevada Community College. Under the direction of then-head coach and Director of Athletics and Student Activities Joe Ayarbe, TMCC had athletics programs in basketball, golf, boxing and track.  His son Joe and daughter Karen attended the ceremony.

Also in attendance was TMCC alumnus David Turner II, who was the SGA President in 2016-17, and who initiated the first conversations about bringing soccer to TMCC. “As soon as I walked down to the field, I got goosebumps,” said Turner. “This is amazing, and this was what I was trying to achieve and I left without getting to see it happen. I’m really glad I could do something to help get the momentum going to make TMCC a better place.”

With the soccer season in full swing, the excitement on campus is undeniable and palpable. Be sure to check the soccer schedule on the new TMCC Athletics website, and mark your calendars for our home games. The website will also feature live streaming video of home games.

For more information about TMCC Athletics, contact the department at 775-673-7135. 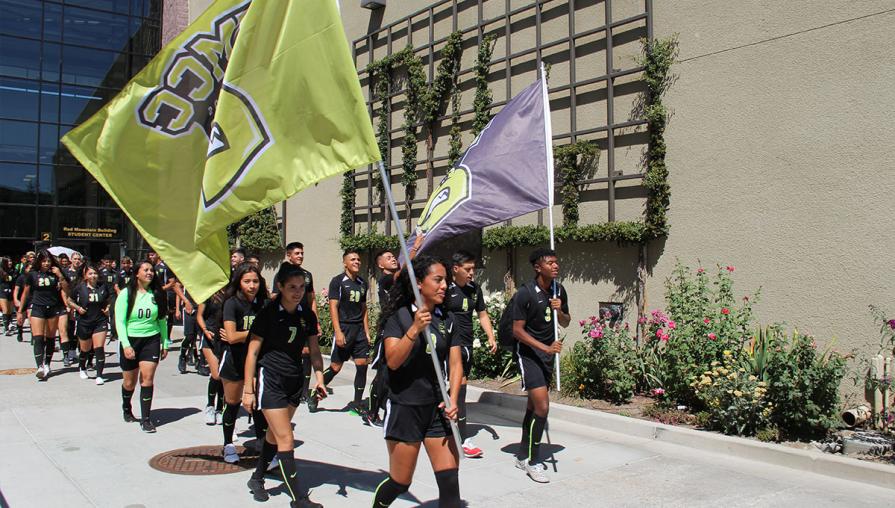 TMCC’s Kick Off event began at the Student Center with a march to the soccer field. 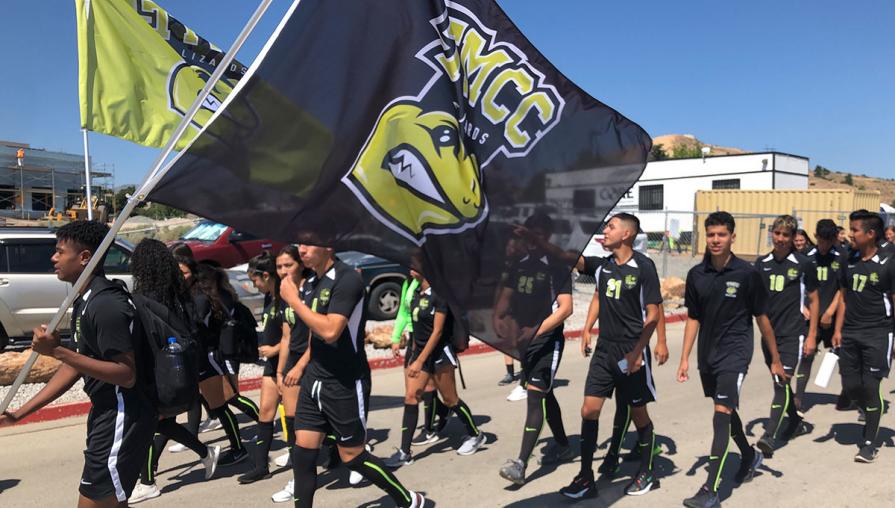 Student-athletes, staff, and visitors followed the TMCC flags on a meandering route to the field. 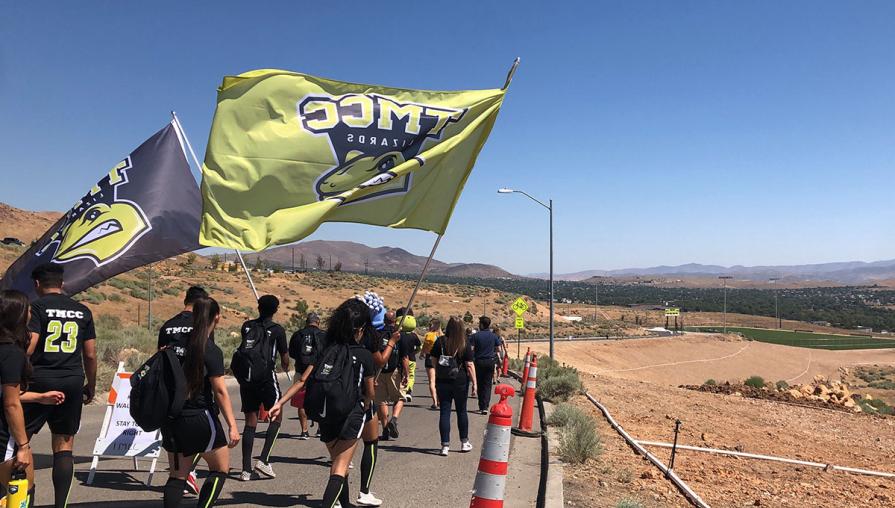 The official event, which included a ribbon cutting, would take place on the soccer field. 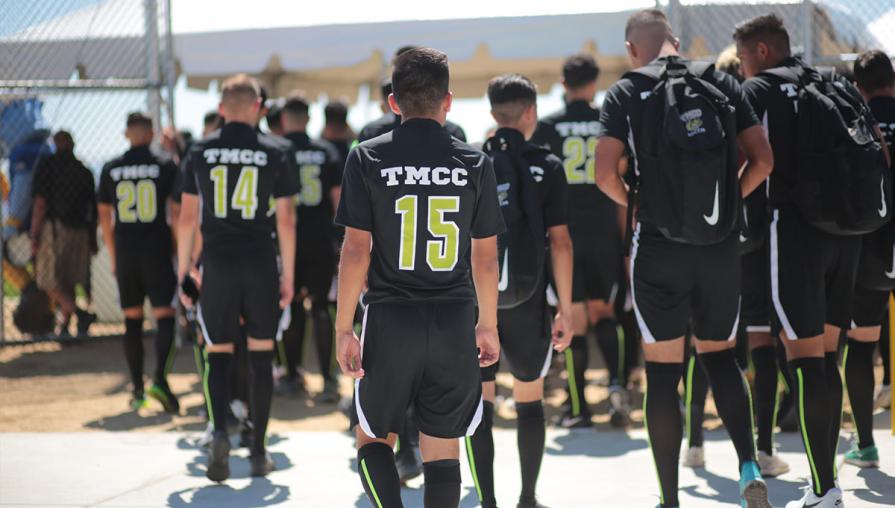 Student-athletes from both squads donned their team kits for the first time. 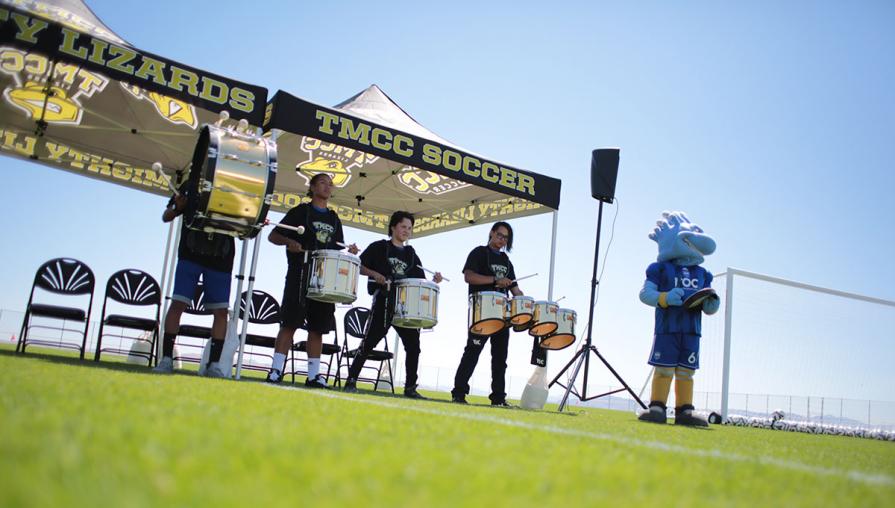 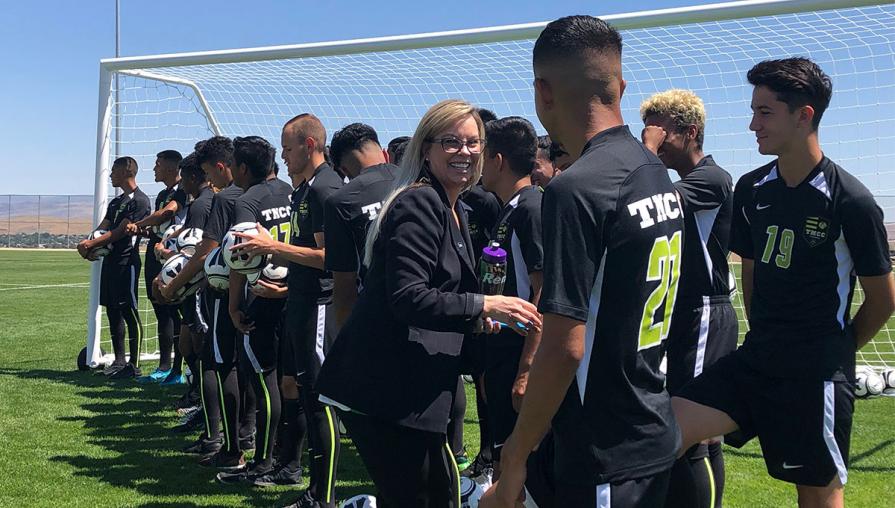 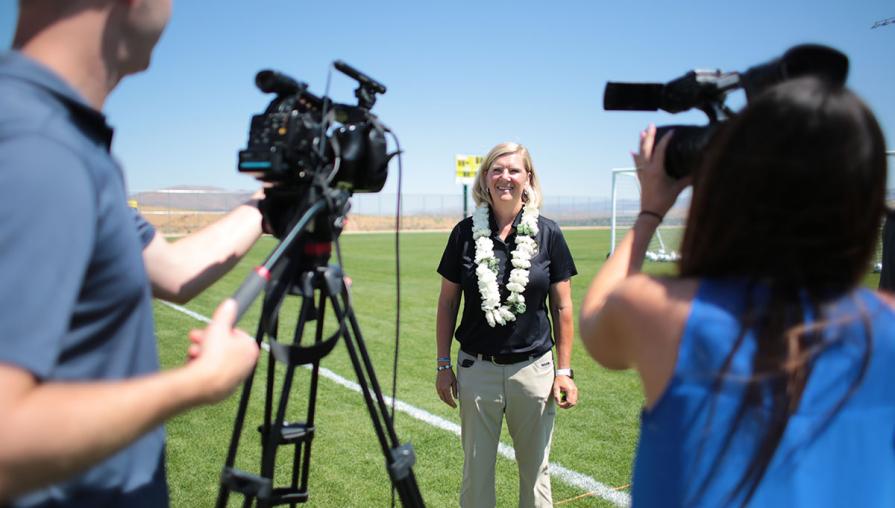 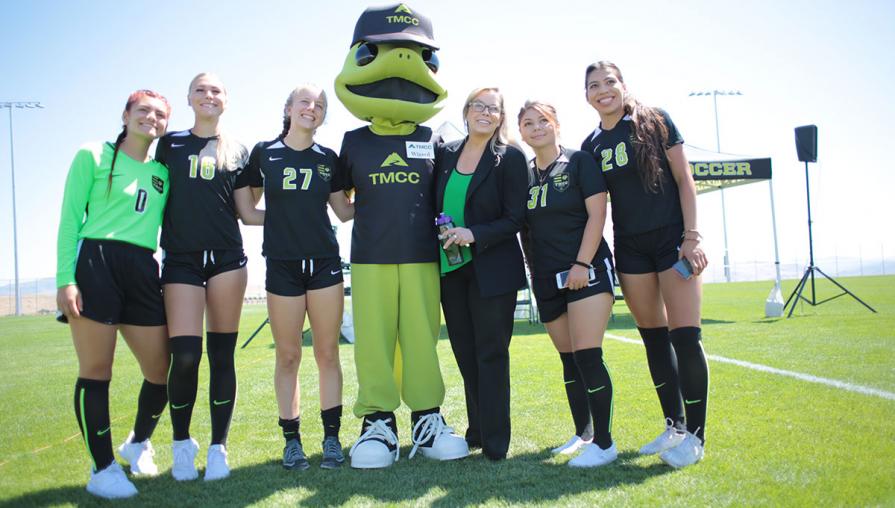 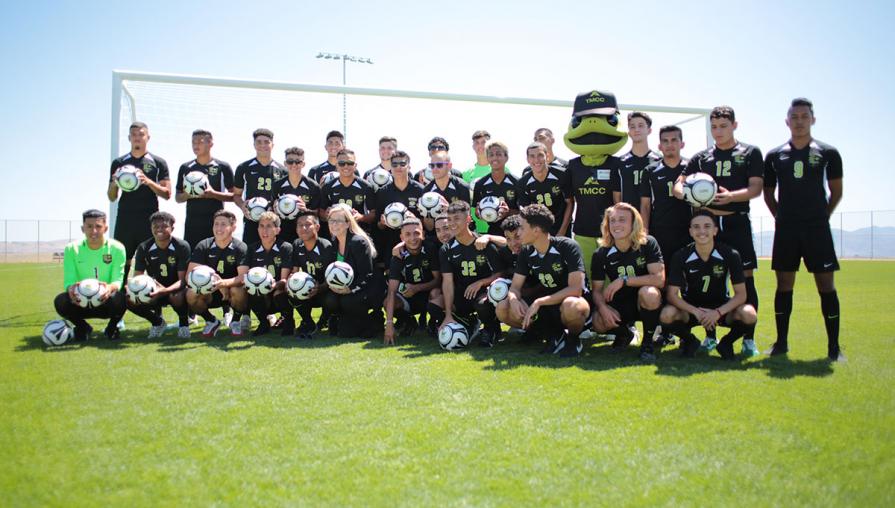 The TMCC Men’s Soccer team, with Mayor Schieve and Wizard. 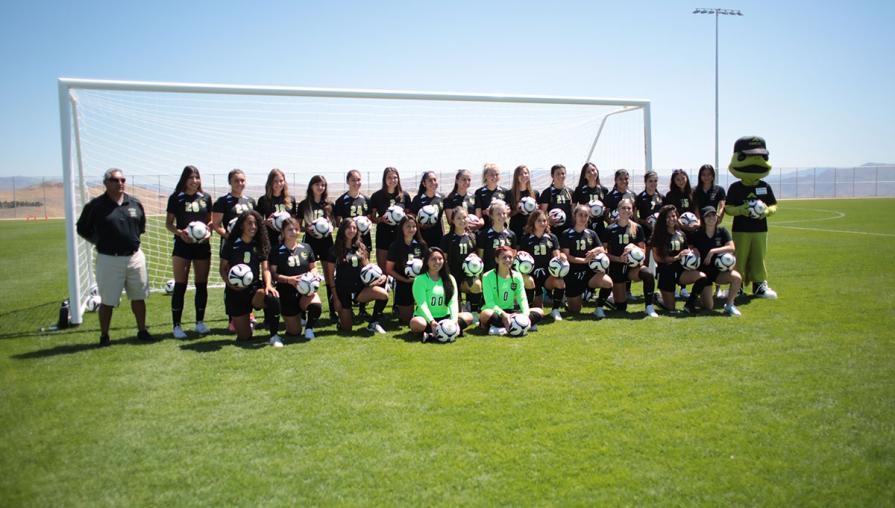 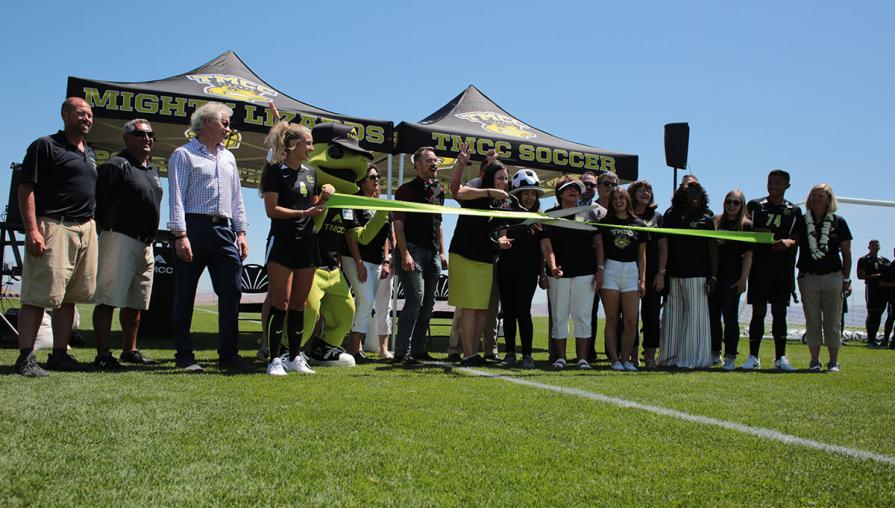