A Career in HVAC/R is Cooler Than You Think 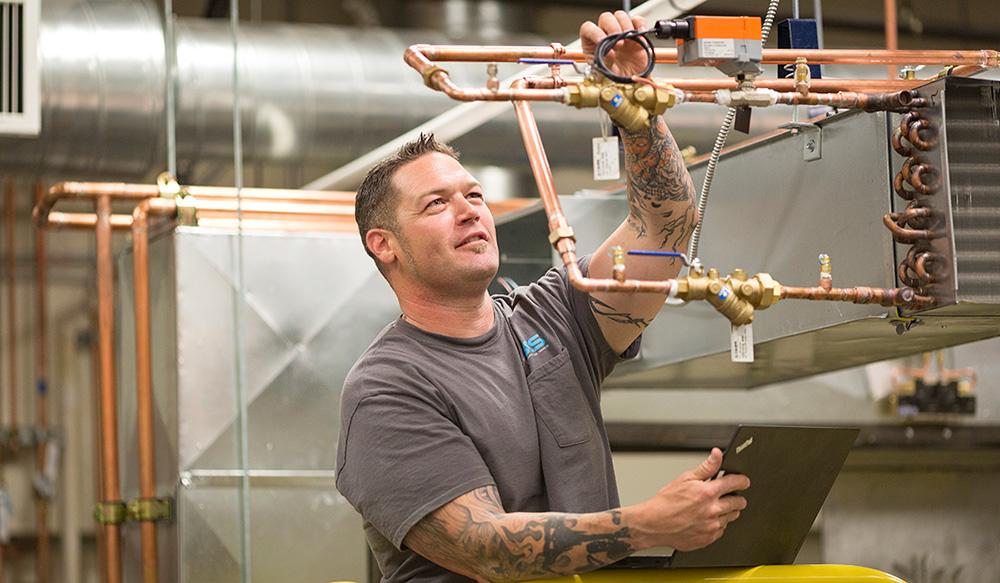 Kelly White graduated from TMCC’s HVAC/R program in Spring 2019 and describes his current job as one he wouldn’t trade for anything: “I’m always working on something new, trying to solve fresh problems on different equipment,” he said, describing what it’s like to work in this rapidly growing, in-demand and secure industry. This is definitely not the territory of the cubicle job (“unless I’m fixing someone’s air up there,” he joked.)

Do you like working in construction but wish your salary was higher? Or, are you interested in working with your hands, solving problems, learning how systems work but you aren’t sure where to start?  Keep your ducts in a row and join a rapidly growing industry that shows no signs of cooling off. HVAC/R technicians (which stands for Heating, Air Conditioning, and Refrigeration) who are responsible for installing, repairing and maintaining those systems are perhaps one of the best-kept secrets out there.

According to the latest report by the U.S. Bureau of Labor Statistics,  employment is projected to grow at a 15% average in the next five-ten years, which is much faster than the rate of growth for most occupations. Additionally, an entry-level technician (right out of school) in northern Nevada can expect to earn $18-20,000 per year, which is remarkable given that the academic preparation (the time you’ll spend in the classroom) is much shorter than your typical four-year degree.

What to Expect from the TMCC HVAC/R Program

White, who was working as a technician for frozen drink systems, decided to attend TMCC’s HVAC/R program so that he could learn about the refrigeration systems used in the equipment he was meant to service. “I loved the program at TMCC,” he said. “The schedule worked really well for me,” he said.

White, like many TMCC students, had a work schedule that would not enable him to pursue a program traditional academic schedule. Classes meet Monday through Thursday 8 a.m.- 1 p.m. (enabling you to work half days), with a schedule that puts you on pace to complete 30 credits in two semesters. Classes in the HVAC/R Accelerated program start on August 26, at the same time as TMCC classes on the regular academic schedule.

“I was kind of nervous about how that was going to go, but I had all the one-on-one time with instructors that I wanted,” said White. “Everyone was really helpful and the schedule format allowed me to learn on my own all the systems I needed to know about.”

If all of that didn’t convince you, then this might: 90% of TMCC Applied Technologies students are employed before they graduate.  “HVAC/R is not a job, it’s a career,” said HVAC/R Professor Wes Evans. “This field can be life-altering for people who love a good challenge and strive for excellence.”

White can attest to that. He’s not fixing frozen drink machines anymore. Since graduating, he works on “big systems” like the chiller plant for the 9,000 square foot Northstar Village Ice Skating Rink.  “I’ve rebuilt 12 cylinders that handle massive amounts of refrigerant. Or, I work in rooms full of equipment that do one thing—these are impressive and atypical systems—there are very few systems like them in the whole world. What the technology is able to achieve is amazing. I think working on that kind of machinery is fun.”

While HVAC/R is a hugely important part of modern life, it’s arguably also the most transparent. “When it’s working like it’s supposed to, you don’t even notice it,” White said. However, every public building from the library to the DMV has regulated building requirements down to the interior climate of that particular space.  “HVAC/R is happening all the time around you, but you don’t even realize it,” he said.

The advantages to the job are beyond the equipment, though. For White, working in the HVAC/R industry has offered him opportunities that he would not have had otherwise: “...It’s a super secure job and not at all repetitious. Every day is different. Sometimes, I’m on a rooftop and it’s a nice day outside and the views are great from up there. You also get to do a little bit of everything: plumbing, electrical, installation, troubleshooting—it really is like all the trades wrapped into one.”

For the scientific-minded and technically skilled, HVAC/R can offer graduates a dynamic career and a steady income for a lifetime.

If you’re starting to think that HVAC/R could be a pretty cool career, you should know that there are scholarships available for students interested in the TMCC HVAC/R program. These scholarships require only one application, can be used toward certificates or degrees and require that you enroll in at least six credits, with a minimum of a 2.0 GPA.  Specific scholarship awards are based on the number of credits in which you are enrolled. The following award amounts are per academic semester:

For more information about the TMCC HVAC/R program, contact Applied Technologies at 775-856-5300.