TMCC Alumnus to Give Keynote at Symposium 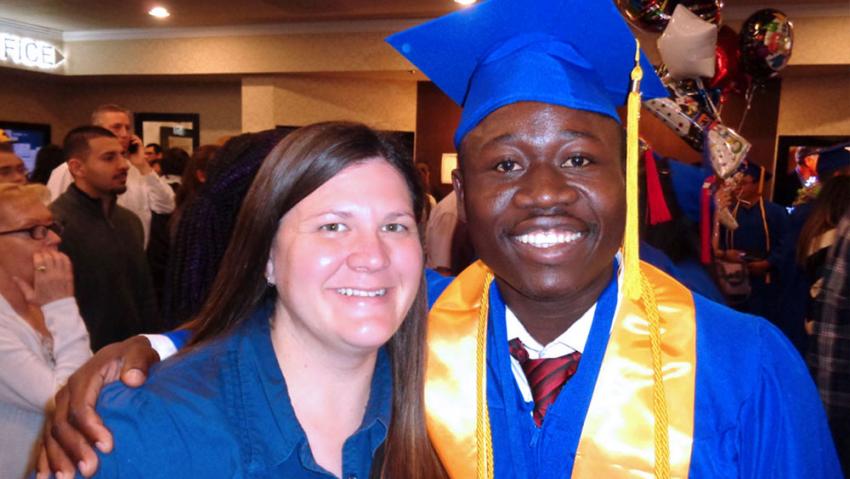 On the last Friday in June, twenty TMCC undergraduates will present their research and their work in bioinformatics conducted over the course of five weeks at the Bio Summer Research Symposium. The event, which begins at 9 a.m. on June 28 in Vista 206, will feature keynote speaker TMCC Alumnus George Mwinnyaa, who is currently working toward a Ph.D. at John Hopkins University.

Mwinnyaa’s Journey: from Ghana to Nevada

Mwinnyaa was born and raised in Ghana where education is expensive and without the perks we commonly associate with it (there are no computers, gymnasiums, libraries, cafeterias or even, at times, electricity). Mwinnyaa was a dedicated student. However, his family was forced to make many sacrifices, forgoing meals and other valuables, so that Mwinnyaa’s mother could pay his tuition. For the final national examinations required of all students, Mwinnyaa was only one of seven students in his school to pass all the test’s subjects—yet his scores (and the scores of the other six students) were not high enough for admission to the public universities in Ghana. He doubted that an academic future was for him.

Mwinnyaa began working in public health, carrying vaccines to rural villages, sometimes walking for miles to deliver them. Through this work, he met an American Peace Corps volunteer who would eventually become his wife. The couple would move to Nevada, and Mwinnyaa found work as a part-time custodian with the Lyon County School District.  When he learned that the Lead Custodian had a degree from a community college, Mwinnyaa began to wonder if taking another shot at education would lead to his promotion in his current career.

“I actually contacted TMCC first,” he said. “But they told me that I would need my high school transcripts. Without that, they couldn’t offer me admission. So, I got into WNC for one semester. Then, I was able to transfer to TMCC.”

He was excited to attend community college “...where I was going to meet nontraditional students like me, and where I could earn a degree that would help me move up as a custodian. I didn’t go to TMCC so that I could finish a 4-year degree, a Master’s or a Ph.D. My vision for my life’s trajectory was far from that.”

Mwinnyaa’s first semester was riddled with doubt. Would he be met with the same challenges he had faced back in Ghana where he barely passed the final national exam? When he received his midterm scores, they told a different story—they were all 90-100%, far from below average. “In fact, the first time I got my midterm scores back it was in a math class, and I believed the professor had made a mistake. I had never seen anything like that in my life. The self-doubt returned that school was not for me.”

Yet, several TMCC professors and advisors consistently encouraged Mwinnyaa to continue with his education, telling him that he could do whatever he set his mind to. It took a lot of convincing, but eventually, Mwinnyaa widened his scope beyond obtaining an associate degree to improve his custodial career.

“Dr. Laura Briggs was like a professor and a friend,” he said. “She looked out for me and exposed me to all the opportunities I could get at TMCC. She helped to get a grant so that I could do research with her. She took me to research conferences to present my work. She worked with me to build my confidence,” he said.

As a result of these opportunities, Mwinnyaa began to consider getting a Bachelor’s degree from UNR. He also applied for the Jack Kent Cooke Foundation Scholarship, which encourages and supports community college students to apply to top schools in their field of interest and for him, this was public health. His intention was to get the scholarship and attend UNR. In order to appear like a serious applicant for this scholarship, Mwinnyaa applied to the number one public health school—Johns Hopkins University as well as the University of North Carolina, Chapel Hill—the second best. He didn’t expect to get into any of these schools but wanted to show the scholarship selection committee that he was ambitious and serious about pursuing his passion at the best universities.

“I didn’t think I had a chance to get into any of them,” he said. “And if you look at the cost, the tuition was just insane. I was a new immigrant to America, I didn’t want to take out huge loans for school.”

He didn’t have to. Both schools offered him full ride scholarships. “I was so scared. I didn’t think that I would fit in or that I would succeed,” he said. Mwinnyaa made the decision that would change the trajectory of his life: with his three-week-old son, he would make the move to Baltimore to pursue a degree in Public Health at John Hopkins.

In addition to serving as Keynote speaker for the Symposium, Mwinnyaa will work with participating students in the days leading up to the June 28 event, helping them to prepare their poster presentations. “It excites me to spend three days with students who are like me—to come as a testimony that they can make it,” he said. “I want to bring them hope, to think higher and to aspire higher.”

In addition to sharing his journey with students, Mywinnyaa will also share lessons that he learned along the way.

Lesson 1: Never feel bad asking for help. “Back in Ghana, professors didn’t have office hours. And then, I came to TMCC—and I was so shocked when a professor had office hours that you had the liberty to come and sit with them one-on-one and learn. You have recorded lectures that you can watch again and again. You have the Tutoring Center where you can go and get help with any content you do not understand. How can you fail in such an environment? At TMCC, I told myself that every single student in this classroom is better than me. To get closer to where they are, I would have to put in 2 to 3 times the amount of work to master the same material. I never felt bad about going to office hours, going to the library or the tutoring center—later, this attitude prepared me to do really well.”

Lesson 2: Realize that attending a community college is an advantage. “There is the fear: if you go to a community college, that means you have failed, that you were not able to get into a four-year university or that you didn’t value education until later in life. Sometimes we have students who will think: I can’t get into Stanford, Hopkins, Yale or Harvard because I am at a community college and thinking like that dampens your spirit. And, it is completely wrong. These universities are very hungry for community college students because they are looking for diversity—you will be the most competitive student because of the diversity of thought that you bring. When I went to John Hopkins for the undergraduate program in public health, I shared my experiences as a nontraditional student from TMCC and they valued that perspective. I made a lot of friends of my professors. Plus, I saved over $100,000 by doing two years of my education at TMCC. My community college credits were fully accepted. You can go anywhere with a community college degree.”

Lesson 3: Don’t focus on your weaknesses. “It’s always easy to focus on one area of weakness—one semester in which you did badly, or a subject in which you are not as strong.  I wanted to apply for Ph.D. programs at John Hopkins and the University of North Carolina at Chapel Hill, but at one point I decided not to because of my GRE scores—it was below the percentile you need to get into those programs. I applied anyway, but I didn’t think I would get in. However, I was accepted into both programs as one of the top-ranked candidates in each. I wondered why my test scores didn’t impact me, but then I realized that the GRE was only one piece of the holistic puzzle: my application also included letters of recommendation, my personal statement, my transcripts, my GPA. Now I have full tuition and a stipend in this program. This made me realize that you should never get hung up on the one tiny thing you fail at—this was a lesson I learned the hard way. The GRE mattered, but it was not the whole story.” 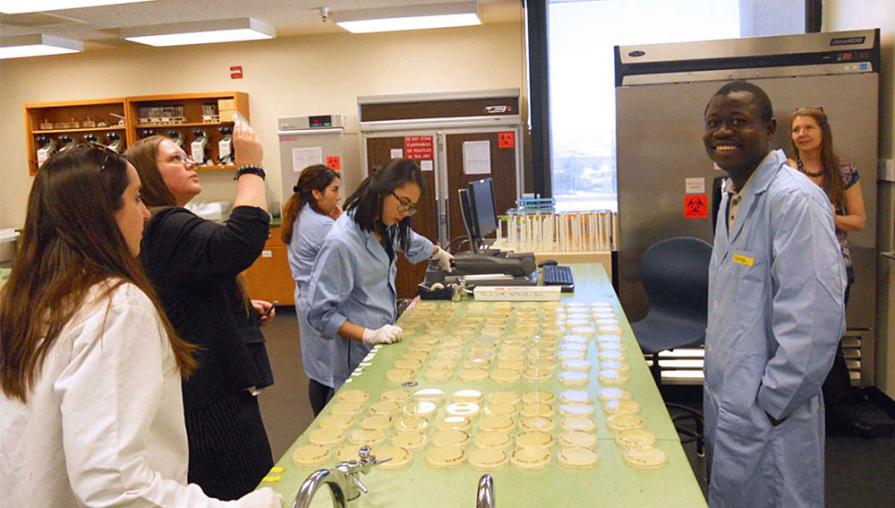 Mwinnyaa working in the TMCC bio phage research lab as a student. 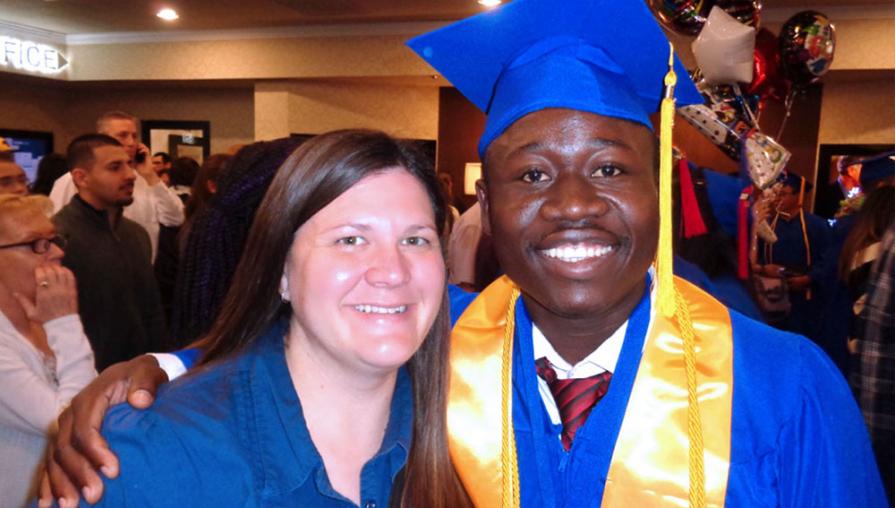 Mywinnyaa with his wife at his TMCC graduation in 2015. 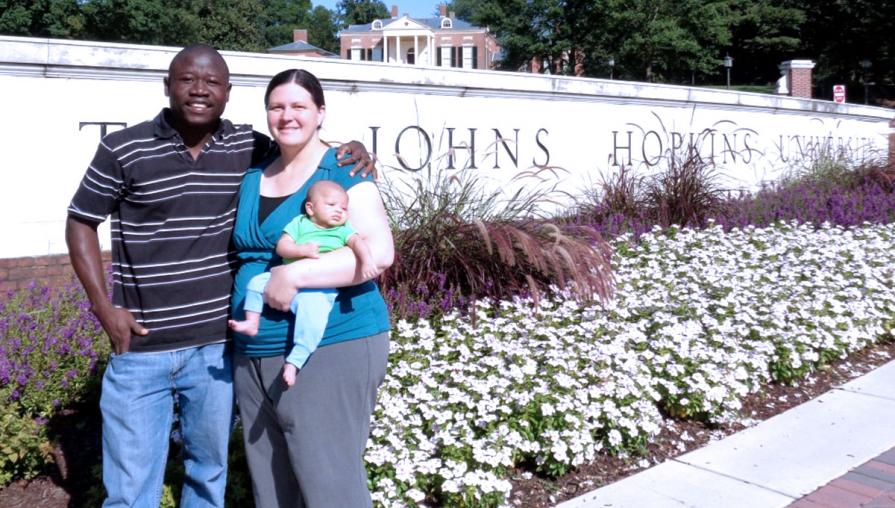 Mywinnyaa and his family’s arrival at Johns Hopkins University. 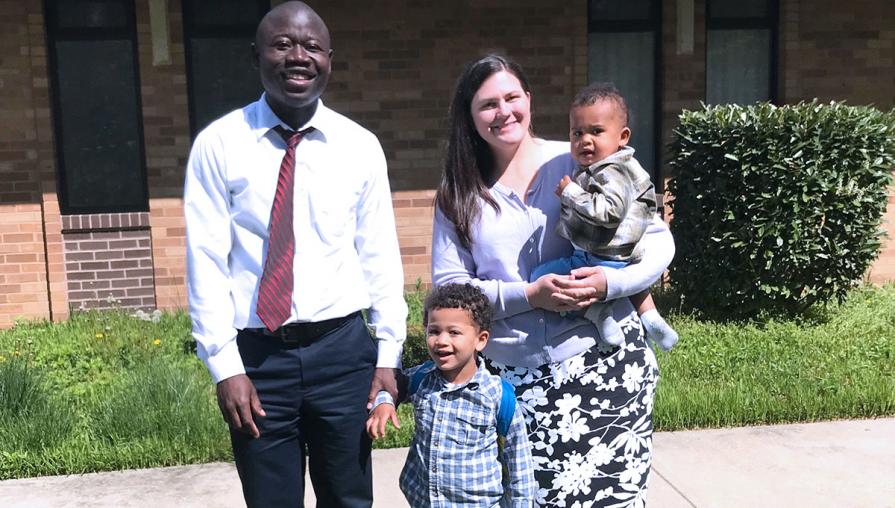