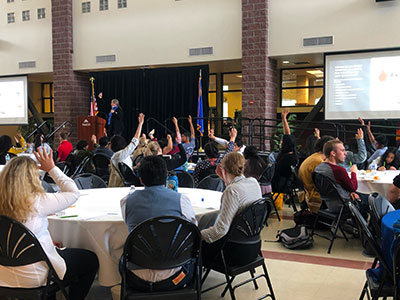 High school students from Washoe County came to TMCC for a special event made possible through a partnership with the National Security Forum (NSF) of Northern Nevada.

On Tuesday, May 21 nearly 150 high school juniors and seniors from the Washoe County School District (WCSD) came to the Dandini Campus to participate in “Youth Perspectives on National Security,” an event designed to teach them about critical issues facing society and our world. During the gathering, they listened to presentations on important national security issues including immigration, energy concerns, domestic terrorism, and cybersecurity, and provided their input about their concerns and ideas, which they had researched prior to the event.

The forum was the result of a partnership between the National Security Forum (NSF) of Northern Nevada, TMCC, and WCSD. Students from We the People, civics, and social studies classes also participated in breakout sessions that were moderated and facilitated by NSF subject matter experts and WCSD teachers.

“The National Security Forum of Northern Nevada is honored to be partnering with the Washoe County School District and Truckee Meadows Community College in sponsoring the inaugural Youth Perspectives in National Security Event,” said Dr. Maureen McCarthy, director of programs and commentary for the NSF. “Civic engagement among all age groups is vital to our national security. We salute the next generation of national security leaders from Washoe County who are participating in this event and finding their voices on issues vital to our community, nation, and planet. Diverse perspectives, informed discussion, and a commitment to stay engaged will make our community stronger and our country more secure.”

“TMCC is excited to host this important event where students develop an understanding and appreciation of key national security issues,” said TMCC President Dr. Karin Hilgersom. “Moreover, TMCC has made a commitment to take action to mitigate the effects of climate change and improve resiliency. In doing so, we improve the security for our community and our nation."

Students were welcomed by President Hilgersom, and heard a keynote speech—“Climate Change and Security”— from McCarthy, who teaches physics at the University of Nevada, Reno and also serves as program director for the NSF.

Following the speech, students had the choice to attend a variety of breakout sessions on topics that included Emergency/Natural Disaster Preparedness, Economic Concerns/Income Inequality, Climate Change, Immigration and Democracy in Crisis, among several others.

“Through this forum, students had the opportunity to learn about topics of national security that are of profound importance to their generation,” said Sarah Brown, social studies coordinator for WCSD. "They engaged in rigorous academic discussions that explored these topics and gave voice to student concerns and ideas.”

The National Security Forum of Northern Nevada was established by Dr. Tyrus Cobb in 2009 to promote discussion regarding critical national security issues facing the United States. Dr. Cobb served as a former special assistant to President Ronald Reagan serving on the National Security Council staff. The NSF is a non-partisan educational organization believing in vigorous, open, and balanced discussion and debate on vital questions affecting all Americans.