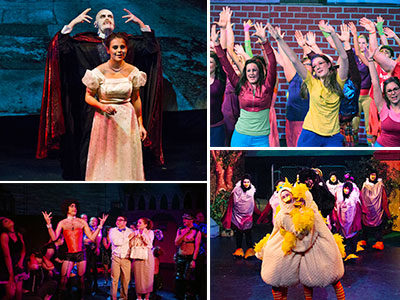 Since 1992, TMCC Theater has reached audiences through moving performances while elevating student participation and growth.

TMCC Theater student Kevin Wycoff, who performed in the Spring Dance Concert “What’s in a Name?,” is also a student worker for the Theater program, and finds himself most at home here, no matter if it’s on the stage or backstage. “I was born to be in the theater, it’s like my second home,” said Wycoff, who cites lessons like character development, stage makeup, welding and lighting among the skills he has mastered thanks to the TMCC Visual and Performing Arts Program.

Soon, big changes are on the horizon for the program. Since 2002, TMCC Theater has called the Nell J. Redfield Performing Arts Center home; this semester, though, marks the end of an era of over a decade of theater, dance and musical performances. When the curtain falls on May 7 following the Annual Spring Music Concert, the performing arts will enter what longtime Theater faculty Carolyn Wray calls “a period of metamorphosis.”

“The Performing Arts department has gone through many phases,” she said. “This is yet another one.”

The Theater program began in 1992 when Wray was hired as a Part-time Instructor in the new department. She would eventually become full-time faculty and was a part of the early growth of the program.

During this period, the Theater program was located in what is now the back of the Culinary Arts kitchen in the Red Mountain building on the Dandini campus. “It was Red Mountain 218, which isn’t there anymore,” said Wray. The main focus of the program at that time was student education, which combined general education with acting classes. Productions for each academic year typically featured four productions that included a straight play (a play in which actors act and there is no song or dance), a children’s play, a musical and a dance concert.

“We were very flexible—we would do whatever the students needed or wanted,” said Wray. The literal theater at Dandini was a room similar in structure to Sierra 108. “Every year, we would have Facilities help us to take out a row of chairs, so we could extend the stage,” Wray said. While the first production ever was “One Flew Over the Cuckoo’s Nest,” she remembers the “MASH” production, which transformed the entire space into 4077’s Mobile Surgical Hospital Unit.

This was an era when anyone who was over the age of 65 who was also a Nevada resident could receive free tuition. “We had a huge cast of vintage players, and we made it into a touring program,” said Wray. “They would do plays all over Reno and Sparks in nursing and retirement homes.”

On September 19, 2003, The Echo (the TMCC newspaper) ran the headline: “New Theatre Starts with Success,” celebrating the opening of TMCC’s presence in the new space:

It takes talent to pull off a Sondheim production by the theatre group opening the newly renovated Nell J. Redfield Performance Arts Center made it look easy Friday night. “A Funny Thing Happened on the Way to the Forum”… was the grand opening for the new Truckee Meadows Community College theater facility.

The show, which combined singing, dancing, and acting, would usher in a new era for the Performing Arts program that, in the words of Paul Aberasturi, would enable students and the community to “be a part of it. Thanks to a generous contribution from the Nell J. Redfield Foundation, the Theater was able to open in a new and expanded location in town and was renamed the Redfield Performing Arts Center (RPAC).

This was also an era when TMCC Theater was especially well-known for its musicals: “We used to do two musicals a year. That was for about 9-10 years when the University wasn’t doing musicals, so we filled a void in the community,” said Wray.

An increased number of faculty enabled the program to serve more students and therefore, to grow. The increased number of ticket sales from multiple events also resulted in growth in the program’s technical capabilities. “Shows like ‘Sweeney Todd’ and ‘Rocky Horror Picture Show’ would sell out and enabled it to really be a self-propelled program. We moved to digital LED lights that use less energy, upgraded our sound system so that we were following the industry standards,” said Wray.

The location, too, enabled the program to grow. “In the past, Dandini was considered ‘far’ away from the community,” said Wray. Bringing the theater to a location on Keystone to a place with easy parking literally brought the theater closer to the community, which helped to grow a dedicated audience.

“A theater is a world onto itself. When it’s buzzing, it is amazing. It has an excellent feel to it, almost a homelike feel,” said Wray. TMCC Theater continued to thrive during this period, but the focus on musical productions waned. Nevertheless, the program performed well-known plays such as “Hair,” “Jesus Christ Superstar.” “Spamalot,” “The Producers,” “Guys and Dolls,” and “Urinetown.”

As students and faculty changed (Wray herself retired in 2016), the program evolved aesthetically but remained true to its central goal of igniting student’s passion for the performing arts—whether that be through acting, dancing, or working behind the scenes. Ty Hagar, who is the Technical Director for the program, has been the program’s constant. “One of our strength is the technology that has incrementally been building, and the person with that vision has remained in place,” said Wray of Hagar’s longtime service since 2003.

There’s no arguing that there is something magical about live theater. “There’s an electrical connection between the performers and the audience,” said Wray. It’s spontaneous, it’s cathartic, it’s an experience that simultaneously invites human connection and self-reflection. The space in which the performances transpire holds this energy; the Redfield Performing Arts Center certainly hosted performances that changed the lives of students as well as those in the audience.

Yet, as the curtain falls, TMCC Visual and Performing Arts is preparing for its next act.

The next 2–3 years for TMCC Visual and Performing Arts have been plotted. The program will utilize other theatrical venues until a more permanent home will be built or established. “This fall, we’ll collaborate with Damonte Ranch High School and Reno High School,” said Wray. Additionally, Theater Instructor Stacey Spain will direct a Children’s Theater touring company that will visit Washoe County schools and perform for them. The dance program will produce a musical/cabaret in the fall and tour to high schools in the spring.

“It’s going to be like the rise of the phoenix,” said Wray, citing the legendary bird that rose from the ashes of its own funeral pyre, renewed. “We’re going to lay low and start rebuilding. Then the program will be full-force. What will be missing during our dormant times is a space dedicated to the performing arts.”

Plans for a new building on the Dandini campus that will be, in part, dedicated to the performing arts (tentatively named the East View building)—will enable TMCC's Performing Arts to remain true to its roots in helping students like Wycoff learn lessons through embodying characters, creating props and scenery and working the technical side of the house. “Theater is all of me,” said Wycoff, who looks forward to continuing his development as an actor, dancer and technician through the program’s ongoing evolution.

For more information about TMCC Visual and Performing Arts, contact the department at 775-674-7610.