2019 Commencement by the Numbers 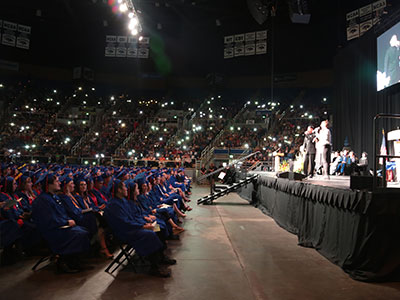 While it might be impossible to count the number of tassels turned last Friday, May 24 from the right to the left at the TMCC Commencement Ceremony (or the height to which some of the graduation caps flew in the ceremony’s final moments), we kept track of the impressive achievements of our students. In addition to honoring graduates aged 17 to 72, 2019 was also the year that the first Nevada Promise Scholar received a college degree.

The Class of 2019 boasted impressive numbers: of the 1,120 graduating students in 2018–2019 academic year, a total of 1,428 degrees and certificates were awarded (which included 5 Bachelor’s degrees, 1,281 Associate degrees and 142 Certificates of Achievement.)

The graduates who attended the graduation ceremony were as diverse as their degrees in terms of their ages, experiences, and countries of origin. Here five quick fun facts about our 2019 graduating class:

The 2019 Commencement Ceremony also honored graduates, alumni, and faculty for their academic excellence and dedication to our institution’s mission. 2018–2019 SGA President Ahitzry Vasquez was named Regent Scholar of the Year. Construction and Design Professor Kreg Mebust accepted the TMCC Faculty in Service Award. English Professor Joshua Shinn received the TMCC Faculty Excellence in Teaching Award and Windi Altemeyer, TMCC Alumna of the Year, was recognized for her contributions to TMCC and her achievements in the Reno, Sparks, and Fernley communities.

Close to 500 graduates attended the ceremony at Lawlor Events Center and were surprised by a social wall that featured pictures that they tweeted of their graduation memories with the hashtag #TMCC2019 in the hours leading up to the ceremony. There were 276 posts made by our students and staff, which earned 82.8 K impressions—setting a local social media trend.

The highlight of the ceremony was, perhaps, the performance of the song “A Million Dreams” from The Greatest Showman which turned the dark arena into a city of dancing lights (the flashlights from cellphones from those in the audience) which illuminated the dark hall like stars. The lyrics: “However big, however, small/Let me be a part of it all/share your dreams with me.../A million dreams for the world we’re gonna make” spoke to graduates and faculty alike, including TMCC High School Principal Melissa Olsen who tweeted: “Not crying! You’re crying!”

We are proud of our graduates and look forward to hearing of their future successes in their professional fields and in serving their communities. While the sounds of Pomp and Circumstance may fade into the summer months, a certificate or degree will certainly last longer.