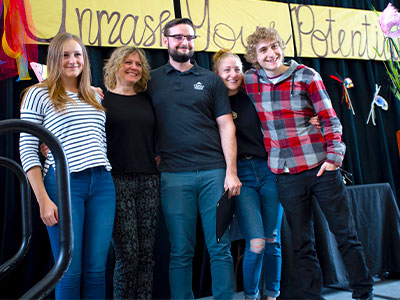 Masks, feathers, and beads: the Student Employee of the Year Awards Luncheon followed a Venetian Carnival theme with the tagline: “Unmask Your Potential through Student Employment.” The annual event, which has been happening for over a decade, has far outpaced its humble beginnings: thanks to the Culinary Arts department, there was not a pizza box to be found (a detail Event Coordinator Valerie Lambert remembered from the inaugural luncheon, years before.)

Instead, the fully catered luncheon featured salads and a large selection of dishes ranging from pasta to egg rolls. The event, held in honor of the student employees whose positions enable the college to continually meet its mission, was successful in doing exactly that.

Of the ten nominees, Joshua Gauntt—who has worked in the Information Technology (IT) department since December 2017—was named TMCC’s Student Employee of the Year. Gauntt enjoys working in this particular field for the wide array challenges it offers him. “I appreciate workplaces where I have to constantly adapt and problem-solve,” he said.

Gauntt, who served for six years in the military specializing in communications, finds similarities between is work there and what he does at TMCC. “I appreciate the flexibility of the position,” he said. “My department works around my school schedule. It’s also great to get real work experience while pursuing my degree.” Gauntt, who will receive his Associate degree in Computer Science in fall 2019, plans to transfer to UNR to work toward his Bachelor’s in Science, also focused on Computer Science.

Though only one student can be named Student Employee of the Year, all student workers are encouraged to attend the Awards Ceremony. Indeed, nearly every department attended the Award Luncheon in honor of their student worker or workers.  Beautiful feathered and sequined masks adorned every table, and every student worker was honored with a gift box containing gifts sponsored by Financial Aid and Auxiliary Services.

2019 Student Employee of the Year Nominees

Cassandra Much, Counseling/Re-Entry
Nominated by: Camille Vega and Cameron Tuttle

For more information about Student Employment and Work Study, contact the Office of Financial Aid at 775-673-7072.