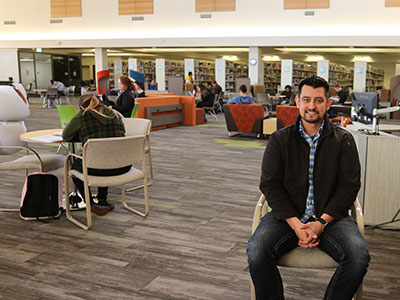 English Instructor Joshua Shinn discusses the need for critical thinking and how an English degree can take you around the world.

Joshua Shinn might be an English professor in the 21st century, but the key to understanding his teaching, writing—and life—follows two approaches with roots in the 19th century to understanding yourself and the world:

Shinn, who teaches English courses at TMCC, said that in today’s world “image is huge.” He’s referring to our visual culture, or the way media is tending away from the written word and leaning on the impact of what can be “read” (or understood) by an image or meme. This is important, he says, because image is argument. For Shinn argument—as a form of persuasive expression—is the key for developing not only the ability to think critically, but also to develop a real sense of self.

Visual literacy—along with literal literacy with a large dose of critical thinking—is the focus of his classes, particularly English 101, that have been restructured around the idea and practice of argument. This approach departs from traditional college writing classes that focus on several rhetorical modes. “Because of our political climate in the last ten years,  the Argument paper shouldn’t be the last paper that students turn in and walk away from. Instead, students should have to analyze, revise and come face-to-face with their thoughts and beliefs, and understand the origin of these ideas,” he said.

Students in Shinn’s classes read texts like Aristotle’s Rhetoric, Sun Tzu’s The Art of War, and more contemporary sources, such as Vincent Ryan Ruggiero’s Beyond Feeling: A Guide to Critical Thinking. “The ability to analyze one’s beliefs, biases and opinions is a part of the process of knowing yourself. And, isn’t that the point of education?”

His approach harkens back to classical education, which expected students to learn about the world and their place in it, as well as to explore and compare ideas in search of the best ones. “Today, we use education as a means to an end,” he said. “We want to get the degree to get the job. But, I want students to think about themselves, and their place in all of this.”

This is work Shinn endeavors to do himself; a kind of self-examination and revision process rare in the days of social media when opinions are formed with a Facebook post or a tweet into the anonymous void of the web. He quotes Paulo Freire: “My students are not a flotilla of boats trying to reach the teacher who is finished and waiting on the shore. The teacher is also one of the boats. I’m out there with them, like a college student who never left college.”

An English Degree Can Take You Around the World

“Honestly, I never had a point on the horizon I felt like I was navigating toward,” said Shinn. “Some people have a dream of being this thing, and every waking day is inching toward that goal. I never had that—mainly because I had a fractured family.” As a high school student, Shinn was living in Southern California “hanging out at the beach” until a mentor encouraged him to go college.

Shinn received a B.A. in Liberal Studies (“the degree you choose when you don’t know what you want to choose”) that led him to apply to graduate school. He chose to focus on Rhetoric and Composition, a discipline Shinn describes as: “where theory meets practice.” It was a field he fell in love with.

Yet, this is where the story gets interesting: Shinn found an ad on Craigslist looking for qualified English instructors willing to teach overseas for the PACE Navy College Program. Shinn was one of the few applicants qualified for the job that not only required an academic degree but passing several background and physical fitness tests.

When he was teaching for the Navy, Shinn lived on aircraft carriers like the U.S.S. George Washington, as well as a couple of Destroyers (smaller ships). At some point, Shinn sailed around the Mediterranean. “I loved it. I still miss it a little bit because of the travel and working with the sailors. That was a highlight and an honor,” he said.

He admits the secrecy of his travel arrangements was hard to get used to. “They would tell me to be ready to travel on April 1. But, I had no idea where I was going. Then, the night before, they would tell me I was going to get on a plane to Singapore, and that I’d meet a ship there. At that point, I’d pull out a map, looking for where Singapore was, so I’d know what to wear. It wasn’t culture shock per se, because I’m used to being around a lot of different people. Instead, it was the ‘by the way, you’re going to Yokosuka in 48 hours,’ and I would have to ask: ‘where’s Yokosuka?’”

Shinn also remembers, after spending weeks on a ship at sea, missing the color green. “You go outside and all you see is ocean—everything is gray and blue. It’s neat at first—and the expanse of it is impressive—but you get to the point where you don’t even see birds because you’re so far out there in the ocean, there is nowhere for them to go.”

Although Shinn relies primarily on classical texts, his methods to make these sources accessible to students is anything but antiquated. Often, he introduces students to the work of Joseph Campbell, particularly the archetype of the hero. “The hero’s journey is the one that everybody takes—in fiction or nonfiction,” he said. He cites several examples: DC and Marvel comic character Thor, the classical figure of Thor, Frodo Baggins and even Jesus Christ.

“[The hero’s journey] starts with this call out of what’s comfortable, like Frodo being called out of the shire, Christ called from his life as a Carpenter, or a person going to college being called out of their home and into this new space that is uncomfortable. Everyone has this ‘call’ and then there’s a challenge, and typically you need help overcoming it along the way. At the end, you return home and you share what you’ve learned.” The hero’s journey is, in Shinn’s words “a cyclical journey” that everyone can recognize because it describes the universal experience of facing the unknown, and overcoming challenges. “It makes stories accessible and everyone else becomes relatable to you because we are all doing the same thing. We just wear different masks.”

Shinn also relies on modern forms of expression to emphasize literature’s sometimes obscure relevance to today’s world. In a class focused on 19th Century transcendentalism, Shinn asks students to not only write an essay based on their understanding of authors like Thoreau or Emerson, but then to create a visual representation of their essay that they then present to the class. “The easiest route is PowerPoint,” he said, “but students can create a YouTube video or they can meme it, for example. I’ve learned that this helps them conceive of the knowledge in a different way.”

Pairing modern media platforms with texts created long before such media was even imagined pulls thinking into modernity, and creates links by which Shinn’s students begin to see history in terms of influence and evolution. “By doing this work, students see how Thoreau impacted John Muir, and how John Muir impacted Teddy Roosevelt. And, Teddy Roosevelt started the National Parks, and Yosemite is just down the road...and then what happens is that Yosemite becomes the image that is Thoreau, his transcendentalism and his love of nature.” Using images in this way turns what is necessarily abstract (language and philosophy) immediate, tangible and understandable.

Ethics and Why We All Need to Go for a Walk

Shinn also uses his skills as an educator—and writer—to help the world become a better place. He writes for Reno Dad’s Blog, a local platform that provides articles on topics that span parenting to human trafficking with the goal of offering a resource for readers to become more informed members of our community.

“It’s a local community blog started by two guys, Dave Bradfield, and Mike McDowell, who wanted a forum for other dads in the area to work out their ‘dad-dom.’ I thought it would be helpful to have this communal effort to hash out important topics. I write about serious things, and light things-- all with the goal of trying to be a better father and person.”

His participation in Reno’s Dad’s Blog is driven by a similar inquiry that has led him to the conclusion that he wants to set a positive example in the world for others. “A big part of argument in ancient Greece was ‘ethos’—ethics, character, integrity—who you are as a person,” Shinn said. “What you do—who you are—determines if you are worth listening to. I should be worthy of respect minus my degree or my institutional position—but instead, because of my character. Those things matter and they aren’t just things I teach, they are things I model and implement in my own life.”

There’s no question that the world today is a noisy place and one that requires a certain degree of critical thinking skills and self-awareness. Shinn also thinks it’s a place where it’s a good idea to take a walk. “One of the best ways to understand a place is to walk it. If you want to see Rome, don’t take a taxi from the Vatican to the Colosseum. In walking through spaces, you get an intimate feel for them.”

The Western U.S. expresses unique challenges to walking—mainly its expansiveness—yet Shinn, an avid hiker, finds value in walking in the woods. “Emerson in his essay ‘Nature’ wrote: ‘In the woods, we return to reason and faith.’ I think that’s accurate. In the woods, you find your ability to think clearly (reason) and your ability to have faith (in God, yourself or even in creation itself.)”

The Sierra Nevada—where John Muir famously sought refuge from an incoming wind storm by climbing a Douglas Fir—is where Shinn escapes the noise of our world. “We’re inundated with noise,” he said. “It’s not until you can return to the original state, with silence, that you can think clearly.”