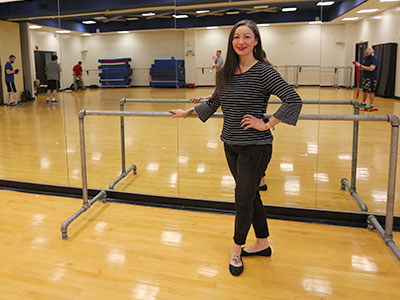 Dance is unique in the Performing Arts world, combining physicality with history and philosophy in a way that results in creative expression that is as impactful as it is wordless. “Students are always amazed by the difficulty and the initial elements that make refined theatrical or concert dance,” said Dance and Human Movement Instructor Dayna DeFilippis. “But, even social dancing has that level of refinement. It’s all about igniting that passion and realizing how deep the history of dance is, and how relevant it is to other aspects of life.”

DeFilippis started as a full-time instructor at TMCC in the fall of 2018. Among her many duties, DeFilippis has organized and clarified classes in order to build a cohesive curriculum. She is also re-instituting concert dance performances at TMCC. Students who participate in DeFilippis' classes are diverse: some students want to become professional dancers, while others dance for health, or even just for fun. “Whatever avenue of dance my students decide to do, it’s always worth it. Dance shapes them in unchangeable ways,” said DeFilippis.

A lifelong dancer, DeFilippis was drawn to dancing because it was not only good for her physically and mentally, but that she made lasting bonds with her teachers and fellow students. Yet, dance also helped her to make an important discovery: “...I realized something else about myself by being able to perform without having to speak. I could share my experiences with an audience in a way I could feel confident in.”

Shows like So You Think You Can Dance, America’s Got Talent and Dancing with the Stars suggest that dancing is a highly specialized skill performed solely for the purpose of entertainment—something that isn’t quite true. “All those shows have given such great exposure to the art of dance and physicality of dance, but it’s important to remember that every person has a physical body and we use that to express ourselves and communicate,” said DeFilippis.

Dance 101, aka Dance Appreciation, begins with the premise that the purpose of dance wasn’t entertainment, but rather, communication. In fact, dance is one of the oldest forms of communication known to man. DeFilippis has even instituted “movement days” to break up a class that is, traditionally, composed of lectures.

“Sometimes you just have to do it to understand it,” said DeFilippis. “We have all these cliches about this idea: ‘actions speak louder than words,’ ‘the importance of body language,’ that ‘you can speak volumes without uttering a single word’... this connection [between body and expression] forms the basis of dance and makes it universal.” Getting students to move helps to ground this idea in a lived experience.

Like any communication method—or language—dance has an internal logic. Its grammar, called “choreography,” demands creativity and a grasp of dance’s technical elements: the body (aka the physical person), how the physical person is moving through space and how the changes in time and energy interact with the actions of the body. “It has to start with an idea first,” said DeFilippis. “And then you create movement that is expressive to the individual. And then you step back and evaluate it, [always] asking: what am I trying to say?”

This communicative impulse continues until the dance is performed—at which point, “it’s no longer yours, it becomes the audience’s,” said DeFilippis, whose description underscores the instantaneous and ephemeral nature of movement. “Dance is very in the moment... and about being present with others.” Even the musician and the playwright have tangible evidence of their art that lasts well beyond the moment in which they are performed: dance, instead, is created and lasts until the stage lights dim.

The Spring Dance Concert—which is happening April 26, 27 and 28—borrows its name from lines from Shakespeare’s Romeo and Juliet “What’s in a Name?[...] A rose by any other name would smell as sweet.” DeFilippis said the idea for the concert came from her experiences at a summer Fine Arts Camp where she was an instructor. “I spoke with a lot of students who were struggling with identity, family and self-expression issues, and I was really inspired by their courage to tell me about it, and by the non-judgmental and universal acceptance of them by their peers.” This begged large, important questions about identity (both personal and social), equality, social justice/injustice, and relationships—questions that she wanted to share with her students at TMCC.

"What’s in a Name?" will feature nine individual pieces with their own particular aesthetic that, when combined, tell a larger story about the concert’s themes. “From beginning to end, these large themes are touched upon in each dance, there is an overall story that is being told,” said DeFilippis. Through these varying perspectives and aesthetics, the dance itself will hint at the need for the audience to embrace empathy and understanding.

The concert is multidisciplinary, incorporating the skills from Performing Arts students who will run sound and projection, Graphic Communications students who have designed the marketing materials, and who will document the production with still shots and video. There is even a composer creating original music. “These are my favorite things about producing a dance concert—we can really involve artists of all disciplines,” she said.

Future of Dance at TMCC

This is an exciting moment for the dance program, which has enough rigor to propel an aspiring dancer into the profession while offering information and exercise that can benefit just about everybody. “My classes strike the balance between doing the physical work and discussing why the physical work is the way it is and how both help us in the grand scheme of life, in dance and as an art overall,” said DeFilippis. The classes, at the very basic level, provide students with a toolbox that enables them to know the steps of making their own art.

Because dancing structures movement, it also structures the way you think about movement. “I help my students to realize that the body they have is completely valid in and of itself,” said DeFilippis who admits that she thinks every college student should take a dance class—but not for the reason you might expect. “Dancing puts students in touch with their own physical bodies in such a way that I think they would disrespect other people less. Because, when you dance, you have to be very in touch and very appreciative—knowledgeable—with your own physicality, and that shapes how you interact with other people’s physicality.”

It goes back to the idea of communication that was, long ago, an elemental part of the human experience. “If we forget that, we lose our connection with ourselves and with others at that basic level,” said DeFilippis. By dancing, then, we can re-discover ourselves.