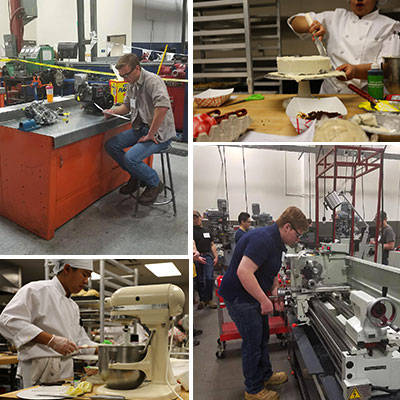 Every year sparks fly from welding wands while engines rumble and the sweet baking-smells waft through the campus and learning centers of TMCC for a competition called SkillsUSA. The event is a sanctioned skills competition for students working toward degrees—and careers—in technical, skilled and service occupations.

Nationally, SkillsUSA has served more than 10.5 million members (including students and advisors), who are then organized into 54 state and territorial associations. Nevada hosted its SkillsUSA Leadership and Skills Conference last week, April 10–12. The event engaged TMCC students currently enrolled in the Culinary, Technical Drafting, Welding, Machining, Automotive, and Diesel programs through competitions that tested their skills and abilities.

Culinary and Commercial Baking at Dandini

On the Dandini Campus—which hosted two SkillsUSA Competitions in Culinary and Commercial Baking—Culinary Arts students donned their chef whites in the culinary and baking labs first thing Thursday morning, in what resembled a re-enactment of many of America’s popular cooking shows. Students rushed between stations, locating ingredients, turning up and down the heat of ovens and burners, furiously mixing the batter, stirring pots all in the effort to produce a perfect dish.

Culinary Arts Instructor Karen Cannan weaves herself into the scene, offering advice to students. Cannan, who has served as an advisor and coach for the SkillsUSA competition for the past 18 years, has watched the competition elevate students skills and ability to work under pressure. “Our students are dedicated and hard-working, and that mixed with being so skilled allows them to succeed, said Cannan. “ It is excited to see them all accomplish their goals competing in SkillsUSA.”

For hours, the TMCC kitchen churned out salads, main dishes, pie crusts, cookies, and cakes iced and decorated to perfection that were placed on tables lining the hallway of the Red Mountain Building and Student Center. TMCC students placed in both, where Lesia Gandolfo earned a gold distinction in Commercial Baking and Amanda Kroupa won the gold in Culinary.

The top twenty high school students in Nevada competed in Automotive Diagnostics and Repair. The entire staff for the TMCC Automotive program assisted in the setup and running of the contest.  Community partners also played a vital role in the event by donating cars upon which the contestants worked and by acting as judges at each station. “Students were able to demonstrate their skills and talk to local business owners about their future plans in the automotive industry,” said Sam Byington.

TMCC Drafting Student Nicholas Schaffer took Gold in the Drafting competition, which was held in the basement of the Silver Legacy. “I was given a set of blueprints that needed to be modified,” he said. “And then, I had to add dimensions for both 2-D and 3-D drawings.”  Schaffer, who has a fascination for understanding how and why things work, enjoys drafting because it allows him to have a firm grasp on the design and function of objects.

Brandon Hlade, who won Gold in the Welding Competition, was tested across six different types of welds, a mock job interview, and a written test. "It was really, really fun," said Hlade. "I met a lot of cool kids who were competing at the high school and college levels." Hlade, who is working toward his Associate degree in Applied Science with a focus on Welding, welcomed the challenges presented by the competition.

In June, both Schaffer and Hlade plan compete in the SkillsUSA National Competition. “It’s going to be even more challenging,” said Schaffer. “There will be 51 competitors—one from each state and another one from Puerto Rico.” Both students are working with their instructors—Brian Ruf in Drafting and Scott Holcomb in Welding— to help them prepare for more difficult challenges.

"[SKillsUSA] sent me a big binder with projects from 2008-2011," said Hlade. "These are the kinds of projects I might encounter." Both students are practicing so they are ready for Nationals.

Congratulations to all TMCC students who participated in the 2019 SkillsUSA Competition. Nicolas Schaffer and Brandon Hlade (who won Gold in Technical Drafting and Welding, respectively) will be traveling to Louisville, Kentucky for the National Leadership and Skills Conference on June 24–28.

We would like to thank our community partners for help and participation in the event.

For judging of contest stations:

Special thanks to Sam Byington, Paul Seybold, Wyatt Ziebell and Jack Sato for the set-up and tear down of the competition and judging and scoring that made this competition successful. For more information about Culinary Arts, contact the department at 775-673-7132. For more information about Applied Technologies, contact the division at 775-856-5300.