Operation Battleborn: A March Across Nevada 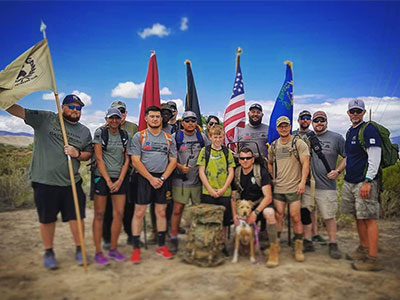 Operation Battleborn participants carry 7,000 dog tags across the State of Nevada to memorialize those who lost their lives while serving our country.

On May 17, the Truckee Meadows Veterans Club is partnering with the University of Nevada, Las Vegas Rebel Veterans for a second annual Operation Battleborn Ruck March that will traverse over 400 miles from the Battleborn Memorial in Carson City to the Southern Nevada Veterans Memorial Cemetery in Boulder City. The event, designed to honor fallen servicemen and servicewomen who have lost their lives since the Terrorist attacks of 9/11, asks participants to physically carry the dog tags of fallen soldiers across the state.

The event, called a “Ruck March” is the first and only event of its kind in Nevada. It also covers more distance than most—traversing Nevada from South to North, which is over a 400-mile journey. The term “Ruck March” is a military exercise in which a soldier marches relatively quickly (around an 11-minute mile) while carrying a loaded pack. Operation Battleborn mimics the ruck in all respects, but one: participants carry the memory of those who lost their lives in the metaphor of the weight in their packs and through the names inscribed on the Operation Battleborn T-shirt.

There are no pace requirements for participating in Operation Battleborn, only that participants complete the nine-mile leg they sign up for while carrying the 7,000 dog tags with them. The amount of weight will vary with the number of people completing a leg: more teammates means less weight (since the tags will be distributed among multiple sacks.)

This year, the event will begin on Friday, May 17 at the Battleborn Memorial on the Capital Mall in Carson City. After a brief ceremony, the journey will begin. The public is welcome to see off the participants for the first mile of the event. The Operation Battleborn website offers this as a preview of what participants can expect: “Participants will be asked to challenge themselves physically and mentally, facing the heat and the weight of the fallen heroes on their backs. Help us as we march for those who fought and sacrificed for our freedom. Just as they never wavered in their service to our country, we cannot waver in our recognition of their sacrifice.”

Walking Through the Desert

During the first Operation Battleborn event in 2018, TMCC Student and Veteran Jeremy Mutua slung the 40 lb. rucksack on his back and, with the company of another Marine veteran, began running toward the next relay point. He’d heard about Operation Battleborn on Facebook months before and decided to sign up. “It sounded like a good opportunity to get involved and to build a connection with other veterans in our community,” he said. Mutua would end up helping VRC Pre-Admissions Associate and Event Organizer Felipe Guiterrez with the event logistics and the coordination of the Quick Reaction Force (QRF) in case a participant is too injured to complete their portion of the journey.

Mutua, though, wasn’t expecting what happened on pole line road, some miles outside of Gabbs, Nevada: when paired with another Marine on the eight-mile stretch of desert, each tried to outpace the other with 40 lbs of dog tags in their packs, and each carrying a flag. “I wasn’t thinking of all the dog tags I was carrying,” he said. “I was thinking of others who had served, and those we lost when I got tired.”

This event isn’t a race, though; it’s a remembrance. This became apparent when the Marine who ran with Mutua held up his hero band—a metal cuff worn around the wrist inscribed with the names of those who lost their lives with whom the wearer served—and kissed it. “This is for Rod,” he said.

TMCC student and U.S. Army Veteran Steven Simi also participated in the event, running several of the “night shifts.” “I wouldn’t have wanted to do it in the desert heat,” Simi said. “It’s easier—at least mentally—in the darkness. You just go until the sun comes up. Then you can see how much farther you have to travel.” Simi described a few run-ins with snakes and scorpions during his legs of the ruck march—legs that he shared with four other teammates—which would begin around 2 o’clock in the morning and end at around 6 a.m.

The emotional part of the event came as the miles narrowed to the Fernley Veteran’s Memorial, where the Ruck March ended last year. Gutierrez remembers a ten-year-old boy asking to carry tags in his bag for the final miles of the march. “I was distributing the dog tags and the little kid comes up to me and opened his backpack. He actually hiked three miles with 20-25 lbs. on his back as though it was nothing,” said Gutierrez.

At the Fernley Memorial, family members of those who lost a loved one gathered around the marchers, searching their shirts for a recognizable name. One woman who lost her son was put in contact with a veteran who had served with him. “They FaceTimed at the ceremony,” said Gutierrez. “It was an emotional moment.”

The Ruck March is, in part, a fundraising event for the non-profit organization Honor Flight that transports veterans to Washington D.C. to see and reflect on their memorials. TMCC students chose this non-profit last year, and donated $1,200 to help fund a voyage “for the brothers who helped to pave the way of life that we live,” said Gutierrez.

With over 400 miles to cover and the heavy symbolism of carrying the dog tags of the fallen, Operation Battleborn is also working to save the lives of Nevada Veterans. “The event gets them off the couch, gets them moving and connects them to a community of like-minded people,” said Gutierrez.

Registration for Operation Battleborn is a $20 donation, which helps to cover the cost of running the event. This year, registration can be completed online. Each leg is approximately nine miles long. Teams may complete a leg together, distributing the weight of the dog tags across every team member. There is no minimum age to participate, but younger participants must have parental consent.

There will be Operation Battle Born Ruck to Remember briefings on May 4 and 11, in the Sierra Building room 108. It is highly recommended that participants attend a briefing where specifics about the type of gear required and logistics will be explained. Participants will also able to pick up event shirts.

There are also training/conditioning sessions that are held on Saturdays at Damonte Ranch Park where participants can train their legs for the miles and the weight while breaking in any new equipment.

“This event pays homage to the weight of the sacrifices that were made, and the pain that you’re walking with—but, that is the pain that people who’ve lost a family member are living with. The event is meant to break you down a little bit, but then you pull together with your team and the overall group, and that’s why we want everyone to come out,” said Gutierrez. “We want you to remember the fallen. To put the ‘memorial’ back in Memorial Day.”

For more information on Operation Battleborn, visit their Facebook page or contact the Veterans Resource Center at 775-337-5612.