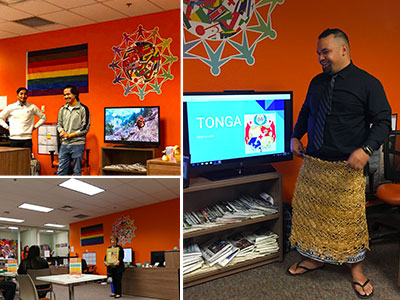 International Coffee Hour is a bimonthly speaker series in which participants share stories of travel and culture.

Imagine you’ve been riding a bike for several hundred miles over the course of three weeks. You’re alone in foreign countries and aside from your backpack and $10 tent, you have learned to rely on the elements to get you from one point to the next. Your goal: to ride 600 kilometers—from Albania, following the Adriatic Sea through Montenegro, Croatia and finally to Budapest, Hungary—in four weeks, spending no more than $550. And, you’ve just experienced your fourth flat tire of the day.

That’s the experience that TMCC JumpStart Dual Credit Specialist Elizabeth Loudon described in her presentation for the International Coffee Hour—a speaking series that invites TMCC students, faculty and staff to share their experiences abroad. Loudon’s experience highlights what she describes as the “cognitive dissonance” that happens when you travel. “Traveling enables you to expand your boundaries, to consider situations in a more open-minded way,” she said.

Loudon’s presentation falls in line with the event, which began in the spring of 2018 when International Student Advisor Virag Nikolics had the idea of creating a shared space where culture and community are communicated through story. The event began with the International Peer Mentors sharing the experiences in their home countries, and the places to which they had traveled. “It started so small,” said Nikolics, “but the event has grown to include 15–20 regular participants interested in listening and sharing their experiences.”

Sponsored by the International Student Services and Equity, Inclusion and Sustainability Office, the bimonthly event showcases culture from a personal perspective and invites participants to literally “taste” the culture speakers present on. Loudon’s talk featured figs and fig jam—since sampling figs from trees along was a highlight of her journey.

Yet, it was more than figs and flat tires. Loudon’s turning point happened when soaked by rain and carrying her bike on the shoulder of a road to a nearby train station, she lifted her hand to ask a passing motorist for help. “They were really wonderful people,” she said of the married couple who stopped and gave her a ride. “I learned a valuable lesson—you can’t get mad at people for not helping you if you don’t ask them for help in the first place.”

The world, she says, is a place where, no matter where you find yourself, you’re likely to be surrounded by good people. The series, through its tight-knit and welcoming community-vibe, says exactly that.

Jefferson Phillips Retana is a TMCC International Student from Costa Rica. He, like Loudon, has done a presentation for International Coffee Hour. “It’s important to be able to convey information about a culture,” he said. “People are invested in the lives of others, and they care about culture—about who I am and where I’m from.”

Phillips, who is also a student blogger for StudyUSA, admitted to facing up to a few challenges with not only studying in a foreign country but also to learning how to cook. “It is necessary to do well in the academic aspects, and so it is to become independent, to adjust to cultures, to organize one’s time and more importantly, to learn how to cook.” His Gallo Pinto, a Costa Rican traditional beans and rice dish, however, brought a little of his home to TMCC.

He continues to attend the series, he says, because the presentations are a source of inspiration. “I was inspired to do something like [Loudon],” he said. “I am thinking of trying to volunteer in Africa for 100 days.”

Other students echo Phillips’ sentiments: Valeria Saborio, who is also an International Student from Costa Rica, said: “It’s an eye-opener—[the presentations] are about all the things you can perceive in the world. To bike several hundred miles through four countries… to hear that, it was like we went through it, too. It was like going on a journey. The series opens up other countries, and our perception of them.”

The “WHY” of Travel

At the most recent International Coffee Hour, Professional Development Manager Cathy Brewster encouraged the audience to reflect on the reasons—and rewards—of travel. “Travel is about meeting people and having enriching experiences,” she said. “I’m trying to encourage others to ideas of how to enrich their experiences abroad—to inspire a more authentic kind of human connection.”

Brewster, who began traveling in the 1970s, shared her experiences traveling to France, Italy and Wales, and what she learned from each experience. She attended cooking schools in both Italy and France. “I was the only American in the classes, but I learned to cook like the locals,” she said. The experience of mixing cuisine and culture impacted her for life.

Her most recent trip was inspired by her study of her family’s genealogy. Her research led her to a small Welsh town where her ancestors had lived generations before. Standing in the open meadow where her family’s farm once stood was “emotional,” she said. Using online sources, she was able to connect with a local expert who brought her to her ancestor’s farm and, later, a site that local lore suggested was the spot where the legendary King Arthur married Guinevere.

“People want to share their stories,” said Nikolics. “The DISCO is an inclusive, and safe environment. And it is so amazing to see what this series has evolved into.” International Coffee Hour embraces the mission and vision of the College by bringing people together in an effort to share experiences and to inspire each other to continue the journey of lifelong learning. The series will continue through the Spring Semester and start again in the fall.

If you have an hour and want to experience something extraordinary (with snacks), stop by one (or all) of the upcoming International Coffee Hours. And who knows? Maybe this will spark your next great adventure.

For more information on the International Coffee Hour, contact international@tmcc.edu.