TMCC Day at the Legislature 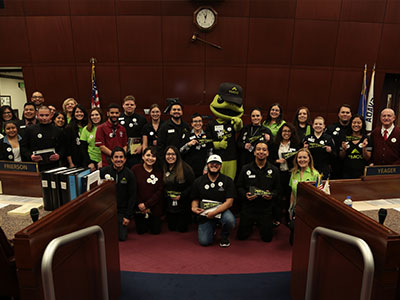 TMCC students, staff and Wizard the Lizard visited the Nevada Legislature on March 4.

Legislature is the heart of Nevada government

The Nevada Legislative session began on February 4 of this year; the reason why students—and mascots—make the journey the Legislative Mall in Carson City is so that they can share their stories—and concerns—with their elected officials. Nevada is only one of four states that conducts true biennial sessions, which means that the Legislature meets only on odd years—and during those sessions, meetings occur for 120 days. This grants organizations like TMCC a window of opportunity to have their voices heard.

TMCC Student Carmela Hailey, who is majoring in Biotechnology and who works in the President’s Office, said that this was her first trip to the Nevada State Legislature. “It was really cool to experience the fast-paced environment there,” she said. Hailey joined several of her peers in the hallways of the Legislative building where they waited to meet Representatives and Senators on their way to and from meetings.

“I was able to speak with Senator Ben Kieckhefer,” said Hailey. “I told him about how I am a transfer student and we discussed how my credits transferred over perfectly. I also overheard a lot of the conversations other students had with Members of the Assembly and Senators, and they were all really interested in what they had to say.”

TMCC Graphics Design major Katelyn Brooke also spoke with Senator Kieckhefer who asked Brooke about her degree. “He was very interested that I wasn’t a political science student, but a graphic design major. He was also happy to hear that the Graphic Arts & Media Technology degree is being expanded to a three-year Advanced Certificate and Bachelor’s degree at TMCC.”

“This was the first time I’ve been to the Nevada Legislature, and it was an amazing experience,” said Curl. “I’m glad I was able to speak to representatives and lobbyists who gave me insight on how I can pursue a career in politics.”

The event was also attended by several staff; Elena Bubnova, Associate Vice President of Research, Marketing and Web Services said that the day was about more than sharing student success. “TMCC Day at the Legislature is not only a fun and enriching experience for our students to witness firsthand the state legislative process, but it is also a unique opportunity to tell the TMCC story in the Capital and share the tremendous work that the College does for the community,” she said.

This is the first year TMCC has made its presence known on the Legislative Floor, joining other Nevada System of Higher Education Institutions like UNR and UNLV. Senators and Members of the Assembly took note of the bright-green attire worn by students and Wizard. Assemblyman Howard Watts tweeted: “You’d have to be cold-blooded to turn down a photo with Wizard.”

We think so, too.